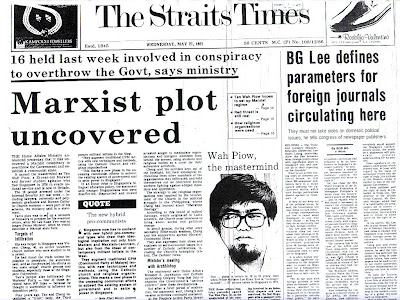 May 21st 2010 marks the 23rd anniversary of the "Marxist Conspiracy" arrests and detention-without-trial of 22 young professionals in Singapore. The following are excerpts of accounts by the ex-detainees in a book published last year entitled That We May Dream Again. 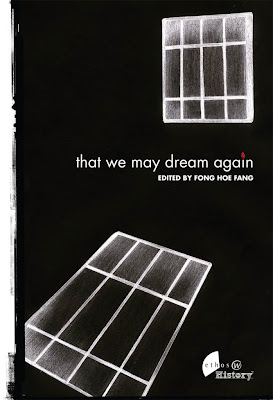 Tacked on one wall of my prison cell was a large poster with these words in bold red:

"Jesus said: Blessed are those who are persecuted for justice's sake, for theirs is the kingdom of heaven. Blessed are you when people revile you and persecute you and tell all kinds of evil lies against you because you are my followers. rejoice and be glad, for your reward is great in heaven."
I took this quotation from Matthew 5:10-12; it was to remind myself of the reason for my detention under the Internal Security Act (ISA). This had begun with my arbitrary arrest at my home on Thursday 21 May, 1987, at 5am by about eight officers from the Internal Security Department (ISD). Being under ISA meant being deprived of my right to a fair and open trial.

"You acted in a manner prejudicial to the security of Singapore by being the central figure in the Marxist conspiracy, masterminded by Tan Wah Piow, to subvert the existing social and political system in Singapore, using communist united front tactics, with a view to establishing a Marxist state ... by violent means, if necessary."

This and other allegations against me would have been demolished in an open court. But alas, under the ISA, I, along with 21 detainees, were denied judicial review and subjected to arbitrary treatment in detention. Most of us bear the physical and psychological scars to this day. 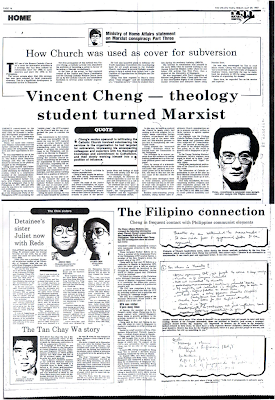 For me, the trauma is insidiously lodged in the subconscious, even after the passage of 21 years. I still feel angry at the injustice of the whole incident, and that the perpetrators have not been brought to account. "Operation Spectrum" was political rape.

I cannot forget, nor forgive, the harsh treatment meted out to me in prison to extract information – the freezing room, the slapping and the beatings, including the blow to my abdomen.

That last act which triggered my abject subjugation haunted me for a long time.

To mitigate the duress, I decided to allow myself to be abused and bullied into writing tracts of self-incriminating lies and half-truths. It seemed less painful to surrender in the interrogation room, but it was more painful when I was put back into the cell.

There I would shed tears, stemming from my sense of utter powerlessness, loss of self-esteem, and constant worry over how my "confession" would harm others. The government onslaught resulted in 3 years of imprisonment, 5 years of restriction orders, a fine of $87,000 and other painful consequences for me and my family.

People have advised me to let go, to forgive and forget, to move on with life. But I ask myself: Why should I? To close the issue is tantamount to condoning the injustice. I can understand why the Nanking massacre survivors and the Korean comfort women are still fighting for justice today. Victims of injustice must not give up the fight to regain their dignity. I believe that forgiveness and letting go is genuine and meaningful only when justice has been, or is seen to have been, done. And if justice cannot be done, then the forces of karma will take over. The law of nature will prevail. 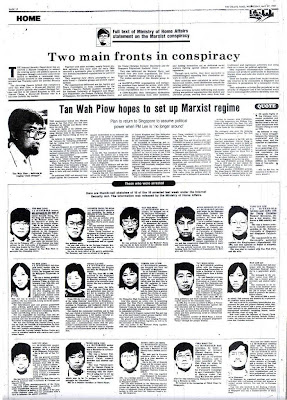 “Are you a Marxist?

“Are you a Marxist?”

I felt cold, very cold and numb. Surely this can't be real, this can’t be happening. But the blows to my face kept coming after every reply.

Men kept coming and going out of the room, talking among themselves, barking at me, shaking their heads. J.T*, another little man with a moustache, the case officer. T.*, a little woman, his assistant case officer. Long Jaw, who slapped me with powerful swings of his arm and the full force of his body behind every blow.

I wanted to forget it all but I couldn't. It was humiliating. I was crying out that it was totally unwarranted. Were they stupid? Marxist? Me? I tried to tell them what I am – a Catholic.

But they were not interested in my answer, but continued hitting me and dousing me with cold water in an air-conditioned room. 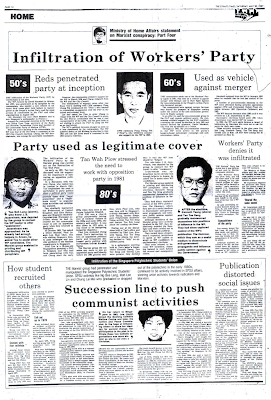 The knock on the door
by Kevin De Souza

Then came the knock on the door at 5am on 21 May 1987 which indelibly changed my life.

My father stood beside me in his shorts and singlet, in total shock, and asked me what I had done. My immediate reply: "Nothing, I have done nothing wrong."

The period of detention turned out to be the most traumatic years of my life – the strip search, the blindfolds, the interrogations in the cold room, the sleep deprivation, the television interviews, the slaps on the face, the three-legged chairs I was forced to balance on during the initial interrogations, the solitary confinement and, most of all, the fear of long-term incarceration without trial.

This experience would haunt me for may years after my release - the constant fear of being re-arrested under the ISA and the guilt of not withstanding the pressures of interrogation and detention. Such detentions are meant to break a detainee's spirit and diminish his or her effectiveness upon release.

The impact on me was profound. Detention sapped my confidence in my own abilities and strengths. The question would constantly surface : Could I cope with another round of arrest, interrogation and detention?

Through all this, other constants helped me survived those dark years - the unwavering support of my then girlfriend and now wife, Lucy, my parents and sister, and the immense solidarity of people on Singapore and around the world.

This community spirit meant we were never forgotten and never alone. In prison, we tried to maintain a strong bond. Separated by the high walls of our cells, the detainees would sing to one another on most nights to keep our spirits up.

Relatives and friends who were unable to visit us would stand 100 metres away from the gates of Whitley Road Detention Centre just to catch a glimpse of us and to wave to us for a fleeting 10 seconds, when we walked to the visitors' room. I remember seeing my good friend, Joseph Ng, on a showery afternoon, and on another occasion, my elderly godparents, Jenny and Stephen Yeo, shouting and waving frantically to me.

Straits Times of May ’87 – Four days of government statements on “Marxist Conspiracy”
http://www.theonlinecitizen.com/2009/05/straits-times-of-may-87-four-days-of-government-statements-on-marxist-conspiracy/

Detention of journalists and lawyers under the ISA
http://singaporerebel.blogspot.com/2007/03/detention-of-journalists-and-lawyers.html

The ISA as a political tool
http://singaporerebel.blogspot.com/2007/02/isa-as-political-tool.html

Sir, you have my absolute respect.

Not difficult to believe what these animals did to you during that time. The younger generation is ignorant of what's going on around them. They are only interested in iphone and ipads. Nobody is concern about Singapore and that's why I left Singapore years ago to become second class citizen of another country.

It's better than becoming a third class citizen of your own country.