The day when Singapore became part of Malaysia

Part l of the retrospective on Singapore's road to independence.

Before its own independence in 1965, Singapore had officially ceased to be a British colony when it decided to merge with its northern neighbour. On September 16, 1963, the new nation of Malaysia was born, comprising of Federation of Malaya, Sarawak, Sabah and Singapore. This was how the Straits Times reported the event. 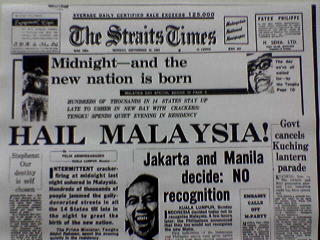 Intermittent cracker firing at midnight last night ushered in Malaysia. Hundreds of thousands of people jammed the gaily-decorated streets in all the 14 States till late in the night to greet the birth of the new nation.

The Prime Minister, Tengku Abdul Rahman, spent the evening quietly in the residency.

In all States colourful parades will be held this morning when the new Malaysia flag with 14 stars will be ceremoniously unfurled.

Singapore's big moment will come when the proclamation is read on the City Hall steps at 5 p.m. 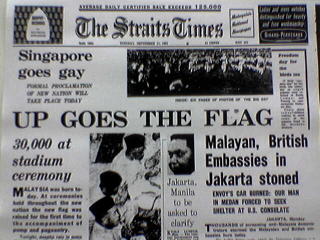 
Malaysia was born today. At ceremonies held throughout the new nation the new flag was raised for the first time to the accompaniment of pomp and pageantry.

Tonight, despite rain in some areas, the territories of Malaysia were a feast of light and colour and sound as 10 million celebrated.

More than 30,000 people Kuala Lumpur jammed the Merdeka Stadium in the early hours of the morning to witness the history-making Malaysia inaugural ceremony.

In Singapore, the moment of history was when the Prime Minister slowly intoned: "Now I, Lee Kuan Yew, the Prime Minister of Singapore, do hereby proclaimed and declare, on behalf of the people of Singapore, that as from today, the 16th day of September 1963, Singapore shall forever be a part of the sovereign and independent State of Malaysia, founded upon the principles of liberty and justice and ever seeking the welfare and happiness of her people in a more just and more equal society." Then to the strains of "Negara Ku", the Malaysian flag was raised. 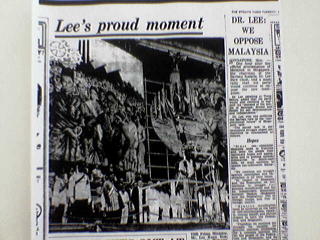 The Prime Minister, Mr. Lee Kuan Yew, makes his Malaysia proclamation from the City Hall Steps against a backdrop of a Malaysian multitude marching forward hand-in-hand.

This was Mr. Lee's proudest moment, and as read out the proclamation his voice shook with emotion and tears welled up in his eyes.

Independence through merger was the aim of the Premier and his People's Action Party which swept to power in 1959. This was his day of "fulfilment."

One hour after the official proclamation of Malaysia in Singapore, the chairman of the Barisan Socialis, Dr. Lee Siew Choh, told a mass rally that his party would continue to oppose the new federation.

Dr. Lee, speaking at Tiong Bahru, added that his party would also continue to support the "demand of the people of Sarawak, Brunei and Sabah for self-determination and independence."

Dr. Lee, who was outlining the Barisan view on the "constitutional future" of Singapore, said:

"We continue our struggle against colonialism and imperialism in all their forms."

"Genuine reunification must be achieved on the basis of self-determination, equality, mutual benefit and mutual respect to both the Federation and Singapore.

"Therefore we continue our struggle for equality, for genuine common citizenship, for a common political life for the people of the Federation and Singapore; and we continue to safeguard and protect the economic interests of the people of Singapore.

"Self-determination must of course include the immediate and unconditional release of all political detainees (especially those detained because of their anti-Malaysia activities) and the normalisation of all political life and activities in the country.

"Self-determination must include the restoration of all the fundamental rights of the people, including the freedom of travel, speech and publication, association and assembly.

"Self-determination must include the right to pursue an independent foreign policy of neutralism, and to oppose colonialist or neo-colonialist blocs, whether functioning under Malaysia or Seato.

A HISTORY book that attempts to account for the bitter and turbulent separation between Malaysia and Singapore in 1965 is trying to gain entry into the Malaysian market from across the Causeway.

Malaysiakini has learnt that the book, titled Ousted!, is authored by "an extremely well-informed ex-insider" Patrick Keith, a Kuala Lumpur-born former journalist in both Malaya and Malaysia who has since migrated and settled in Australia.

Since then many conflicting versions of political speculation and academic hypotheses have been advanced to explore the real and exact reasons for the dramatic merger and separation in the 1963-1965 period.

Sources in Singapore who have read the manuscript told malaysiakini that besides the subject-matter, the author himself could still be considered 'sensitive' or 'controversial' in Malaysia because Keith personally knew all the major decision-makers of the event on both sides of the Causeway, including former Malayan/Malaysian prime minister Tunku Abdul Rahman and former MCA president Tan Siew Sin.

It is understood that Keith once held the high-ranking post of deputy director of external information in the Information Department of independent Malaya/Malaysia until 1968, three years after the acrimonious merger and separation.

Besides, the sources said, the book was published by none other than Singapore's Media Masters whose husband-and-wife team also co-authored and published Alias Chin Peng: My Side of History.

Meanwhile, malaysiakini has learnt that Keith's book has been sent to the Internal Affairs Ministry in Kuala Lumpur for preview before it is released for sale and that the ministry has received 'complimentary copies' of the book since yesterday.

The Singapore-based Media Master, owned and operated by veteran Australian journalists Ian Ward and Norma Miraflor, published both the English and Chinese editions of Alias Chin Peng: My Side of History.

When the original English edition of Alias Chin Peng: My Side of History was first imported into Malaysia from Singapore, it instantly created public controversies after some 900 copies were reportedly seized at the Malaysian custom in Johor Baru and another 17 copies from a major bookshop in Kuala Lumpur.

However, the Home Ministry later issued a public statement clarifying that the book is not banned.

However, the legal suit was later settled out of court with the newspaper serialising the Chinese excerpts of the memoirs for about two weeks.

Later, Media Masters and Chin Peng himself had the English memoirs translated into Chinese in full by a team of 12 Malaysian translators.

The Chinese edition of the memoirs has been on public sale in Malaysia without any controversy since Nov 2004.