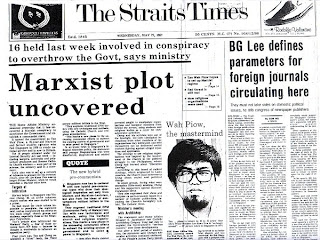 To mark the 25th anniversary of their arrests under the Internal Security Act in a security swoop (now widely acknowledged as a political clampdown) codenamed Operation Spectrum, a group of former detainees have started a blog and are planning a series of public activties.

The blog That We May Dream Again, Remembering the 1987 Marxist Conspiracy was launched on April 15th. Its first post, "Shock and Awe : Enthralling a Nation", provides an overview of the arrests.

While the entire nation was entertained by the live telecast of the first- ever- held Miss Universe contest in Singapore late into the night of 20 May 1987, the secret police had been hard at work from dawn. Hound-like ISD agents fanned out all over the island, trailing 16 peaceful, unarmed people to arrest them in the early hours of 21 May 1987. It was the “shock and awe” tactic – loud and continuous bangings on doors in the still of the night, waking up the dead, shocking all and sundry into a paralysis. Handcuffed and blindfolded, the 16 were escorted to the Whitley Road Detention Centre.

A public event, to be held at the Speakers Corner on May 19th, will feature speakers, performers and exhibitions. Details below taken from the facebook events page.

That We May Dream Again

Come join us at an open air exhibition from 4pm to 7pm on Saturday 19 May 2012 at Speakers’ Corner, Hong Lim Park to remember the 25th anniversary of the 1987 “Marxist conspiracy”.

Participate in guided tours through a unique open-air exhibition detailing the lives of the 1987 survivors before and after their ISA detentions.

Walk through mockups of Whitley Road Detention Centre and go back in time with original artifacts and memorabilia from those ISA arrests a quarter century ago.

“Lim-kopi” with survivors of the 1987 “Marxist Conspiracy”, ask questions and get answers directly from activists who had been silenced 25 years ago.

Buy a host of newly published books by social activists who has never-before-told public stories of how they slipped the ISD dragnet, left the country, and are now in exile.

3pm to 4pm: Arrival and informal chit-chats.
4pm to 5pm: Sharing and reflections by speakers from various sections of Singapore
society. All speakers do so in their individual capacities.
5pm to 6pm: Guided tour of open-air exhibition and exhibits
6pm to 7pm: “Lim-kopi” with survivors of the 1987 “Marxist Conspiracy”

Come and help raise awareness on the potential abuse of the ISA.
Your presence will help reconcile past hurts and unify Singapore again.


There are three things you need to know about Singapore.

1. The only political violence that has happened in the last 45 years in Singapore are the ones inflicted on political prisoners behind the walls of the Internal Security Department.

Links :
Political detention in Singapore : Prisoner case histories
The ISA as a political tool
Life in Singapore's political prisons
Surviving long-term detention without trial
Detention of journalists and lawyers under the ISA
A detainee remembers

2. The Internal Security Act has been abused (to serve political ends) more often than it has been used appropriately (to safeguard national security).

23 years after Operation Spectrum : Ex-detainees recall mental and physical abuses
I'll forgive Lee Kuan Yew if he admits to his error and apologises to me : Lim Hock Siew

3. The people and the institution responsible for the political violence and the abuse of ISA are still in power today. Open discussions on such topics remain sensitive, and even outlawed, in Singapore.