"Some of you may have heard that when you are young you are idealistic, when you're old you are realistic. Now this is the kind of rubbish that is used by those who have either lost their ideals or have sold their ideals for self-interests. Each should not wither one's ideals or convictions. If anything, it should only consolidate and make it more resolute. If age has anything to do with it, it is only by way of expression and application of these ideals and convictions having the benefit of a youthful experience. And a life without convictions, without idealism, is a mere meaningless existence, and I'm sure most of you will agree that as human beings, we are worthy of a life much more meaningful than just that." 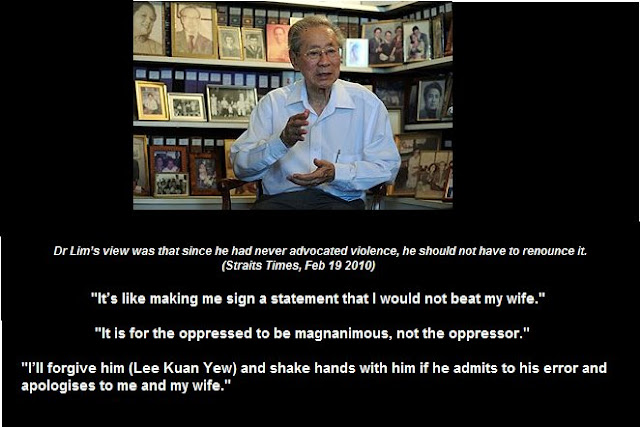 Ex-political prisoner speaks out in Singapore (Banned in Singapore) from sotong on Vimeo. 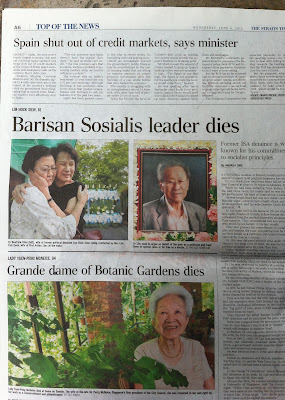 A founding member of Barisan Sosialis and one of Singapore's longest-held political detainees has died.

Dr Lim Hock Siew died from heart failure in Parkway East Hospital at close to 10.30pm on Monday. He was 81.

While he had been suffering from kidney failure for the past three years, his family said he was fine until he fell and bumped his head at home about a week ago.

He was hospitalised but was in a stable condition until Monday night, when he had a heart attack and could not be resuscitated, said his wife Beatrice Chen, 80, a kidney specialist.

At the wake held in his home at 135 Joo Chiat Terrace last night, dozens of friends, fellow former detainees and colleagues from the medical fraternity streamed in to pay their respects. They remembered him as a principled man who stood by his beliefs to his last breath.

They also praised his commitment to socialist principles and helping the poor, recounting how he had argued on their behalf as a politician and treated them at special rates or for free as a doctor.

Dr Lim was detained without trial under the Internal Security Act from 1963 to 1982. He was the longest-held political detainee after Dr Chia Thye Poh.

Fellow Barisan founding member Poh Soo Kai, a close friend from their days in medical school, said: 'We've lost someone who stood firmly for democracy and human rights. He was imprisoned for so long and even though he couldn't be with his child, he stuck to his beliefs.'

Dr Lim was awakened to politics at a young age. The son of a poor fishmonger, he made it to medical school at the then-University of Malaya, where he plunged himself into campus activism.

He was a founding member of the anti-colonial University Socialist Club (USC) and a leader of the university's student union.

In 1953, he met former Prime Minister Lee Kuan Yew, then a young lawyer helping to defend eight USC students charged for sedition by the British.

They won the case and the USC rallied behind Mr Lee and his associates when they formed the PAP in 1954. However, ideological differences in the PAP resulted in the 'big split' of 1961, when 13 PAP assemblymen were expelled from the party.

They formed the leftist Barisan Sosialis with other PAP defectors and Dr Lim joined the party with Dr Poh.

Both men resigned from the government medical service to start Rakyat Clinic (rakyat is 'people' in Malay), which still remains in Balestier Road.

In Barisan, Dr Lim was a key player in the leftists' battle with the PAP over the proposed merger with Malaya.

But on Feb 2, 1963, Dr Lim was among more than 110 leftists and unionists detained under Operation Cold Store, a government security exercise aimed at communists and suspected communists.

Fellow ex-detainees and Barisan members such as Mr Tan Mui Hua, 70, and Mr Wee Toon Lip, 76, yesterday recalled that Dr Lim had been a natural leader even in detention.

In the Changi 'E Dormitory' which housed more than 100 detainees at its peak, Dr Lim provided medical care to those who fell ill, they said.

His son Yue Wen, 50, a senior administrator at National University of Singapore, told The Straits Times last night: 'When I was growing up, my memories of my father were more of me visiting him (in prison) and getting to know him. It was tough - kids can be quite cruel and I didn't know how to explain his absence.'

He only got to know who his father was 'in my adultyears... when I asked him questions and read his oral history transcript'.

Dr Lim's detention was raised by several people yesterday as an unresolved issue.

Fellow detainee Fong Swee Suan said: 'He really served the cause. Actually, he never did anything that broke the law, everything he did was according to the Constitution.'

Asked what he last talked about with Dr Lim, Mr Fong said: 'We are so old, whatever we can do we already have done. What is there to say?'

Top eye surgeon Arthur Lim, who was his medical school classmate and had visited Dr Lim in prison, said: 'He was arrested without trial and what he did wrong is not clear up to now. Maybe someone should clarify that.'

She added: 'Future generations of Singaporeans will likely hold diverse views about Dr Lim's contribution to the country's past and politics.'

Minister of the Environment and Water Resources Vivian Balakrishnan, who was at the wake, described Dr Lim as a 'good and honourable man'.

Dr Lim is survived by his wife, son, daughter-in-law and a 17-year-old grandson, both of whom declined to be named. 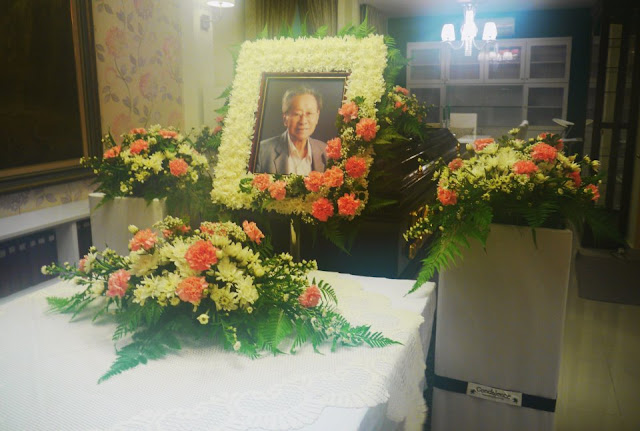 "He was a good and honourable man": Vivian Balakrishnan

Dr Lim Hock Siew: The passing of a patriot