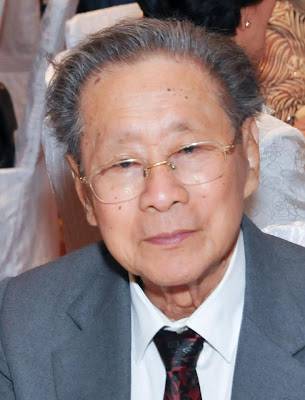 This is the original letter that was sent to The Straits Times:

"I am saddened to read the news of the passing of Dr Lim Hock Siew. Nevertheless, I am glad that the Straits Times carried a decent report of his demise, "Barisan Socialis leader dies" (ST 6 June), which would at least remind Singaporeans of pioneer political leaders who had fought for Singapore's independence and argued for a different political vision.

As a young lad in the 1960s, I first heard about Dr. Lim from my father who spoke highly of him and his political conviction. My father used to share a stall with Dr Lim's dad, selling fish at the old Tekka Market. Like most people working in the market, my dad did not have the opportunity to attend school. But he was impressed with Dr Lim's academic progress and achievement. More than that, my dad respected Dr Lim for his political conviction and his genuine care for the poor, for example, seen in the low-cost medical treatment that he gave to those who consulted him in his clinic at Balestier Road. Needless to say, like many poor, and usually less-educated people, my dad and mum went to his clinic whenever they needed medical care.

It is a tragedy that he had to be detained in prison without trial for almost 20 years. One day, I hope, his side of the story will be given a fairer hearing, and a respected academic will write a properly researched book of the contribution of political leaders like him. It speaks volume of his character that in spite of his incarceration, he kept his conviction and stood his grounds; qualities which people who aspire to political office should have. One may disagree with his political ideology, but he will be respected by those who know him as a politician who loved his country and cared deeply for the cause of the poor."

The edited version published in ST Forum was this: 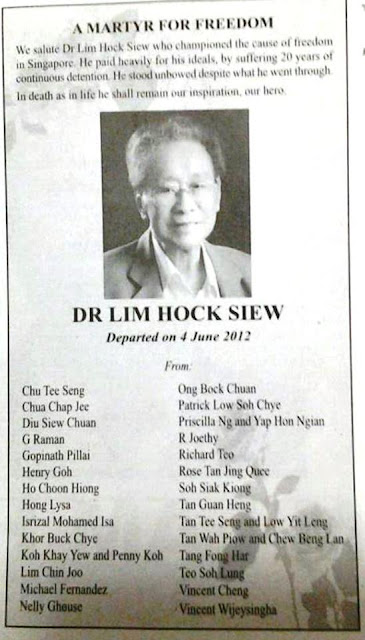 Mr Tan, 71, recalled of Dr Lim: 'He often said, 'They can imprison my body, but they cannot imprison my spirit'.'

Dr Lim, a founding member of the PAP and Barisan Sosialis, was detained without trial under the Internal Security Act from 1963 to 1982.

That made him Singapore's longest-held political prisoner after Dr Chia Thye Poh.

A medical doctor by profession, he died of heart failure last Monday at the age of 81.

Mr Tan was one of three who gave eulogies yesterday afternoon at Dr Lim's funeral.

Held at his Joo Chiat Terrace home, the funeral was attended by a crowd of more than 100 people, some of whom made a special trip here from Malaysia and Australia.

The largely white-haired group of old friends and comrades spilt out of the house and onto the road. They remained standing in the open to listen to the eulogies even when it rained midway through the proceedings.

Smiles broke across the faces of those gathered, several of whom had also spent time at Changi, when Mr Tan recalled in Mandarin old jokes they had shared.

Dr Lim once told Mr Tan: 'All these years, my body may be in prison, but I often also tour the world. I can travel in spirit.'

Mr Tan said Dr Lim's humour and optimism had given strength to his fellow detainees.

Dr Lim was the founder of the Rakyat or People's Clinic in Balestier Road.

He returned to medical practice upon his release from detention and would not collect money from patients who could not afford to pay.

Remembering his friend, Dr Arthur Lim said: 'Hock Siew's big contribution was that he cared very much for his patients... He was a great doctor.'

The eye surgeon said he and several other old friends would write a book on Dr Lim Hock Siew's life, so that his story would not be lost.

Dr Tan Cheng Bock wrote in a Facebook post that the man should be honoured for making sacrifices for his beliefs.

Mr Tan Jee Say, who spoke at the funeral, said that Dr Lim was his inspiration to pursue politics.

After the eulogies, the cortege moved off in the rain to Kong Meng San Crematorium.

After the body was consigned to the flames and the crowd dissipated, another former detainee Lim Chin Joo, 75, said: 'It is a loss to the country that a man like him could never have the opportunity to contribute to nation-building.'
Posted by MIng at 1:34 PM