Year of the Political Films

Yeah, but try making one in Singapore ...

Street Fight is a chronicle of a rough and dirty Mayoral campaign in Newark, NJ that pitted the young reformer and Rhodes scholar Cory Booker against the old-style political machine of incumbant Sharpe James. The film is currently touring with the Human Rights Watch International Film Festival with upcoming screenings in Berkely, Philadelphia, and Cincinnati.

Syrianna is political thriller that unfolds against the intrigue of the global oil industry. From the players brokering back-room deals in Washington to the men toiling in the oil fields of the Persian Gulf, the film's multiple storylines weave together to illuminate the human consequences of the fierce pursuit of wealth and power.

Adapted from the novel by John le Carre, The Constant Gardener is a romantic thriller that sweeps audiences along one man's emotional and global journey to uncover the truth behind a personal loss and a worldwide pharmaceutical conspiracy.


The world was watching in 1972 as 11 Israeli athletes were murdered at the Munich Olympics. This is the story of what happened next. Based on the true story of the Black September aftermath, Munich is about the five men chosen to eliminate the ones responsible for that fateful day 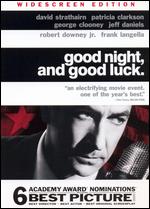 Good Night, And Good Luck chronicles the real-life conflict between television newsman Edward R. Murrow and Senator Joseph McCarthy and the House Un-American Activities Committee. Murrow, and his dedicated staff defy corporate and sponsorship pressures to examine the lies and scaremongering tactics perpetrated by McCarthy during his communist witch-hunts. In this climate of fear and reprisal, the CBS crew carries on and their tenacity will prove historic and monumental.

Paradise Now is about two Palestinian men preparing for a suicide attack in Israel.

The biggest upset of this year's Oscar race may have already happened.

"Penguins," which leads this year's pack of Oscar nominees for best documentary feature, may portend much -- beyond the obvious fact that everyone loves a bird in a tuxedo.

It suggests that documentary film -- until recently a category on par with "best sound design" in terms of audience interest -- is fast coming of age.

"I think there's obviously a big appetite of Americans who want to understand the world in greater depth than they get in their television news or newspapers," says Thom Powers, who programs documentaries for Toronto International Film Festival.

"Penguins" is the obvious Oscar front-runner in a year that also includes such worthy documentaries as "Enron: The Smartest Guys in the Room," "Murderball," "Darwin's Nightmare" and "Street Fight."

But "Penguins" is also in many ways an oddity, not unlike the flightless bird it documents.

It played in 2,506 theaters domestically -- as opposed to the 97 theaters that played "Murderball" and the 80 to 100 that played "Darwin's Nightmare," much more typical numbers for a documentary film. It was distributed by a major Hollywood player -- Warner -- as opposed to independents like THINKfilm ("Murderball") and International Film Circuit ("Darwin's Nightmare").

It also had a G-rated family appeal that none of the other documentaries -- for that matter, none of the fictional features -- could match.

"It's a movie you can take the whole family to," Powers says. "It's beautifully shot, and it's hard to compete with the cuteness of penguins."

Films like "Penguins," reaching beyond the standard documentary audience, have given the whole genre a shot in the arm. Since 2002, the stock of the Best Documentary Feature category has steadily risen -- fueled by a handful of films that, for one reason or another, have captured the public imagination.

"I think we live in pretty serious times, and I think in serious times people are interested in issues," says Fred Simon, executive producer for the Center for Independent Documentaries, based in Boston.

Several of this year's nominees are clearly "issue" movies.

"Enron: The Smartest Guys in the Room," by Alex Gibney of Summit, gives an in-depth look at the predatory mega-company whose crooked dealings (and connections to the Bush administration) are still front-page news.

"Street Fight," by another Summit native, Marshall Curry, is a look at the down-and-dirty politicking in Newark's mayoral race four years ago, in which five-term Mayor Sharpe James swift-boated newcomer Corey Booker using every smear in the book.

The two other films might be considered "feel good" documentaries.

"Murderball," by Dana Adam Shapiro and Henry Alex Rubin, about quadriplegics whose particularly brutal form of wheelchair rugby has become an international sport, is arguably upbeat in a thrash-metal way.

And then there are those penguins -- whose tender nurturing of their offspring through a brutal Antarctic summer has so touched audiences.

The schism between the two kinds of documentaries -- upbeat vs. downbeat, "feel good" vs. investigative or propagandistic -- is as old as the documentary film itself.

As far back as the 1920s, Hollywood documentaries like Robert Flaherty's 1922 "Nanook of the North" (about the struggles of an Eskimo family) and Merian C. Cooper's 1925 "Grass" (about migrating Iranian tribesmen) captured a large audience by telling simple stories of exotic peoples -- without sermonizing. This is the tradition to which 1950s Disney documentaries like "The Living Desert," National Geographic specials and ultimately "March of the Penguins," belongs.

But early on, others saw the potential of documentaries to expose abuses, right wrongs and plead causes. Films like Pare Lorenz's 1934 "The Plow That Broke the Plains" (about the dust bowl) and Herbert J. Biberman's 1954 "Salt of the Earth" (about the abuse of mine workers) paved the way for Michael Moore and for films like "Darwin's Nightmare" and "Enron" -- all miles away, both geographically and spiritually, from those cute little emperor penguins.

" 'Penguins' comes out of a completely different genre than the other films," Powers says. "It comes out of the natural history genre, the kind of films that National Geographic made famous. In a better world for documentary filmmakers, there would be more than one category of award, something that would put 'March of the Penguins' against other natural history films. It's a completely different kind of filmmaking."

Apart from the pure luck that brought movies like "Penguins" and "Fahrenheit" to audiences at exactly the right time, several other things have converged to create what amounts to a documentary renaissance.

One is the sheer number of documentary films being made right now, thanks to digital video.

That's pretty much how "Street Fight" came about, for instance. Marshall Curry had never made a documentary when he decided to cover the James vs. Booker mayoral race in Newark with his new digital video camera.

"I just bought a camera and convinced the Booker people to let me film their campaign," he says. "I began shooting in January of 2002 and finished in May. It took me three years to edit after that."

The reduced production costs have not only allowed more people to make documentaries, but it has allowed them to make better ones -- by staying with a story longer, Powers says.

"It results in a much richer story," Powers says. "Take 'Murderball' or 'Street Fight,' for examples. What makes those films so satisfying is the really rich narrative that comes out of hanging around for a long time, for every minute you can."

The other thing is the audience itself: starved for solid news and in-depth information in a sound-bite world.

"Enron: The Smartest Guys in the Room" goes into the Enron scandal with a depth and detail that no news broadcast or "60 Minutes" expose could match.

"People are more interested in examining things they're concerned about," Simon says. "I think documentaries are a natural way to do that."
Posted by MIng at 3:31 PM No comments: