"It is good to have a sense of humour but we must take care not to allow humour or satire to mask the key issues. The bottomline is that a sense of humour is necessary but more importantly, we must remember that elections and choice of leaders for the country are serious matters. Elections are certainly not laughing matters."
- Dr Lee Boon Yang, Minister of Information, Communications and the Arts, June 1 2006 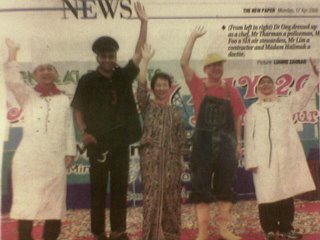 Members of the PAP team of Jurong GRC unveiling themselves to the electorate in a costume parade, New Paper Apr 17, 2006. Jurong GRC was uncontested.

Mr Brown, the de facto spokesperson for responsible blogging in Singapore, whose slogan to bloggers during the recent elections was "Prison got no broadband," has found himself tripping on a landmine beyond the boundaries of the invisible OB markers (out-of-bound markers) of political expression. 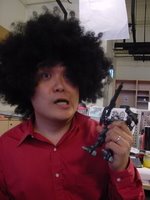 He pens satires, makes fresh and astute observations of social and political life in Singapore, publishes pictures of himself and his family, and receives no salary or official commendation for his labour of love.

She writes in official-speak, makes hackneyed and cookie-cutter arguments on the government's role in Singapore, issues veiled threats under the covers of political office, and for which she gets paid, more than handsomely one suspect, to preserve the status-quo of her employers.

She is now accusing him of being partisan, of hiding behind the covers of anonymity and of encouraging cynicism.

Cherian George, accused of being "partisan" by the Prime Minister's Office just earlier this year, chips in on Bhavani's reply.