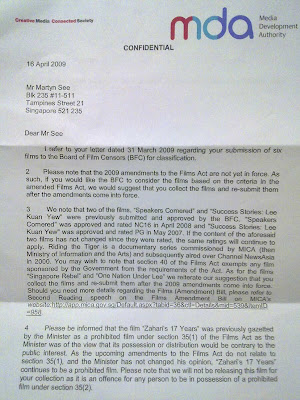 The Government has retained the ban on Zahari's 17 Years.

In a letter hand-delivered to my home yesterday, the Board of Film Censors (BFC) said that the recent Films Act amendments did not cover Section 35 and that the Minister has not changed his position on the film.

The letter also stated that the Films (Amendment) Act is not yet in force and suggested that I resubmit Singapore Rebel after the Act comes into force.

A summary of the ratings made by BFC on my recent submissions of six films. Read my earlier letter here.


The Government's letter in full here

THERE will be no change, for now, to the status of the six films submitted by film-maker Martyn See to the Media Development Authority (MDA).
.
As a “test” of the liberalisation of the Films Act, Mr See had re-submitted three of his films and three from other film-makers to the MDA for re-classification, on March 31.
.
However, MDA’s written reply on Thursday said the “2009 amendments to the Films Acts are not yet in force”, and advised Mr See to “re-submit them after the amendments come into force”.
.
The disappointed film-maker said he had sent in his films “with the intention they would review them based on the new ruling”.
.
He will re-submit Singapore Rebel and One Nation Under Lee after the amendments come into effect, he said, and “hopefully it will be passed and legalised, and Singaporeans can judge and decide for themselves what to watch and what should not be allowed”.
.
However, Mr See will “not pursue” his bid to un-ban the film Zahari’s 17 Years, which is prohibited under Section 35(1) of the Films Act for being contrary to the public interest.
.
The MDA said in its letter, the upcoming amendments to the Act “do not relate to Section 35(1) and the Minister has not changed his opinion”.

ALICIA WONG
Posted by MIng at 9:50 AM No comments:

The 10 Highest Paid Politicians In The World 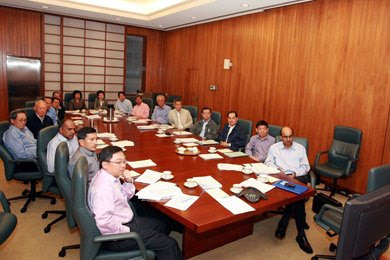 This TimesOnline article gets it all wrong.

In truth, the ten highest paid politicians in the world are all pictured in the above photograph.

Here's the more accurate list (courtesy of My Singapore News)

The 10 most decadent dictators

The 10 people most responsible for the recession