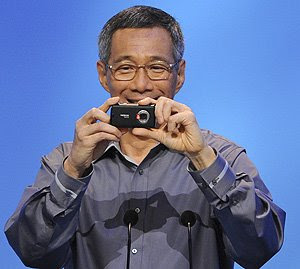 PM Lee filming the audience in the auditorium with a mobile phone. The candid camera moment held a serious point - anyone can now be an amateur film-maker. -- ST


'The overall thrust of all these changes is to liberalise our society, to widen the space for expression and participation. We encourage more citizens to engage in debate, to participate in building our shared future. And we will progressively open up our system even more.'
- PM Lee Hsien Loong, National Day Rally speech 2008

I've just (re)submitted six videos to the Board of Film Censors for the purpose of classification. Enclosed within my applications was a letter to Ms Amy Chua, Head of Media Content at MDA.

I like to draw your attention to the (re)submission of the following films, filed in accordance with Section 14 of the Films Act, for the purpose of (re)classification.

Note that titles #1 to #3 are my productions and they have been previously classified.

Title #4, which your officers seized during its private premiere at the Peninsula-Excelsior Hotel on 17 May 2008, has yet to be rated.

In light of the new amendments to the Films Act pertaining to party political films, I hereby make these (re)submissions in order that the above films be vetted by the newly-created Political Films Consultative Committee.

With regards to Section 35, the outgoing Minister Dr Lee Boon Yang has publicly defended its retention in order to prohibit films like Fitna. This cannot be used as a pretext to continue the ban on title #2 - Zahari's 17 Years - of which I hope the PFCC will now deem it to be a 'factual biography', a classification now made permissable under the new legislation.

The first five seconds of the clip speaks volume about the state of parliamentary debates in Singapore.

NMP Siew Kum Hong stood as the LONE DISSENTER to the Films Act amendments being passed even as Opposition voices in Parliament support the PAP “in principle”.
Posted by MIng at 7:04 PM No comments:

New restrictions to Films Act introduced under the guise of liberalization

The amendments to the Films Act bill has been passed in Parliament. State-owned CNA was the first off the blocks, calling it "a significant step to further liberalize and expand the space for political debate." The Straits Times and others will likely to parrot the enthusiasm, and there will be no end to the Government hailing the amendments as a sign of Singapore opening up.

While I leave the analysis to the bloggers and commentators, I will just spell out here in layman's terms what the amendments really mean to you.


WHAT HASN'T CHANGED IN FILMS ACT

The only major amendment is in Section 33 of the Films Act.

The rest of the Films Act remains largely unchanged. For example, the following sections still applies.

1. Section 14 requires that you submit any video in your possession (this includes video images stored in your handphone and private videos in your collection) to the Board of Film Censors (BFC).

2. Section 21 spells out the penalties if you possesses, exhibits or reproduces any unlicensed video.

3. Section 23 authorizes the police to enter and search your home, seize any unlicensed video(s) and to take into custody any person reasonably believed to be guilty of an offence under the Act.

4. Section 35 empowers the Minister to ban a film deemed to be contrary to public interest. The Government argues that this law would prohibit films like Fitna. In reality, the only film that has been banned under this section is my video interview with former political detainee Said Zahari.


WHAT HASN'T CHANGED IN SECTION 33

Section 33 prohibits the making, exhibition, distribution and import of "party political films", which are defined as videos or films that makes "partisan or biased references to or comments on any political matter." It also states that the penalties for such an offence is a conviction to a fine not exceeding $100,000 or to imprisonment for a term not exceeding 2 years.

In general, the above has not changed. It still applies.

The only change to the above is that instead of the BFC, an Independent Advisory Board will now decide what constitutes "partisan or biased references" . The Board is slated to be headed by ex-district court judge Richard Magnus. The members of the Board have not been announced as yet.

What is "allowed" here, as the Minister and the media gloat, is really a misnomer as there were no prior restrictions on such videos.

1. The new amendment states you can now make a video that contain the whole or material proportion of a political event(s) that are held according to the law. Please note that this new addition is NOT a liberalization as there were no sections in the previous Act that disallowed this. For example, my film Speakers Cornered (2006) was passed by the BFC prior to this new ruling. Ironically, this new amendment may actually criminalize Speakers Cornered as the participants of that protest are now undergoing trial!

2. The new amendment states you can now make political videos that do not contain any animation and must composed wholly of an accurate account of a political event or persons. Again this is NOT a liberalization as there were no sections in the previous Act that disallowed this. In fact, this is a new restriction dressed up as liberalization. Sneaky.


WHAT IS REALLY ALLOWED (where previously banned)

This is the only part that fits the bill of liberalization (but is negated later by more new restrictions).

The new amendment states that you can now make, exhibit and distribute videos composed wholly of a political party's ideologies and manifestos. But here's the catch - the videos must be made "on the basis of which candidates authorized by the political party to stand will seek to be elected at a Parliamentary election." Does this mean that someone like Dr Chee Soon Juan, who is ineligible to stand for elections due to his bankruptcy, is not allowed to appear in such videos? Will something like this be criminalized?


WHAT IS NOW NOT ALLOWED (where previously allowed, or not stated)

Get ready, here are the bombshells.

1. You are now not allowed to make an unbiased and non-partisan political video that contains any form of animation. Like this.

2. You are now not allowed to make an unbiased and non-partisan political video that contains "wholly or substantially based on unscripted or "reality" type programmes." Something like this.

3. You are now not allowed to make an unbiased and non-partisan political video that depicts "events, persons or situations in a dramatic way." Something like this.

4. You are now not allowed to make an unbiased and non-partisan political video that contains scenes of an illegal political event. Something like this.
WHAT WILL NOT BE ALLOWED

You will soon not be allowed to whip out your camera to film an outdoor political activity. The proposed Public Order Act, to be passed into law next month, empowers the police to stop the filming, exhibition or distribution of videos depicting law enforcement activities. Something like this and this.

SINGAPORE (Reuters) - Singapore passed an amended law on Monday to ease an 11-year-old ban on films that promote a politician or political party, but the amendments also introduce restrictions on dramatized political videos.

The relaxation of rules on political films was meant to keep up with the spread of video and other news content on the Internet, but these had to be "held in accordance with the law," Lui Tuck Yew, a junior minister at the Ministry of Information, Communications and the Arts, told parliament.

The amended Films Act allows films that are factual and objective, and do not dramatize or present a distorted picture of politics in Singapore, Lui said.

"Films with animation and dramatization and distort what is real or factual will be disallowed, as the intent of the amendments is to ensure that these films do not undermine the seriousness of political debate," he said.

The southeast Asian city-state, which has been ruled by the People's Action Party for more than 40 years, had banned the production and screening of all political films, imposing a maximum fine of S$100,000 ($73,000) or a two-year jail term on offenders.

The ban came into effect in 1998, two years after the opposition Singapore Democratic Party applied for a license to sell a videotape about the party.

Public gatherings of more than four people without permits are also banned, making it difficult for opposition politicians to reach out to voters.

The amended bill won overwhelming support in a parliament that has been dominated by the PAP since Singapore's independence in 1965.

Nominated member of parliament Siew Kum Hong, who opposed the bill, said the amendments did not go far enough as it would still allow the prosecution of people who film political rallies without realizing whether the event was lawful or not.

"Singaporeans are today far more sophisticated and media savvy than before and should be trusted for the merit and demerit of films for themselves," he told parliament.

Martyn See, a Singaporean film-maker who had two films banned by authorities because of their political content, called the law "regressive."

"It shows off a government that is incapable of trusting its own citizens to watch political films."

Recommended action : Download these two videos and submit them to the Board of Film Censors, as required by section 14 of the Films Act. See if it falls under the classification of a party political film (section 33) which criminalizes any film or video which contains biased references to any political matter or persons in Singapore.

Join the One Nation Under Films Act facebook group.

With election fever round the corner, the perfect inspirational song! With apologies to Mr Cameron Mackintosh!
Uploaded on youtube on February 20 by bagusjunction

This video was first posted on youtube by googivani under the original title "Hitler Slams Temasek". It has since been taken down from youtube due to a copyright claim by Lighthouse Pictures. Story here. A statement by googivani here. Enjoy it on LiveLeak while it lasts.
Posted by MIng at 6:24 PM 3 comments: