"All this censorship and so on makes no sense to me."- Minister Mentor Lee Kuan Yew, dialogue with Young PAP, Apr 21 2007 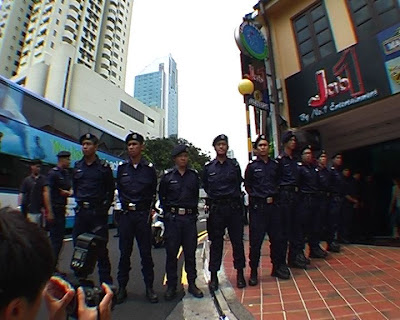 Speakers Cornered, a documentary on the standoff between local activists and police during the IMF-World Bank Meetings in Singapore last year, has been submitted to the Board of Film Censors this morning. The application is for the purpose of classification. (Receipt number : A/0712/1018000L)

My two previous films, Singapore Rebel and Zahari's 17 Years, are banned in Singapore under sections [33] and [35] of the Films Act respectively. Both sections were invoked for the first time in the nation's history.

The counter staff at BFC pointed out to me that the timeline for the approval for local productions tend to take longer than imported videos, and that the process can only be expedited once I submit another letter indicating public screening date(s), venue(s), target audience and purpose of exhibition. No concession is made if the applicant is the filmmaker himself. The same spiel was presented to me in January this year when I applied for a licence for Zahari's 17 Years. Then, I had not followed up with any letter. Still, the Ministry issued a public statement three months later to ban the film.

Now I hear you ask - Speakers Cornered has already been uploaded on youtube, so why bother submitting it to the censors now? Am I not asking for more trouble?

Answer : Not at all. On the contrary, I am only acting in accordance to the law as it currently stands.

Section [14] of the Films Act states that "every film in the possession of any person shall be submitted to the Board without any alteration or excision for the purpose of censorship at the owner's risk and expense and at such time and place as the Board may appoint." In other words, the possession of any film or video in Singapore is illegal unless they are approved by the authorities.

The good news is, according to MDA's website, not all videos in Singapore require certification. Exemptions are made for "educational videos, documentaries, programmes for children and pre-1966 movies".

But here's the bad news - such exemptions are not automatic. To qualify for an exemption, one has to make sure that the material do not flout a set of guidelines, and only thereafter can he make an application to the BFC, who will be the final arbiter of what should or should not be exempted. (See here)

Which then brings us back to square one: If you possess a film or video in Singapore, be it imported or self-made, you are required by law to submit the material to the censors for classification, certification or exemption. By default, that makes anyone who possesses an uncertified video culpable of violating the law (and you think I'm the only one guilty of breaching the Films Act?).

Therefore, as we approach a new year, I will attempt to shed my "Singapore Rebel" tag and make like a law-abiding Singaporean by submitting Speakers Cornered to the authorities for classification, as required by law.

At the same time, I wholeheartedly extend my goodwill to all the senior civil servants at the Ministry of Information, Communications and the Arts - by offering them this act of submission in order that they may use it to justify their salary hikes, and also provide an opportunity to make good on their pledge to get "creative."

How will they prohibit a video that's already on youtube? Under which section of the Films Act will they ban a video that essentially records an event in a manner no different from what broadcasters do all over the world? Will they target the filmmaker instead by subjecting him to another 15 months of police investigations? Or will they clear the video and consequently inspire a new wave of Singaporean political and activist cinema, including cause-related campaign videos such as this one? Or will they drag their feet until the newly-proposed media review committee submit their recommendations to the government?

While you hold your breath on this one, do drop by for updates, and have a great new year!

by Board of Film Censors

Videos declared for exemption should not violate any laws of Singapore. In addition, videos containing the following scenes /dialogues /themes are not exempted from censorship and should not be so declared.

Violence
Violence refers to acts of force resulting in pain, injury or death. The following portrayals are deemed as violent acts:
• Repeated hitting/punching/kicking;
• Multiple slashing/stabbing/shooting;
• Blood-letting/flowing/spurting;
• Amputation/decapitation/dismemberment; and
• Any other form of torturous and/or sadistic acts.

3. THEME
The overall theme of the subject of the video is deemed to be objectionable on moral, social, religious grounds or detrimental to national interest.

Moral
Examples of morally objectionable themes:
• Depiction of deviant sexual behaviour such as incest, and alternative lifestyles such as homosexuality and lesbianism;
• Promotion of free love, sexual promiscuity etc.

Social
Examples of objectionable themes on social grounds:
• Anti-social behaviour such as gangsterism, vandalism and hooliganism;
• Portrayal of the commission of crimes with details of the techniques used.

Religious and Racial
• Propagating of religion.
• Denigrating any race or religion.

Public Interest
Subject or topic that undermine the interests of public security, national defence and public confidence in the law and its enforcement.

Note: If in doubt of the video's content, you are advised to submit the video for censorship.

Latest : More arrested, including Anwar Ibrahim.
Posted by MIng at 10:50 AM 1 comment:

I made this video a year ago. It has since been screened in human rights festivals in Taiwan and Malaysia.

Seeing how Singapore's state censors, a.k.a. the Media Development Authority (MDA), is currently pitching itself as a government agency with some serious creative street cred, I may jolly well submit Speakers Cornered for a rating and a public screening license. Let's see how creative they can get by banning a work that's already circulating online.