There are two rules of law in China, one for the ordinary citizen and the other for 76 million members of the Communist Party. And the judges will do what they know what the leaders require to keep the country stable.
- Minister Mentor Lee Kuan Yew, interview with Charlie Rose, Oct 22 2009

He might as well be referring to his own country.


One Law For Her 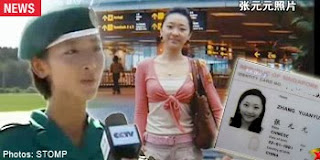 Permanent Resident Zhang Yuanyuan incurred the ire of Singaporeans when a video of her pledging full loyalty to China was uploaded on the web. Zhang was participating in a military parade to celebrate China's 60th year under the Communist Party. Singapore's Members of Parliament have since defended her publicly.

Former MPs Chia Thye Poh [right] and Lim Chin Siong were leaders of the opposition Barisan Sosialis when both were accused by Lee Kuan Yew of being members of the Communist United Front and detained without trial under the ISA. Chia spent 32 years in detention and is Singapore's longest-held political prisoner. Lim passed away in 1996. 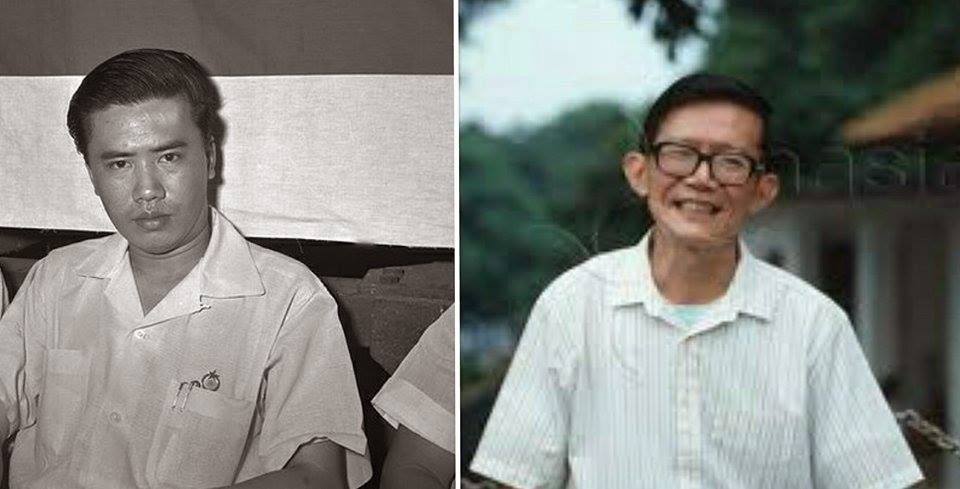 
One Law For Them 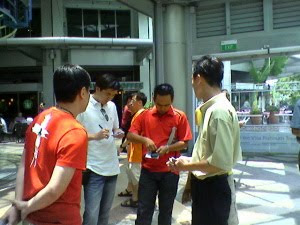 Police officers taking down the particulars of activists who had distributed flyers at Raffles City during the lead-up to the IMF-World Bank meetings in 2006. Three of whom are currently undergoing trial for participating in an illegal assembly.
Links here.

A flash mob organized in Raffles City as part of the Esplanade dance festival.

Email received from the press secretary to RAdm(NS)Lui Tuck Yew, Acting Minister for Information,Communications and the Arts.

We refer to your email dated 22 Sep 09 in which you asked for a review of the film, Zahari's 17 Years, which is prohibited under Section 35(1) of the Films Act.

On why the anti-Islam film Fitna was not gazetted, the reason is that the film was never submitted to the Board of Film Censors (BFC) for classification. It is not practical and realistic for the BFC to review films that have not been submitted to it.

Yoong Siew Wah, a former director of the Internal Security Department in the 1970s, has claimed on his blog Singapore Recalcitrant that his reputation has been tarnished by an inaccuracy in the book Men In White.

I reproduce Yoong's full post here. And is proceeded by an email reply from Francis Seow which I received in my mailbox at 3.32am Oct 11.

Occasionally, there can happen to an unsuspecting person an underbelly attack on his reputation from not entirely unexpected quarter.

Quite frankly, I am baffled by the motive of the ebullient authors of the overhyped political book "Men in White" in giving me unflattering mention in it. Whilst it is purported to give an objective history of the PAP struggle I wonder what have I got to do with the intra-party struggle. Anyway, in page 441 of the book the ambitious authors made the following unverified disparaging statement about me under the sub heading "Another Foreign Hand" : "But in 1971, after a police raid on his (Francis Seow's) woman friend's apartment, he used his influence and friendship with the then director of the Corrupt Practices Investigations Bureau, Yoong Siew Wah, to have the four officers who had conducted the raid sacked. The attorney-general Tan Boon Teik intervened to reinstate the four officers. Seow was allowed to resign rather than have his actions investigated because of his track record in the Legal Service. Yoong was also asked to quit."

On 28-9-09 I wrote to the Chief Executive Officer of the Singapore Press Holdings drawing his attention to this disparaging statement about me and requesting that a correction be made in his newspaper. I explained that the CPIB was duty-bound to investigate all formal complaints. Mr. Francis Seow made a formal complaint and CPIB carried out investigations of the four detectives. The investigation papers were sent to the Deputy Commissioner of Police who made the decision to dismiss the detectives. There was a prima facie case against the detectives. There was no question that I was asked to quit. I was appointed Director of Internal Security Department following my CPIB stint.

My letter was passed to Mr. Richard Lim, one of the three authors of the book. Mr. Lim replied on 1 October that the material for the disparaging statement was taken from a speech made by the then Prime Minister Lee Kuan Yew at the Select Committee Hearing of the Legal Profession (Amendment) Bill which was published in the Straits Times on 10 October 1986 of which a copy was attached.

It did not come as a surprise to me as the then PM Lee Kuan Yew was like a god to some people and the accuracy of his denigration of a person's reputation was invariably taken at its face value. That he made the disparaging statement about me in the heat of the moment without regard to its accuracy in his heated exchange with a cool-headed eloquent Francis Seow at the Select Committee Hearing could not be ruled out. He is not unknown to have behaved erratically with venom in his speech when highly agitated. He was obviously so infuriated by Mr. Francis Seow's biting taunts that it escaped his normally lucid mind that I was not boarded out but appointed Director ISD after my CPIB stint. It was subsequently pointed out to him but humility is not his forte and he has not been known as one to apologise for his mistakes. Mr. Richard Lim, one of the authors, has assured me that he would add a line after the sentence that I was also asked to quit to indicate that I was actually appointed Director ISD after my CPIB stint in his next and future editions of the book in order to be fair to me.

It was reported that the then attorney-general Mr. Tan Boon Teik intervened to have the four detectives reinstated. Very gallant of him. He must have read the CPIB file on the investigations and could not have missed that the dismissal of the four detectives was made by the Deputy Commissioner of Police. How the then PM Lee Kuan Yew was given the impression that I had the four detectives unlawfully dismissed is something I would like to get to the bottom of.

Mr. Francis Seow was the solicitor-general at the time when I was director CPIB. He had overall supervision of CPIB investigation files sent to his department for final direction. That I should have had a cordial relation with Mr. Francis Seow was natural in human relationship development. For the then PM Lee Kuan Yew or for that matter the attorney-general Mr. Tan Booin Teik to give a sinister connotation to such a relationship seemed to raise doubt as to the soundness of the detractors' mind. Why should the affinity between Mr. Francis Seow and me be seen as something unwholesome?

The most decent thing for the Minister Mentor Lee Kuan Yew to do now is to undo the harm he has caused me and to restore my reputation. But will he?

Thank you for the email. It sets out the facts fairly and accurately. One thing you seemed to have overlooked -- and that is, after the CPIB investigations, I believe the four police officers were the subject of disciplinary proceedings whose recommendations were made to the Deputy Commissioner of Police, who then took the disciplinary action(s) alleged.

If my memory serves me right, J.B. Jeyaretnam represented those police officers in the proceedings. And he later made representations to TBT, who used the opportunity to even out old scores. I, however, stray ....

Keep me informed if there are further developments.

P.S. What is Willie doing these days?