The art of violent metaphors - by Lee Kuan Yew 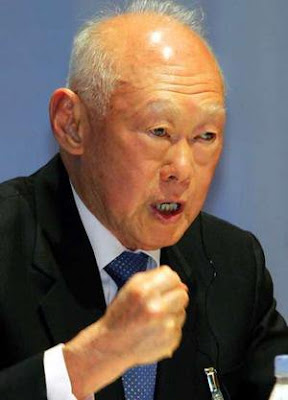 "Put it this way. As long as Jeyaretnam [Workers' Party leader] stands for what he stands for -- a thoroughly destructive force -- we will knock him. There are two ways of playing this. One, a you attack the policies; two, you attack the system. Jeyaretnam was attacking the system, he brought the Chief Justice into it. If I want to fix you, do I need the Chief Justice to fix you? Everybody knows that in my bag I have a hatchet, and a very sharp one. You take me on, I take my hatchet, we meet in the cul-de-sac. That's the way I had to survive in the past. That's the way the communists tackled me. He brought the Chief Justice into the political arena."
- SM Lee Kuan Yew, The Man & His Ideas, 1997


"Supposing Catherine Lim was writing about me and not the prime minister...She would not dare, right? Because my posture, my response has been such that nobody doubts that if you take me on, I will put on knuckle-dusters and catch you in a cul de sac...Anybody who decides to take me on needs to put on knuckle dusters. If you think you can hurt me more than I can hurt you, try. There is no other way you can govern a Chinese society."
- SM Lee Kuan Yew, The Man and His Ideas, 1997


In a speech at the Global Brand Forum on Monday, Senior Minister Lee Kuan Yew had said: "Pilots believe they are special, they got huge egos, I'm told. We are telling both management and unions - you play this game, there are going to be broken heads - let's stop it." - CNA, 3 Dec 2003


"If I have to shoot 200,000 students to save China from another 100 years of disorder, so be it."
- Minister Mentor Lee Kuan Yew evoking the ghost of Deng Xiaoping whilst endorsing the Tiananmen Square massacre, Straits Times, Aug 17, 2004


"Mine is a very matter-of-fact approach to the problem. If you can select a population and they're educated and they're properly brought up, then you don't have to use too much of the stick because they would already have been trained. It's like with dogs. You train it in a proper way from small. It will know that it's got to leave, go outside to pee and to defecate. No, we are not that kind of society. We had to train adult dogs who even today deliberately urinate in the lifts."
- Lee Kuan Yew on Singapore society, The Man & His Ideas, 1997

SINGAPORE — A Singaporean man who attacked the ruling party on Facebook and urge people to "burn" a cabinet minister has been arrested on charges of inciting violence, police said Wednesday.

In a statement, police said they had arrested a "man in his late 20s" on Tuesday "in connection with investigations into offences related to incitement of violence".

The statement did not name the man or give details of the offence, but said that he was released on bail pending further investigation.

Local media identified him as Abdul Malik Ghazali, 27, who posted a series of comments on the social networking site critical of how Singapore is hosting the inaugural Youth Olympic Games (YOG).

The August 14-26 event, held for competitors aged from 14 to 18, has generated limited public interest, with many events blighted by empty seats and the host country's athletes faring badly.

Vivian Balakrishnan, the minister for community development, youth and sports, has come under particular fire from online critics over the games.

Abdul Malik's postings on his own Facebook page and on a separate group account called "I hate the Youth Olympic Games Organising Committee" are also critical of Singapore's ruling People's Action Party (PAP).

Abdul Malik, who works for a company specialising in wood and flooring, said on his Facebook page that he was arrested "due to my involvement in anti-YOG and anti-PAP Facebook pages".

One of his postings highlighted recent floods in Singapore, the escape of detained terror suspect Mas Selamat Kastari, the amount of money spent to host the games and reports of the poor standard of food served for games volunteers.

He said it was time to "burn" the sports minister and the PAP.

"Rally together and vote them out!!!" he wrote.

Abdul Malik said in comments published Wednesday by The New Paper that "the comment is a metaphor".

"I did not intend for it to be taken literally. I did not mean for someone to actually burn," he said.

In another posting, Abdul Malik referred to a version of the communist anthem The Internationale on YouTube and wrote: "This song is a call to rise against tyranny and oppression... Very suited to what is happening now in Singapore."

Prosperous Singapore -- which is spending close to 300 million US dollars to host the games, more than three times original projections -- follows a hardline policy on political dissent.

Public protests are banned without a police permit and anti-government critics in the political opposition and media have been successfully sued for defamation by top officials.

Some in cyberspace rallied to Abdul Malik's defence.

"Police should get a grip and let loose. We are a democracy."
Posted by MIng at 7:55 PM No comments:

Videos : Pleading for death row prisoners at the Istana

Yong Vui Kong's Family Plead for his Life from Lianain Films on Vimeo.

2005 : Appeal to President outside Istana to spare the life of Shanmugam Murugesu

Appeal to President outside Istana to spare the life of Shanmugam Murugesu from Jacob George on Vimeo.

2005 : Public Forum on Death Penalty in Singapore and Appeal outside Istana for Shanmugam Murugesu

Public Forum on Death Penalty and Campaign for Shanmugam Murugesu from Jacob George on Vimeo.