Rebels of the Malaysian political tsunami 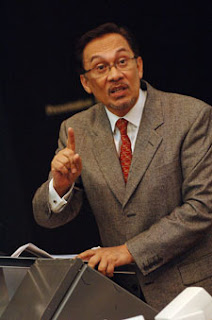 In 1974, Anwar Ibrahim, then 27 years old, was arrested and detained for 20 months under the ISA for leading student protests against rural poverty. In 1998, he was sacked from his post as Malaysia's Deputy Prime Minister. A week later, after he led a march to the Prime Minister Mahathir's residence demanding reformasi (economic and political reforms) and the PM's resignation, he was again detained under the ISA. In 1999, he was sentenced to six years in prison for corruption and in 2000 to another nine years in prison for alleged homosexual acts. Released in 2004, he is now the de-facto leader of the opposition in Malaysia.
http://www.anwaribrahim.com/

In 1969, Lim Kit Siang was detained for 18 months under the ISA. In 1979, he was convicted of five charges under Official Secrets Act. In 1987, Lim spent another 18 months in detention without trial under the infamous Operation Lalang. He is the leader of the opposition DAP and has retained his parliamentary seat in Ipoh Timur.
http://www.limkitsiang.com/ 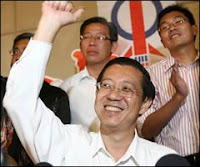 In 1987, a 26 year old Lim Guan Eng first tasted prison when he was arrested and detained without trial under Operation Lalang. In 1998, Lim was again imprisoned for 12 months after he was convicted under the Sedition Act and the Printing Presses and Publications Act. “When you are in jail, you lose all your humility. They want to suck you out completely but you must fight, persevere and come out stronger...I never imagine that I will be CM one day. This is a huge transformation for me - from a jailbird to CM,” Lim told reporters at his Chief Minister’s office in Komtar, Penang.
Lim: From ex-prisoner to Penang CM 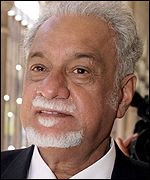 A leading opponent of the death penalty in Malaysia, Karpal Singh was detained in 1987 under Operation Lalang for close to two years. In 2000, while acting for Anwar Ibrahim, he was arrested and detained under the Sedition Act. He is the Chairman of DAP and retains his parliamentary seat in Bukit Gelugor, Penang.

Detained for 18 months under the ISA during 1987's Operation Lalang, Dr Nasir Hashim was briefly arrested earlier this year over the Bersih protest rally. He is the newly-elected assemblyman for Kota Damansara, Selangor.
Nasir: People's welfare above party ideology 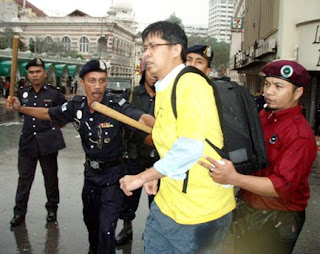 Detained for two years under the ISA in 2001, Tian Chua has been in and out of police lock-ups for an array of charges in recent months, including one for attempted murder. Last December, while on his way to the Parliament building to deliver a memorandum, police arrested him by dragging him out from his car. No such reception is likely to await him the next time, as he is now the newly-elected MP for Batu, Selangor.
tianchua.net

Human rights lawyer and activist M. Manoharan has been in detention under the ISA since October for leading an anti-government demonstration. From his jail cell in Kamunting, he contested the State assembly seat of Kota Alam Shah and beat the incumbent by a landslide margin. A statement from his wife says that "he is ready and waiting to serve and has started to draw up the agenda for Kota Alam Shah in the (prison) camp."
Posted by MIng at 4:51 PM 2 comments: 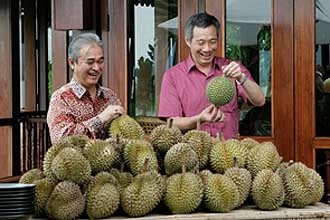 "If you already have a great orchestra, you can put a dummy there and you still got great music."
- Minister Mentor Lee Kuan Yew on good governance, CNA, March 5 2008

"How did it happen? We're not absolutely sure yet.. This was a lapse, what to do, it's happened.. As Minister Mentor says, we are not infallible."
- Prime Minister Lee Hsien Loong, ST, March 9 2008

If you haven't notice, both spoke as if the matter is already closed, with little regard that a terror suspect might still be on the loose. This blogger pretty much nailed it.

PM Lee also calls the 'escape' a "setback to our reputation" - exactly the same words I think MM had used in his 'conversation' with Wong Kan Seng before that public announcement at 8pm on 27th February. (Read below) 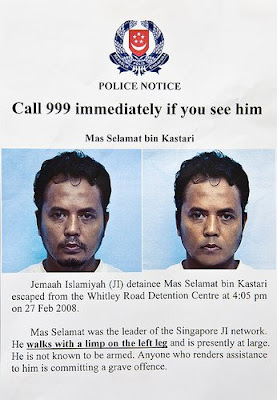 Here is the key to unlock the mystery of the greatest "jailbreak" in Singapore's history - the family of Mas Selamat. What were they told when they arrived at Whitley Detention Centre on the 27th February? Was it the first time that they were told that Mas was unable to meet them? Did the family threaten to go public about his supposed disappearance before the Government finally decided to make public the "escape" story? How are we to believe that Mas decided to take off just before he could see a family whom he brought with him to Indonesia while on the run there? Why hasn't anyone, including the international wire agencies, managed to contact the family members for comments?

Update : A topic entitled 'Mas Selamat Anak AWOL' has been posted on this forum.

What transpired in the last 7 days is not typical behaviour of a Government that summarily shot dead four hijackers on a SIA plane, mobilsed a riot squad to take on four silent protesters, threatened to shoot misbehaving protesters and deployed paramilitary troops, including armoured vehicles and helicopters, to watch over the IMF-World Bank meetings. If this was a real escape by an alleged leader of a terror organisation, the entire nation would be on high security alert, helicopters would be buzzing over our heads, reservist personnel on standby duty, suspected safe houses broken into and increased police presence all around. It would be an opportune time, given a heightened sense of fear, for the Prime Minister to score massive political points by making stout assurances and rallying the nation behind him.

But alas, this is not a security crisis, but a costly cover-up for a ghastly blunder. There is no evidence of a getaway, absolutely no leads and Wong Kan Seng would still have us believe that Mas acted alone and that he is still in Singapore.

The facts are getting murkier by the day. Lee Hsien Loong does not want to get his hands dirty in a stinking pot that may boil over. It is better, therefore, to send out wild goose chases, involving Interpol and regional police force, than anger the World Muslim Community by announcing that a brother had died while under custody in Singapore. It is Lee Kuan Yew- style pragmatism in full swing here. Any wonder that at a time like this, the MM is in Saudi Arabia waxing lyrical about making music? And no one dared to ask him about the great "escape"? How convenient.

A probable conversation sometime between 4pm to 8pm on 27th February 2008.

Wong Kan Seng : Sir, detainee Mas Selamat bin Kastari has died. The family is here waiting to meet him. Shall I tell them?

WKS : But sir, the wife is getting impatient, even threatening to go to town about not being able to see her husband.

LKY : I am going to Saudi Arabia. I am not going to announce to the Arabs that a Muslim detainee has died in my custody, on my watch. This is unacceptable.

LKY : Come on Wong, think! An underground passage, a hole in the toilet, whatever! Just get it done for now.

WKS : But sir, this would be a major blow to our reputation.

LKY : Let's weigh the options. Do we suffer a setback in reputation, which given time we can repair, or do we permanently cast a lingering doubt on the minds of Muslims all over the world that a Muslim detainee has died in our custody?

WKS : But sir, we can say there is no foul play. We can call it malaria, heart attack, suicide or ...

LKY : Not everyone will believe us, Wong. All it takes is to plant the seeds of doubt in the minds of a few Jihadists and we are in trouble forever. I'm willing to sacrifice a setback in our reputation but not put our national security at permanent risk by announcing that Mas Selamat has died, in whatever circumstances, under my custody.

LKY : Look, make a short and terse statement tonight. Don't give anything away. I'm leaving for Saudi in two days. Meanwhile, tell the press to lay off questions about the hows and the whys. Tell Loong not to make any rash statements until I get back. And yes, appoint three of your most trusted men to investigate. Call it an "independent commission". Get the CID on it as well. Don't publicise any findings until I've fine combed through the report. The other ministers must not know. Let them think and act as if Mas has really escaped. We should keep a semblance of a manhunt but let's not waste too much resources on this. Try to minimise international involvement too.

WKS : Yes, we did. Within 24 hours, on consecrated ground. 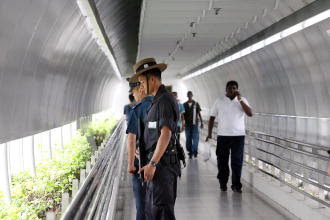 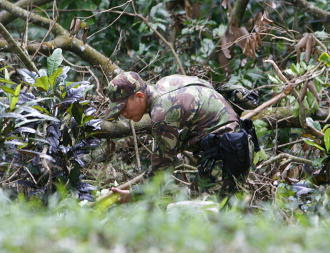 A Gurkha clears undergrowth as he enters a forested area, searching for Mas Selamat. -- PHOTO: REUTERS 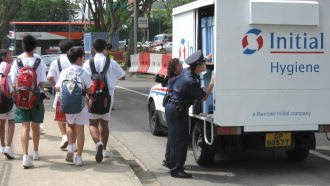