Hundreds of defiant Singaporeans protesting censorship gathered in Malaysia on Friday to see a documentary banned by regulators in their home country as a threat to national security.

The film, "To Singapore, with Love", examines the case of political exiles in the city-state and features interviews with nine former activists, student leaders, and self-confessed communists who fled Singapore from the 1960s until the 1980s and are currently settled in Malaysia, Britain and Thailand.

Organisers estimated 400 people watched the screening, saying most of the audience was made up of Singaporeans who had crossed the border to view the production in the southern Malaysian city of Johor Bharu.

The Media Development Authority (MDA), Singapore's media regulator, on September 10 banned the documentary, saying it provided a "distorted and untruthful" account of the exiles' situation.

It said the film's contents undermined national security because it showed "legitimate actions of the security agencies to protect the national security and stability of Singapore are presented in a distorted way as acts that victimised innocent individuals".

According to the Singapore government, a number of the exiles featured in the film were former members of the Communist Party of Malaya, which had sought to overthrow governments in Singapore and Malaysia in the 1950s and 1960s.

Singapore became independent from the Malaysian federation in 1965.

"I am disappointed by the reaction of the MDA, I wish it was otherwise of course...I spent a lot of time making it and really would have liked this film to have been seen (in Singapore)," director Tan Pin Pin told the audience in remarks after the screening.

Tan added that she was weighing her options, including launching an appeal and holding "private screenings".

The production has been screened at film festivals in Germany, Dubai, South Korea and the United States, and will be shown at the SEA ArtsFest in London in October.

Singaporeans at the Malaysia screening, part of a "Freedom Filmfest", said the relatively large turnout by their compatriots despite the hassle of having to travel to Malaysia, signified indignance in the city-state over the film's censorship.

"The interest is evident in the number of people here, over 400 who turned up in Johor Bharu on a weekday afternoon," said 24-year-old university student Lim Jialiang.

"After watching the film now, it is difficult for me to imagine why the film had to be banned," he added.

The 70-minute documentary drew loud applause from the audience at the end of the screening.

The exiles featured in the film -- all aged 60 or older -- gave vivid details of how they left Singapore and of their current lives, with most expressing a longing to return home permanently.

Singapore, ruled by the same party since 1959, has relaxed strict social controls including media censorship in recent years, but continues to impose stringent regulations on films that discuss local politics. 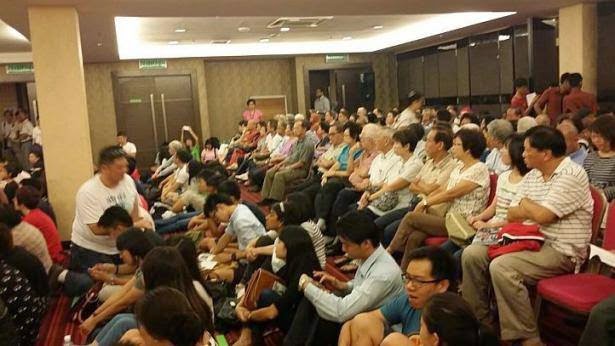 Yale-NUS shelves plan to screen To Singapore, With Love

Tan to Yale-NUS: You may not screen banned film

Have you heard about the film Singapore has banned its people from watching? Well, you have now

History's many shades of grey

S’poreans travel to JB for movie of the year

I Went to Malaysia to Watch A Film Made In Singapore About Singapore’s Political Exiles Because The Film Isn’t Allowed Be Publicly Screened in Singapore. I know right? Whoa.

To Singapore, with Love 星国恋

Counterproductive to ban public screening of “To Singapore, With Love”
Posted by MIng at 11:42 AM No comments:

20 films that undermine the national security of Singapore 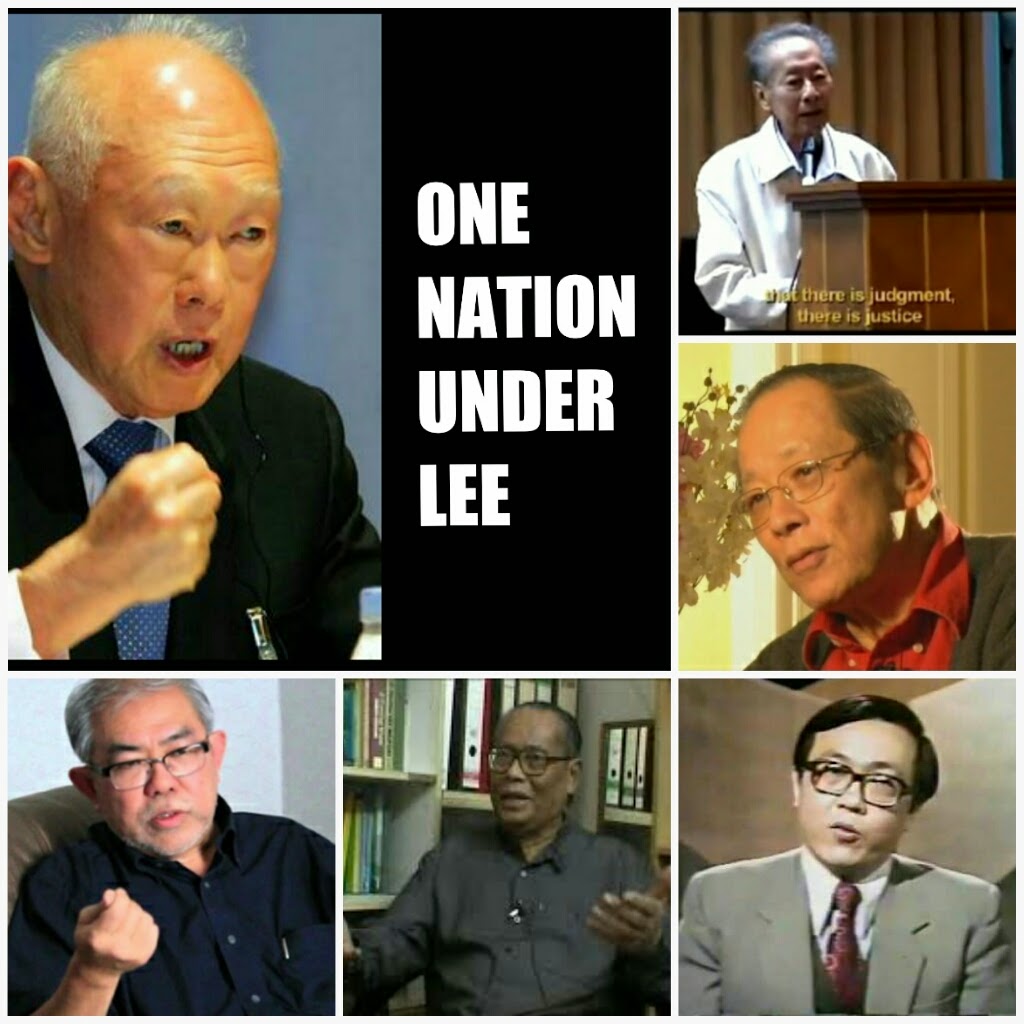 In banning the documentary 'To Singapore, With Love', the government reasoned that the film "undermines national security because legitimate actions of the security agencies to protect the national security and stability of Singapore are presented in a distorted way as acts that victimised innocent individuals".

Here are 19 other films that fit the above description of undermining the national security of Singapore.

10. The Price of Freedom in Singapore -

19. Lies of the "Marxist Conspiracy"

Top 100 Political Videos (that are likely to be banned in Singapore)
http://singaporerebel.blogspot.sg/2008/08/top-100-political-videos-that-are.html?m=1
Posted by MIng at 1:19 PM No comments:

Singapore bans film on political exiles 'To Singapore With Love'

The film "To Singapore, with Love", directed by Singaporean director Tan Pin Pin, features interviews with the former activists and student leaders who fled Singapore from the 1960s until the 1980s and are currently settled in countries including Britain and Thailand.

The 70-minute documentary was released in December last year and has been screened at film festivals in Germany, Dubai, South Korea and the United States. Singapore's Media Development Authority (MDA) said in a statement it had "assessed that the contents of the film undermine national security because legitimate actions of the security agencies to protect the national security and stability of Singapore are presented in a distorted way as acts that victimised innocent individuals".

It said a number of the exiles were former members of the Communist Party of Malaya (CPM) which had sought to overthrow governments in Singapore and Malaysia in the 1950s and 1960s. "The individuals in the film have given distorted and untruthful accounts of how they came to leave Singapore and remain outside Singapore," the media regulator added.

MDA said the individuals were not denied the right to return to Singapore or forced to leave the city-state, as was portrayed in the movie. "The government has made it clear that it would allow former CPM members to return to Singapore if they agree to be interviewed by the authorities on their past activities to resolve their cases," it said. 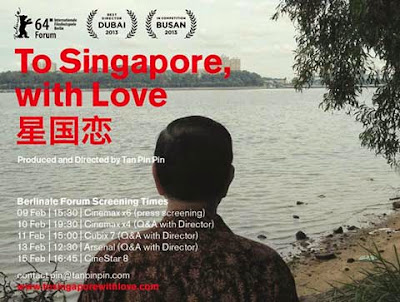 A description posted on the film's official website said the documentary explores how the exiles "lived their lives away and how they still view the Singapore of their dreams". "They are now in their 60s to 80s. Some were activists, student leaders, others were card carrying communists," it said.

Tan, the film's director, said she was "very disappointed that my film is banned".

"By doing this, MDA is taking away an opportunity for us Singaporeans to see it and have a conversation about it and our past," she said in a Facebook post. "We need to be trusted to be able find the answers about ourselves, for ourselves," she added.

But Singapore's information minister Yaacob Ibrahim said he supported the media regulator's decision. "Individuals who have chosen to leave and remain outside Singapore, and refused to account for their past actions, should not enjoy a public platform to purvey distorted and untruthful accounts to mislead the public, absolve themselves or deny their past actions," he said in a statement on Facebook.

Malaysia gained independence in 1957 and Singapore in 1965, both from Britain, after brief periods of self-rule. The Southeast Asian city-state famous for strict social controls has relaxed censorship rules in recent years, but maintains strict regulations on films that discuss local politics.

In 2010, the government ordered Singaporean filmmaker Martyn See to take down a YouTube video of a rare public talk by Lim Hock Siew, a doctor and activist held from 1963 to 1982 during then prime minister Lee Kuan Yew's rule.

In 2007, it banned a film by See on another political detainee, Said Zahari, a journalist. Zahari and Lim were among more than 100 people alleged to be communists by Lee's government and rounded up in the early 1960s. 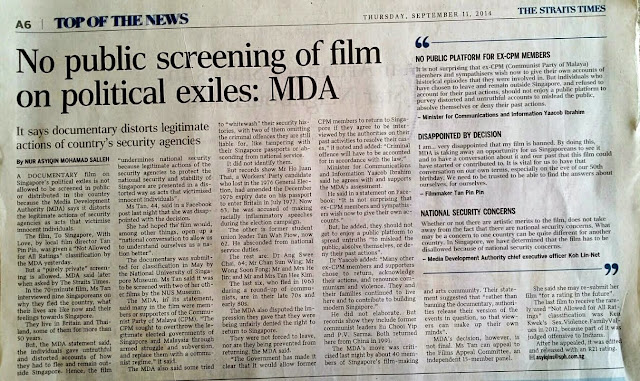 Singapore’s banned film on exiles to be screened in Malaysia
http://www.themalaymailonline.com/malaysia/article/singapores-banned-film-on-exiles-to-be-screened-in-malaysia 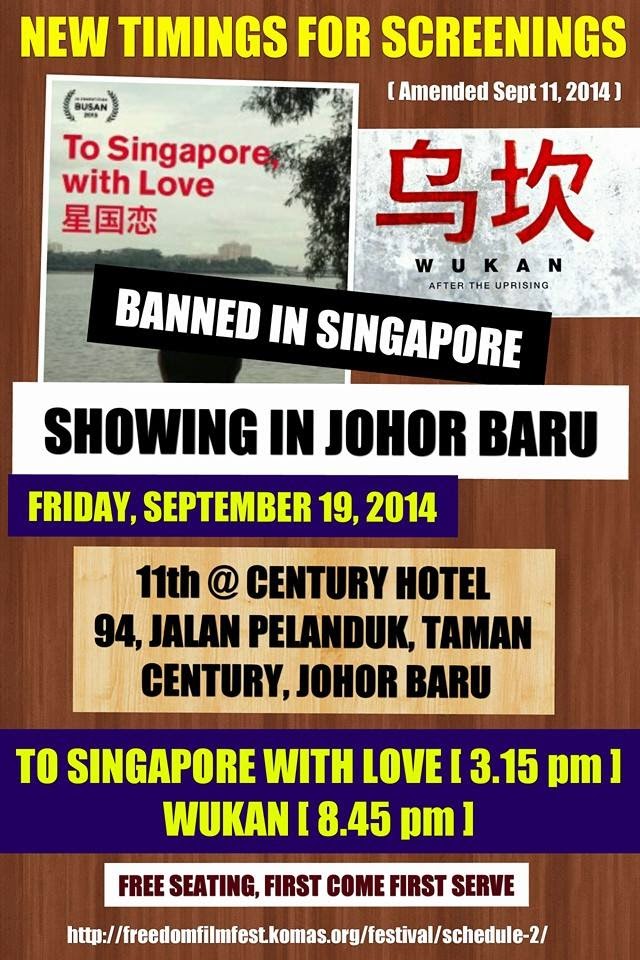 No screening for documentary due to MDA’s delay
http://www.theonlinecitizen.com/2014/04/no-screening-for-documentary-due-to-mdas-delay/

Tan Pin Pin's film To Singapore, With Love not to be shown in public
‘To Singapore, With Love’ documentary screenings banned by MDA
Film About Exiles Is Banned in Singapore
‘To Singapore With Love’ banned in its home country
Statement by civil society on MDA’s decision to ban local film, “To Singapore, with love”
Singapore artists urge overturn of documentary ban
Ban on film contrary to what SG50 promised
Don’t tell us what is true, let us judge by opening official records
MDA, Let the People Judge
Film on exiles – MDA explains what “purely private” means
Posted by MIng at 11:47 AM No comments: