Below is a summary of a list compiled here by Ng Yi-Sheng. As Ng himself noted, it is by no means exhaustive, as many cases of censorship in Singapore often get swept under the rug as artists fear more repercussions (such as withdrawal of State funding) should they blow the whistle.

See also : A Chronology of Authoritarian Rule in Singapore. 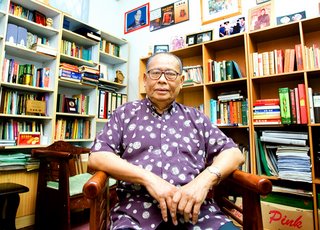 Said Zahari, a former leftist activist, sits in front of his library at his home in Kuala Lumpur.
PHOTO: AP


Dear Censors, MDA and the Information Minister (whoever you may be by the time when you read this),

If Zahari's 17 Years was allowed to be screened, it would have attracted no more than an audience of 50 people crammed into some obscure arts venue. Yes, for a while, it may generate a little buzz, perhaps some debate in history classrooms. But ultimately, interest will wane, and it will end up collecting dust in the archives, and then unearthed ten years later by some researcher for his academic thesis.

Don't shoot me or Pak Said Zahari if Singapore's reputation takes a beating over your banning of my film. You know where to point the muzzle.

With love by your true Singaporean,
See Tong Ming, Martyn

by Reporters Without Borders

A “worthy” successor to his father, Prime Minister Lee Hsien Loong has done nothing to loosen state control over the media. Journalists have a great deal more freedom to cover international news than local affairs. And a political documentary was hit by censorship.

The authorities continued their trial of strength with the magazine the Far Eastern Economic Review (FEER), which has been banned from distribution in the country since 2006, but which is still available online. A court in June rejected a request from the prominent Hong Kong-based monthly to be defended by a British lawyer in a “defamation” trial opened against it last year by Lee Hsien Loong and his father. The judge considered that the suit was not sufficiently “complex” for the lawyer in question. Lee Hsien Loong and his father Lee Kuan Yew took exception to an article in the FEER about opposition leader Chee Soon Juan, whom it termed a “martyr of the country” because of a raft of legal proceedings he has had to face.

The opposition, particularly the Singapore Democratic Party (SDP), bête noire of the regime, is rarely quoted in the media and dissident voices have to resort to using the Internet to express themselves.

The authorities in April declared a sentence of up to two years in jail and a heavy fine would be imposed on anyone suspected of possessing or broadcasting a copy of the documentary “Zahari’s 17 years”, about the 17-year imprisonment of journalist and opposition figure Said Zahari. The film-maker, Martyn See, was forced to hand over the original and copies of the documentary to the ministry of information communications and the arts. In the film, the former editor of the newspaper Utusan Melayu recounts why the government of the time, headed by the father of the current premier, arrested him in 1963 along with several of his associates, under a draconian internal security law. The ministry said “Zahari’s 17 years” threatened “public confidence in the government”. Martyn See’s films can be viewed on the Internet.

A correspondent for Reuters in Singapore, Mia Shanley was forced to reveal the source for one of her stories after two companies took action against the British news agency and the newspapers The Straits Times and The Business Times to force them to reveal the sources for articles dating back to November 2006. The courts systematically returned verdicts in favour of companies, undermining the protection of sources in the country.

Nation Builders (above) has been disqualified as an entry to the Singapore International Film Festival Short Film Competition as it has failed to meet its entry requirements.

Festival staff Yuni Hadi told me over the phone that since the film has been circulating on the net, it no longer qualifies as a World Premiere, as stated here in its rules and regulations.

4. Entries must be World premieres and must not have been howsoever broadcasted, screened or participated in any competition/festival in Singapore or abroad

(Silly me, but I swear I read it differently two months ago)

The 14 minute film was uploaded on the net on the eve of National Day and subsequently submitted as an entry to SIFF in December 2007. It has not been publicly screened to an audience here or abroad. The disqualification means that the film will not be submitted to the Board of Film Censors.

This is my 3rd submission to the SIFF. The first, Singapore Rebel, was banned in tandem with a 15 month-long police investigation. The second, Zahari's 17 Years, was inexplicably withdrawn by the SIFF and subsequently banned a year later when I personally submit it for an exhibition licence.

Meanwhile, SIFF is screening a Singaporean-made film about the homeless entitled Homeless FC. It is directed by Lynn and James, who made the East Timor redemption flick Passabe. Needless to say, Homeless FC isn't about the destitutes in Singapore, but in Hong Kong.
Posted by MIng at 11:57 PM 4 comments: