Video : The Price of Freedom in Singapore

"I believe, with history as our guide, our people will be free one day," says political exile Francis Khoo is this rare clip from the BBC made presumably in the late 70s.


For the record, the following:

The local journalist mentioned at the start of the clip was probably Ho Kwon Ping.

A memorial for Francis Khoo was held in Singapore last week. In attendance was his wife Dr Ang Swee Chai, whom the Government gave permission to re-enter the country after 35 years in exile with her husband. Dr Ang also gave two public talks at SGH and NUH before she left for Britain on Sunday.

The Vanda Miss Joaquim was selected as Singapore's national flower in 1981, after the broadcast of this clip. 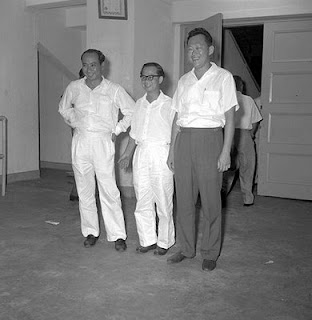 Dr. Toh was an anti-colonial student in his London days at the Malayan Forum.  Upon his return to the University of Malaya as a lecturer in physiology, he was one of a handful of anti-colonial members of the academic staff.  Because he came to know John Eber in London, John wired through him a cable to the University Socialist Club (USC) offering the free legal service of D. N. Pritt, Q.C. for the defence of the Fajar Sedition Trial.

When David Marshall was in London for the first constitutional talk, he pushed on the question of independence for Singapore.  As a result, the talks floundered in the face of British reluctance.  Some members of the USC approached Dr. Toh, then chairman of the PAP, to issue a press statement in support of David Marshall’s stand. He very willingly and happily agreed. We appreciate his anti-colonial stand and his genuine show of solidarity.

Many have lauded him as a politician with democratic principles and courage to match. Some have even praised him for fighting against “elitism” and cited it as the reason for his fall from grace.

However we should examine his political life in more detail.

Was he a politician who consistently upheld democratic principles?  His subsequent actions do not substantiate this claim.  In mid 1961, on the eve of the Anson by-election, six unionists of the left wing of the PAP issued a press release calling for the PAP leadership to end arbitrary arrests and release all detainees, lift all restrictions on the freedom and rights of the people, as well as put an end to the obstruction placed in the way of trade union unification.  The press release further invited the PAP leadership to grant the right of citizenship and franchise to all those loyal to the anti-colonial struggle and allow freedom of the press, speech, assembly and organization.  In brief, the statement called for the repeal of the draconian, totally undemocratic laws under the PPSO (today renamed the ISA).

What was Dr. Toh’s “democratic” response?  This is history.  His anti-colonial sentiment evaporated into thin air.  He sided with our colonial masters.

“I asked him (LKY), therefore, what he proposed to do about the six’s statement, and whether they would be allowed to speak on the PAP platform at Anson.  To this he replied, rather surprisingly that the moment might well have come to break with Lim and Co.  I said that we had always been very chary about advising him to break with what was probably the strongest political force in Singapore.”

It can thus be surmised that the initiative for the breech with the left was with LKY.  The left wing was kicked out.  The left did not leave on its own volition as claimed by many.  The issue here is whether Dr. Toh Chin Chye, as the chairman of the party, could be without knowledge and responsibility?

Merger thus became the key issue.  What was Dr. Toh’s stand?  He was wholeheartedly for merger.  When Barisan Sosialis wanted the issue of our future debated and clarified in the Legislative Assembly, Dr. Toh as speaker suspended the Assembly indefinitely and was proud of his action.  Why did he deny the people of Singapore the right to know their future that is embodied in the terms of the merger?  Was it because the chairman of the PAP was, as he admitted in his interview with Melanie Chew (see “Leaders of Singapore”) that he was “in the dark” as to the terms of merger?

On the PAP referendum of merger, he was happy to bluff and confuse the people of Singapore.  He admitted he could not understand the referendum drawn up by Lee Kuan Yew.  It was phony, but he was prepared to bamboozle his countrymen.  Think again, what sort of a man is that.

Suitability Certificate.  When the PAP with Dr. Toh as chairman introduced the suitability certificate, i.e., the security vetting of a student and his/her family’s background as a prerequisite for admission to the University of Singapore, the then Vice-Chancellor Dr. B.R. Sreenivasan had objected strenuously contending that the university would conduct no political vetting and students would be admitted on merit.  As a consequence, funds were withheld from the university and Dr. B.R. Sreenivasan, well regarded by academics around the world, was forced to resign.  In walked Dr. Toh Chin Chye, the PAP chairman, to take his place and implement the suitability certificate.  That speaks loudly of the type of “democratic” values he possessed.

Dr. Toh Chin Chye’s fight against “elitism”?  If there were ever a fight, it was not obvious.  At that time Lee Kuan Yew had wanted to put his hand-picked professionals and ex-civil servants as PAP Assembly members.  There was an understandable unhappiness among the PAP branch grass-root members, some with ambitions to become assemblypersons.  It was generally known that a small group, including Dr. Toh, Ong Pang Boon and Wee Toon Boon, was not in favour of this policy but they went no further, taking no steps to challenge LKY.  Nevertheless, LKY brood no dissent, and they were all dropped unceremoniously like hot potatoes. 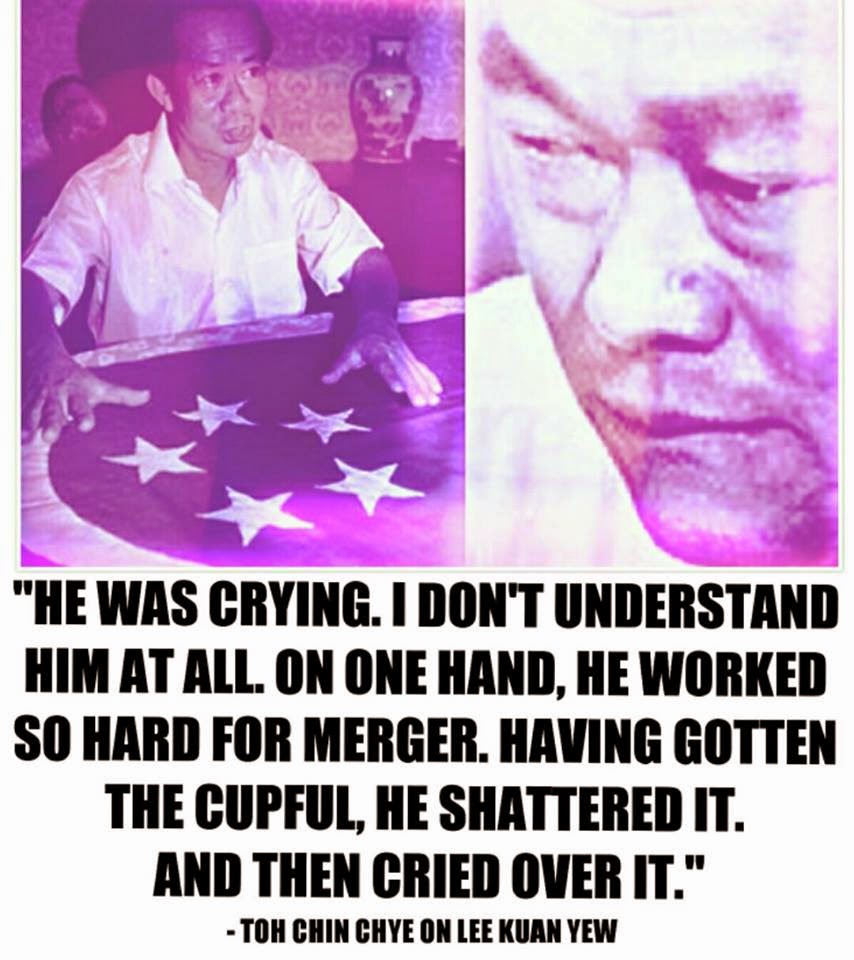 "He was crying. I don't understand him at all." - Toh Chin Chye on Lee Kuan Yew

Excerpt of an interview with Dr Toh Chin Chye, published in 'Leaders of Singapore' by Melanie Chew, 1996 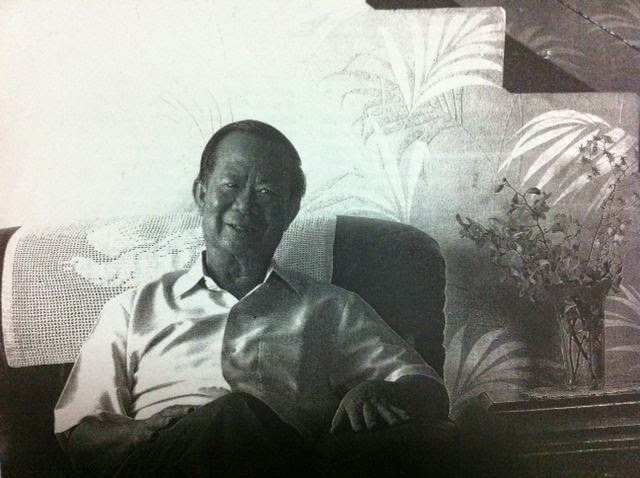 I remember that morning very clearly. In the morning, I wrote a letter to Tengku. He promptly replied in the afternoon.

I stayed behind (in Kuala Lumpur) and Lee came back to announce to the public in Singapore that Singapore had become independent. I stayed behind to clear up the mess. The Malaysian Parliament was meeting the next day. Lee Kuan Yew told me to go to the Parliament. Can you imagine the uproar? I had no chance to face the members of the Malaysian Solidarity Convention to break the news. Their support for Singapore came to nothing.

When Lee Kuan Yew got back to Singapore, he invited the members of the Convention to attend his press conference. He was crying. I don't understand him at all. On one hand, he worked so hard for merger. Having gotten the cupful, he shattered it. And then cried over it.

He held two successive press conferences, and in which both he cried. On the third morning I went to work, and saw the press boys again. I asked Lee Wei Ching, his press secretary, "Why are they hanging around here?" Another press conference! I told Lee Wei Ching, "You ought to tell the Prime Minister to go to Changi and take a rest. Call the press conference off! Another crying bout, and the people of Singapore will think the government is on its knees. So he went to Changi, staying at the government bungalow for six weeks.

One smart reporter noted this by going through Hansard. There was a big time gap in Hansard between our last parliamentary meeting and the next meeting. More than five months. One would have thought with such a big event, Parliament should be immediately summoned and the announcement made to Parliament. The opposition came at me. Why is there no Parliament sitting? So I had to hold the fort.

I was not appointed to act for him while he was away. When he went off to Changi, Parliament did not meet. So Singapore had a Parliament in suspended animation. Keng Swee and Lim Kim San saw me and asked me what was the constitutional position. Has he recovered? What if he does not recover? So what happens? I said I thought he was getting better, although I could not see him and telephone calls were not put through.

Q: So after the separation, you did not have Parliamentary meetings until December?

Parliament last met on June 16th, 1965 when Singapore was still in Malaysia, and recommenced only on December 8th, 1965 after we had left Malaysia.

Your point is taken. In a crisis there will be public spirited figures who will rise to the occasion, for better or worse.

Q: Mr Lee at that time was in a very emotional state?

Yes, he was. I knew he was. And was very worried for him. That is why I told Lee Wei Ching to call the press conference off.

Q: Was he in a very emotional state because he felt he had made a blunder?

You have to interview him on that. I cannot answer for him.

Q: Could his provocative speeches have been part of a deliberate strategy?

I do not know why he did that. But he was influenced by Alex Josey, who came from the Middle East where he had been a reporter. Josey fed him ideas about the Muslims. The "Mad Mullahs." The "Ultras." Lee used the term, "Mad Mullahs." This was Alex Josey's phrase. Alex Josey was his close friend, golfing friend and biographer.

Q: Lee Kuan Yew asked the Tengku to write to you to explain that it was Tengku's decision to separate.

Yes, I think that was the purpose. To tell me that it was a decision made by the Tengku.

Q: Was it because he was afraid?

So the blame would be on the Tengku's shoulder. Not on our shoulders. The Tengku was far sighted. However desirable it was to continue as one country, we could not do so. He wrote, "We cannot avoid a bloodshed if we remain."

Tengku had been in charge of multi racial Malaya since 1957. He knew, better than any of us, what was possible and impossible. The 1969 riots in Kuala Lumpur proved him right."
Posted by MIng at 5:39 AM No comments: