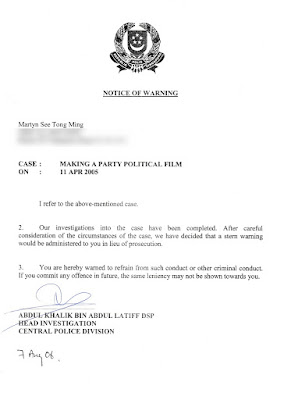 After 16 months of investigation, three interrogation sessions, 120 questions, and not discounting a covert round of interviews with some friends and associates, the police has finally decided to close their case against me.

It all ended under 10 minutes at noon today at the Cantonment Police Complex. Seated at the interview room where I had expected yet another round of questioning, I was instead informed by Assistant Superintendent Chan Peng Kuang that upon the conclusion of their investigation, the police has decided to issue a warning in lieu of a prosecution. The camera, seized in August last year, will be returned to me. The tapes, however, will remain in police custody unless I should make a formal claim. After two minutes of wrangling a deal, which included my suggestion that the police donate the footages to the National Archives, I decided not to make a claim for the tapes, considering that it would be subjected to an undertaking whereby should any of the footages be distributed, I would be called in for investigation once more. The police now reserves the right to destroy the tapes, as they do, I suppose, for seized pornographic material.

I was then ushered to a "warning" room where another officer arrived to read out the warning letter. I stood like a schoolboy in front of the principal's desk, only that the officer's delivery was more perfunctory than stern.

This whole episode has been rather surreal, but no less worrying (I still haven't told my mother about it). It would have been out-of-whack in any First World nation, but it actually did happened in modern-day Singapore - the production of one short video featuring an opposition figure sparked off a ban, a police inquiry and much undue publicity for everyone involved. If the censors had cleared the film, it would have been screened to an audience of no more than 80 people, and not all of them would be interested or much less impressed with its content. It would have died a natural death not long afterwards. But by banning it and subjecting its filmmaker to police investigations, the Media Development Authority has created a publicity monster for themselves, precipitating a seemingly amenable remark from the Minister Mentor himself.

And it gets even more surreal, if one considers the fact that amid all the questioning from the police, I still haven't been told exactly how 'Singapore Rebel' had breached the Films Act.

Where do I go from here? I've obviously crossed the OB (out-of-bounds) markers of expression in Singapore. As much as I like to find my way back to stay within its limits, it's mightily difficult when these boundaries, already amorphous as they are, are constantly shifting back and forth, catching off-guard just about anybody with an opinion deemed contrary to "national interest."

And may all the wishes of anyone who had generated a single moment of kind thought toward this whole saga be fulfilled.

A Happy 41st Birthday to Singapore.

Dissent is not disloyalty.


A summary of the Singapore Rebel saga

March 11 2005 - Martyn See withdraws video after a warning by Film Festival director Lesley Ho that the censors has deemed the film to be "objectionable" under the Films Act. An email a week later from Ho noted that the authorities will consider the "matter dropped" if film is withdrawn.

April 11 2005 : The Media Development Authority lodges a police report against Martyn See. (This was first made known to See in the police interview on March 16)

May 16 2005 : First police interview at the Cantonment Police Complex.

August 29 2005 : Camera and all tapes relating to the production of 'Singapore Rebel' are surrendered to the police.

Sept 20 2005 : Filmmaker Tan Pin Pin and blogger Jacob George is called in for questioning by the police over their association with Martyn See. Two other associates of See were also called up during this period.

Oct 15 2005 : In response to a letter in the Straits Times asking if a recently-aired TV series profiling PAP ministers had contravened the Films Act, a spokeswoman from the ministry replied that "the series clearly did not breach the Films Act as the discussions were conducted in a non-partisan manner and were aired by MediaCorp for the purpose of reporting current affairs."

Dec 6 2005 : When asked by Time magazine on the ban on 'Singapore Rebel', Minister Mentor Lee Kuan Yew was quoted in saying,"Well, if you had asked me, I would have said, to hell with it. But the censor, the enforcer, he will continue until he is told the law has changed. And it will change."

Apr 13 2006 : 'Zahari's 17 Years' is passed by censors but film festival cancels screening. It has not been publicly shown locally or abroad.

SINGAPORE, Aug 7 (Reuters) - The Singapore police said on Monday it had issued a warning to a local film director who made a documentary about an opposition politician, but decided not to prosecute him, bringing a year-long investigation to a close.

While Singapore has been trying to encourage a homegrown film and media industry, the city-state's Films Act bars the making and distribution of "party political films" -- an offence punishable with a maximum fine of S$100,000 ($63,690) or up to two years in prison.

Martyn See, 37, whose film about the Singapore Democratic Party's leader Chee Soon Juan was rejected by a local film festival last year, has been questioned by police several times since May 2005.

In the notice sent to See and seen by Reuters, police told See to refrain from "such conduct or other criminal conduct" adding that the "same leniency" may not be shown in future.

"The police said they have decided to let me off with a warning and told me not to do it again. But until today, I have not been told why the video was deemed as a party political film," See told Reuters.

See's 26-minute film, "Singapore Rebel", chronicled Chee's civil disobedience campaign and showed footage of his arrest for speaking in public without a permit.

Under Singapore law, local films that "contain wholly or partly either partisan or biased references to or comments on any political matter" are banned, according to the Films Act.

Singapore is frequently criticised by human rights groups for its restrictions on the opposition and media.

A public gathering of more than four people requires a police permit. Several opposition politicians have been sued by the country's leaders for defamation.

The government says such action is necessary to maintain law and order.
Posted by MIng at 8:00 PM 13 comments: