More blasts from the past. In June 1959, jukeboxes and pin-tables got onto the nerves of the newly elected PAP Government headed by Lee Kuan Yew, Singapore's first Prime Minister. 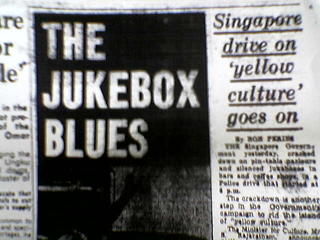 The Singapore Government yesterday cracked down on pin-table parlours and silenced jukeboxes in bars and coffee shops, in a Police drive that started at 6 p.m.

The crackdowm is another step in the Government's campaign to rid of the island of "yellow culture."

The Minister for Culture, Mr S. Rajaratnam, announced earlier in the week that rock n' roll and sentimental music would be drastically reduced in Radio Singapore broadcasts.

The Government has also ordered cinema exhibitors to withdraw from screening about 30 films and to send some back for re-examination by the censor.

The films came from America, Japan and Hong Kong.

It is understood that these films, in part, showed excessive brutality or were of a low moral tone.

The film censor, Mrs Cynthia Koek, however, would not comment.

Groups of Police officers, detectives and constables, acting on the instructions of the Government fanned out at 6 p.m. from all Police divisional stations to proclaim the big ban.

Armed with sheafs of documents authorising the ban, Policemen moved into hundreds of pintable arcades, bars and coffee shops.

After informing the proprietors of these establishments, they slapped the notices announcing the cancellation of their licences to operate the machines.

By 8 p.m., the saloons were deserted and the jukeboxes in bars and coffee shops blared no more.

A Standard reporter, who toured the island at 7 p.m. found several saloons in the Chinatown and Jalan Besar areas had closed down voluntarily - after getting wind of the impending swoop.

Unlicensed gaming shacks, which had mushroomed all over the island quietly shut their doors when messages were realyed through underworld agents.

This is an eye-witness account of the swoop: At 6 p.m., Police Officers moved in silently into saloons, bars and coffee shops and explained the ban to teh shocked proprietors.

They were warned that any breach of the ban would lead to a fine.

Notices were then pasted or nailed on the walls of the premises and above jukeboxes.

The proprietors asked their customers to leave and then shut their doors immediately. 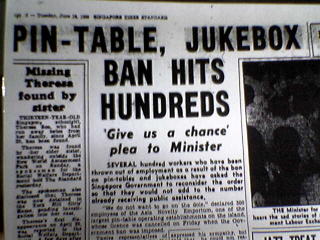 Several hundred workers who have been thrown out of employment as a result of the ban on pin-tables amd jukeboxes have asked the Singapore Government to reconsider the order so that they would not add to the number receiving public assistance.

"We do not want to go on the dole," declared 300 employees of the Asia Novelty Emporium, one of the largest pin-table operating establishments on the island, whose licence was cancelled on Friday when the Government ban was imposed.

Twelve representatives of the workers, headed by the manager, Mr. Low Boon Kwee, yesterday met the Minister for Labour and Law, Mr. K.M. Byrne, to ask for the temporary rescindment of the ban so as to give them time to find other employment.

Mr. Low claimed that they were still uncertain if the ban was a temporary suspension of the game or a permanent prohibition.

As a result, the workers still keep coming to the place of work in case the suspension is lifted. They are not paid for it.

"The immediate closing down of the establishment has put us in a quandary and we are unable to find other jobs because it had been so sudden," he added.

At the one-hour meeting with the Minister yesterday, Mr. Low said that Mr. Byrne expressed his sympathy but said that he could not rescind the order. He would, however, bring the matter before the Cabinet and would give an answer to the delegation of the workers next Monday.

The emporium began functioning ten years ago and the workers are paid daily wages.

The Government, however, is not likely to reconsider its ban on the operation of jukeboxes and pin-tables.

The Minister for Culture, Mr S Rajaratnam said yesterday that it was up to the operators to convince the Government as to why the machines should not be banned.

Mr Rajaratnam said the suggestion by the operators that they were prepared to play classical music instead of provocative hits could not be entertained.

The Minister said it was not possible to check whether they were playing classical music as it would require a large staff of inspectors to watch them.

The decision to ban the jukeboxes and pin-tables was taken by the Ministry of Culture last week as part of the Government's policy to get rid of the "yellow culture" on the island.

Is the Singapore government so petty as to ban things like that?

And whats this about Malayans? Malaya is an outmoded, obsolete and outdated concept since the independence of Malaysia and Singapore.

We are no longer living under the British colonial rule, so whats with all this Malayan crap?

Not saying Malaysian politicians are perfect, but *some* people *coughRajaratnamcough* seems to be living in the past.

Still, its pretty extreme all the same.