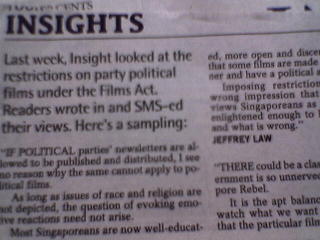 Last week, Insight looked at the restrictions on party political films under the Films Act. Readers wrote in and SMS-ed their views. Here's a sampling:

"If political parties' newsletters are allowed to be published and distributed, I see no reason why the same cannot apply to political films.

As long as issues of race and religion are not depicted, the question of evoking emotive reactions need not arise.

Most Singaporeans are now well-educated, more open and discerning. They know that some films are made in a partisan manner and have a political agenda.

Imposing restrictions may give the wrong impression that the Government views Singaporeans as immature and not enlightened enough to know what is right and what is wrong."


"There could be a classification if the Government is so unnerved by films like Singapore Rebel.

It is the apt balance between letting us watch what we want and being cautioned that a particular film's themes are controversial. I watched Singapore Rebel on the Internet and it further demonstrates that political films can be viewed by the public regardless of the Government's anachronic prohibition of political films."


"After reading the article, my immediate response is : Why not?

Are films not one way of speaking out?

Supporters of the act stress that it ensures that Singapore politics does not degenerate into an advertising slugfest during elections.

But giving electoral speeches is already a form of advertising."


"Fahrenheit 9/11 was released in 2004. It was a film dealing with political issues and was biased against the Bush administration. It was not restricted.

It was released in the year of the US elections. With the movie fresh in their minds, Americans went to vote. Bush won.

What this shows is a mature society is capable of thinking for itself. By stifling us with such restrictions, the Government is attempting to protect Singaporeans from this very thought process.

How is our society expected to progress when decisions are always being made for us?"


"We should relax the restriction. Any party can make its own party film if all the rules are followed.

The PAP can make a film about the founding of the party, its founding fathers, and about MM Lee fighting for Singapore. Because Singaporeans nowadays really don't care about our history and many don't even know our history. If the PAP truly has the support of the people, why worry?"

It is good to know that you are not alone and there are Singaporeans out there as well as the international community are giving you moral support.

whatabout politically motivated films shot by foreigners? i wonder if this double standard become a hurdle to the island country's aspiration to become a hub of documentary filmmaking community.

i know it's not easy for you, but hand in there!

We shouldn't be allowed to vote either, since democracy makes everyone present political issues in a sensational manner, evoking emotional rather than rational reactions.

Under democratic centralism, there will remain ample opportunity for all citizens to express their opinions.