The executioner and the minister - Just doing what they are told

Are our standards of punitive measures too draconian ?

Excerpt from a letter published in the Straits Times forum page

Laws shouldn't be too far off global standards

A MAN punched a lawyer in front of a judge and was sentenced to six years in jail. When he appealed to the High Court, another four years were added to his sentence, a decision which was later reversed.

A shoplifter was jailed for 11 years.

Drug traffickers caught with as little as 15g of heroin are sentenced to death. According to Amnesty International, since 1991, 400 people have been hanged, mostly for drug trafficking.

Singapore is known for its strong emphasis on law and order. However, one cannot help but feel that something is amiss in the way court sentences are sometimes meted out.

"Human beings, regrettably though it may be, are inherently vicious and have to be restrained from their viciousness. If these people said to us, cancel whipping and you will be a better society, we will underwrite this existence in human liberty, then we would abolish effective punishments and treat criminals the way Americans do."

According to the International Centre for Prison Studies, Singapore's prison population per capita is three times the world's average, and fourth highest in Asia. 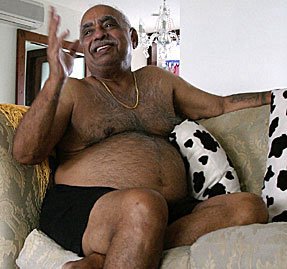 It's a dirty job but somebody has to do it.

The 73 year old grandfather is Singapore's chief executioner. He has put to death more than 850 men and women since the mid-50s. He collects S$400 for every life he snuffed out. The number of executions has propelled Singapore into the top of Amnesty's list of countries with the most per capita executions.

Until last week, no one has heard of Darshan Singh. He was finally unmasked when a journalist from The Australian covered the story of an Aussie now on death row in Changi Prison.

Mr Singh is unable to talk about his job as he is prohibited to do so under the Official Secrets Act. But when his colleague asked him why he had stayed so long in such a gruesome job, he replied: "It's all I know. It has become my bread and butter." 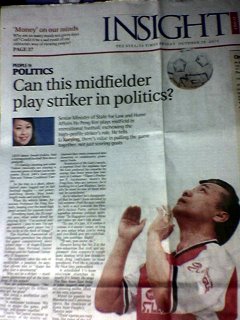 He is Singapore's Senior Minister of State for Law and Home Affairs. Ministers' salaries are hardly made public, but it is estimated that he takes home some S$3000 to S$4000 a day.

When asked what does a second-line minister like him do, he replied, "I'm Mr Wong Kan Seng's deputy. I do whatever he asks me do."

Prof Ho does not like to argue the death penalty in Parliament and put people people down in the process. He is also a Christian and considers gay sex "not natural."

Interview with Professor Ho Peng Kee published in the Straits Times on Oct 28, 2005.

On sex, values and white elephants

ST : Ministry of Home Affairs' (MHA) review of the Penal Code will be out at the end of the year. One aspect mentioned previously is the law on oral sex. Is it likely to be decriminalised?

Prof Ho : That one we're looking at.

It's a big exercise. The various ministries are still working on some of the details.

My personal take is that between men and women, if you are an adult and there's no force, then what you do in the privacy of your bedroom that has no impact on the public, then you do what you want.

What about gay sex?

It's a slippery slope. Once you move, where do you go to? So you'll talk about not just gay sex but also gay marriages, then gay adoptions...

But using the same argument, that you can do what you want in the privacy of your bedroom?

That's different because I think men and women having sex is natural. And it is also in a sense consistent with the whole idea of marriage.

Of course even if they do it outside of marriage, it is still man and woman, which is still part of this relationship.

More industrialised nations are moving away from the death penalty. Is it time for us to review this too?

The pressure can come from outside. But the question really for us in Singapore to decide what works for us.

To me, the large majority of Singaporeans accept our penal system, that, yes, it is tough but it is also fair.

But we're not a society that advocates just hard punishment. We've also softened it when appropriate and home detention is an example.

We introduced it in 2000 and 6,000 people have gone through it. This is something which is actually quite revolutionary. Not many countries have done it this way but we are prepared to do it.

Do you feel Singapore has been made a laughing stock over the investigation into the white elephant protest over the Buangkok station? Many Singaporeans feel it was a creative protest and it's somewhat over the top to have the police investigate.

The police have investigated where a complaint is lodged ... it violates the Public Entertainment Act.

What if the exhibit was something else, maybe something obscene?

I don't think people would say we are a laughing stock. People would say that we are an orderly society that believes in the rule of law and also the professionalism of the police in being consistent.

Often the Government justifies its actions saying it's simply following the law. Do you think that old laws, such as this and that five people constitute an illegal assembly, trap the Government in old behaviour and old ways of reacting - even when society itself has changed?

We examine the relevance of our laws all the time.

Regarding the illegal assembly law, I think nobody can argue that the mischief is being addressed, if there are crowds of people gathering causing disorder, causing fear, causing disruption to traffic...

Laws are in place for good reasons. But whether the parameters can be changed over time, I'll say yes, because no law is cast in stone.

If you ask why five and not 10, well, some number has to be drawn.

As a Christian, do your religious beliefs affect you in decision making?

You have to make decisions according to policies, what is right for Singapore, and Singapore is secular.

But as a mature religious person, your values are internalised. That's how you act, speak, present yourself. But you don't think, oh, as a Christian, what should this policy be?

At temples for instance, I attend festivals and so on, just that I don't hold joss-sticks.

You said gay sex is "not natural". Is that something that comes out of your religious beliefs?

Yes, could be. Well, I won't attribute it directly. I look at it more as a family bedrock thing, that a family is based on a man and a woman. I think all the main religions in Singapore believe it's how we are made.

What is exactly that second-line ministers like you do?

Depends a lot on the minister and also on who else is there.

So in MHA, I'm Mr Wong Kan Seng's deputy. I do whatever he asks me do because initially, he also has to find a level of confidence in me. So if he feels comfortable enough, then he gives me more work and I do more. Over time, I can also run a bit on my own.

You mentioned earlier that you're not a natural politician. What do you mean by that?

I think people assume Singaporean politicians to be quite tough, hard-headed and I'm not naturally that kind of person. I can be tough, I can be hard but I think naturally I'm of the softer type.

I can make tough decisions but I'll probably agonise a bit.

Which was your most agonising decision?

In MHA, you've to defend the death penalty, you have to argue in Parliament and put people down, and I don't enjoy doing it.

You made the election promise in 2001 that Nee Soon East will be kept a single-seat ward. The final decision lies with the Prime Minister, but do you think it's a promise you can keep?

I hope so. This one, cannot leak secrets, otherwise the opposition will also know. (laughs) Put yourself in my position. I will lose credibility if it's not a single seat.
Posted by MIng at 10:06 PM

I am deeply in love with every single piece of information you post here. Will be back often to read more updates! Please come visit my site business development
when you got time.

Glad I stumbled into this article! Finally, got what I was looking for to put on my school report... Thanks for sharing this. I would love some feedback on my site the coaching academy
when you got time.

I forgot about those! Maybe they look good w/ the right outfit? I didn't like skinny jeans when I first saw them. lol. Please come visit my site rental cars give me any valuable feedbacks.

I'm glad you're back to posting. I love reading about your shopping adventures and great finds. Your outfits are always super cute too! Very inspirational. Please come visit my site trailer when you got time.

I found your blog on google and read a few Thanks for the information you mentioned here, I'm looking forward to see your future posts. Cheers !! Please come visit my site clinical lab give me any valuable feedbacks.

I am deeply in love with every single piece of information you post here. Will be back often to read more updates! Please come visit my site adoptive parents when you got time.