Emailed to the Straits Times forum.

In the article "$570m upgrading package for north-east districts" (ST, Dec 1), it was reported that a five minute video was screened at a dinner organised by the Sembawang Town Council to pay tribute to former Deputy Prime Minister Dr Tony Tan. The video had included images of Dr Tan's activities as Member of Parliament for Sembawang GRC.

According to the Films Act, it is an offence to import, make, distribute or exhibit a film which contains "wholly or partly either partisan or biased references or comments on any political matter", including those of a Member of Parliament. Such a film is deemed to be a "party political film", an offence punishable by a maximum fine of $100,000 or a two-year prison sentence. I am currently being investigated by the police for such an offence.

In order to prevent other unsuspecting film-makers from being be called up by the police for making similar films, I hope the relevant authorities can clarify if the aforementioned videos had breached the Films Act. 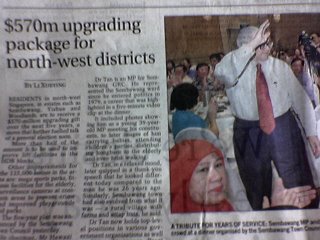 Dr Tan is an MP for Sembawang GRC. He represented the Sembawang ward since he entered politics in 1979, a career that was highlighted in a five-minute video clip at the dinner.

It included photos showing him as young 39-year old MP meeting his constituents, to later images of him carrying babies, attending children's parties, distributing hongbaos to the elderly and even brisk walking.
Posted by MIng at 12:50 PM

No lah as long as the Minister say it is not a Party Political film then it is not. Simple as that..... how come Martyn you cannot understand the Film Act?! No wonder you are in trouble for breaking it.

PAP can go and fuck themselves!