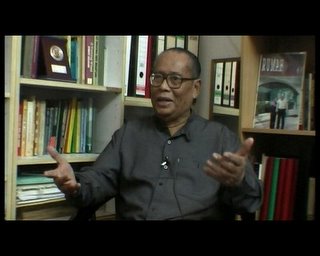 In the early hours of 2nd February 1963, security police in Singapore launched Operation Coldstore - the mass arrests and detention of more than a hundred leaders and activists of political parties, trade unions and student movements, for their alleged involvement in "leftist" or "communist" activities. One of those arrested was former newspaper editor Said Zahari, who had been appointed the leader of an opposition party just three hours earlier. A staunch anti-colonialist, Zahari had assumed that the mass arrests, set against the backdrop of Singapore's struggle for independence, was no more than yet another turn of event in a politically volatile era. Freedom for him and the others, it seemed, would be secured once Singapore gained full independence. On 9th of August 1965, by way of its separation from Malaysia, Singapore finally gained full independence and sovereignty. And as the republic embarked on a determined quest for economic prosperity, it dawned on Zahari that his new-found Singaporean citizenship did not accord him freedom. By the time he was released in 1979, he had spent a total of 17 years in detention without trial. He now holds the distinction of being the second longest-serving political detainee in Singapore after Chia Thye Poh. Ex-detainees of the Internal Security Act, which allows for indefinite detention without trial, are often reluctant to publicise their experiences. Zahari's 17 Years marks the first time that an ex-political detainee has broken his silence on film. Said Zahari's upcoming book, entitled "The Long Nightmare - 17 Years in Lee Kuan Yew's Prison", is the second volume of his trilogy of memoirs which recount his experiences in detention and the anti-colonial struggles of his generation. Director
Zahari's 17 Years is directed, shot and edited by Martyn See. Martyn See is currently undergoing police investigation for his first film, 'Singapore Rebel', which has been banned by the Singapore authorities for violating the Films Act pertaining to political films. If convicted, he faced a maximum sentence of two years imprisonment or a S$100,000 fine. __________________________________________________________________

Excerpt from the Straits Times round-up of political news stories in 2005, published on 31st Dec 2005 Political expression: Speaking up This year has been a year of white elephants, a silent banner/T-shirt protest and a documentary on an opposition politician. The results so far: Several police investigations and a warning, leading to criticism of a clampdown on political expression. Will similar attempts be made next year? Insight is betting on it. The warnings may dissuade some would-be "protesters" but there will be others tempted to push the boundaries to see if the Government will honour its promise to open up. When that happens, it will certainly spark more debate. Businessman Ong Yang Peng, 59, is one of many who are still bristling over the Case of the White Elephants. He says: "Freedom of political expression is the primary means for Singaporeans to feel ownership of their country...If they have no hand in determining the future of the country, how do they feel a sense of ownership?" He wants the Public Entertainment Act to be amended or even scrapped, to give room for "creativity". The Government has said it would reviewed the Films Act, which had caused film-maker Martyn See's documentary on opposition leader Chee Soon Juan to be banned and confiscated by the police. Singapore Rebel was defined as a "party political film", but Minister Mentor Lee Kuan Yew had said he would not objected to it. No date has been set for the reviewing of the Films Act, but Mr See looks set to revive the debate over whether it is too limiting. He has made another political documentary about an opposition figure: Mr Said Zahari, the former president of opposition party Partai Rakyat Singapura. Now aged 77, Mr Said was detained for 17 years after he was arrested in 1963 on suspicion of being a communist. Says MP Amy Khor of moves to open up: "We really have no choice... With growing affluence and education come the aspirations of the people to have a bigger say in the manner in which their country is governed, and to exercise their democratic rights beyond the ballot box, and in the arena of shaping public policy."
Posted by MIng at 11:09 AM

Thank you for this information.

All Zahari needed to do was to sign a piece of paper to be released. Anyone in Singapore cannot sacrifice his principles for his self interest in not worthy of being a good Singaporean.

Look at how our ministers and senior ministers approve for themselves to million dollar salaries and our MPs sit on boards of highly profitable companies to collect director fees- and yet the people of singapore stand solidly behind them. These are the men that should be respected.... not the die hard freedom fighters like Zahari and JBJ.

THere is nobody Singaporeans despise more than those who to not work successfully for their own personal gain. If they can satisfy their own selfish interest, what hope is there for them taking care of the interest of the people.

Anonymous - you comments are ridiculous. These men should be respect because they refuse to bow down to a suppressive government. Would you sell anything for something you didn't believe in? Your wife, kids, your family? These men gave their lives for something they believed in and yet today they are hardly mention in history.

And your comments about selfishness are utterly disgusting. Weren't you not brought up right? I hope that one day that you suffer a fate where one's selfish personal interest causes you pain and see how it feels like.

Er, I think 'Anonymous' was probably being sarcastic.