Some enterprising Singaporeans in Toronto have started a film festival to showcase Singaporean works there. And I don't think they are doing it on the behest of any government initiative. Just read the synopses of these two films (I swear I have no hand in the writings). 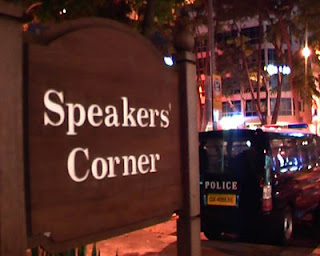 
Shot over several days in September 2006, when Singapore hosted the World Bank and International Monetary Fund Annual Meetings, Speakers Cornered captures the thwarted attempts of nonviolence activists to protest peacefully at Speakers' Corner, a park designated for those with the urge to mount their soapboxes - though, as per the Singaporean way, not without first securing police blessing. In Martyn See's latest film, the park's legendary status as a white elephant without clothes is cast in cold hard stone. Living up to its title, its seventeen chapters reveal that to be shackled in Singapore is no metaphor. Stunning and yet strangely amusing, the litany of oppressions catalogued in Speakers Cornered are nothing if not an embarrassment to Singapore. Singapore's authorities have seen the events that unfolded that week. Why shouldn't anyone else? 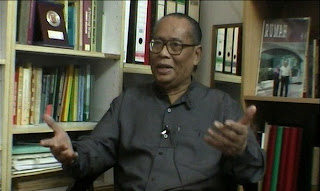 
Martyn See's second film, 78-year-old self-exiled journalist, poet and author Said Zahari reflects candidly on his seventeen years in detention without trial - the first time a Singaporean has spoken about the experience on film. In 1963, two years before Singapore's independence, security police detained about a hundred opposition leaders, political activists and trade unionists for alleged leftist and communist activities. The new leader of an opposition party at the time, Said was convinced that his arrest was temporary, given the backdrop of Singapore's turbulent struggle for sovereignty. He was wrong, forces having conspired against him. Look out for Lee Kuan Yew in a verbal cameo as a "political coward" whose founding father status Said categorically denounces. A trenchant and humbling encounter, Zahari's 17 Years is also one of the program's most poignant films.

According to its website, there will be a preview highlights of the 1st Toronto-Singapore Film Festival in Singapore on Friday, February 23, 2007 (9pm) and
Saturday, February 24, 2007 (7pm)
Venue: Pitch Black, 63 Haji Lane (Singapore)
Tickets: S$8

Call Pitch Black at 63923457 or email crew@pitchblack.com.
Tickets will also be sold at the door. Hurry, seating is limited!
Filmmakers will be in attendance on both nights.
Posted by MIng at 8:17 PM

I've been following your work and the Singaporean Film Act in an effort to understand the nature of your country's struggle for democracy and the boundaries and limitations under which you labor. Thank you for sharing all of the news on your blog--this is a fine, informative documentation.

I wish I could travel the seven hours north to Toronto to catch your films, but I can not. Is there any chance that you might acompany your works Singapore Rebel and Zahari's 17 Years to Pittsburgh, Pennsylvania anytime?

I realize this is a long shot, but we have several venues in which your films might be shown with discussions and a reception. I have linked your site to my own blog and will contine to follow along as I work on an article dealing with the obstacles and realities of making documentary films in this new era.

hi.. why dont u upload your films speakers cornered and Zahari's 17 Years online for people to download and view?

otherwise where can we singaporeans watch them?