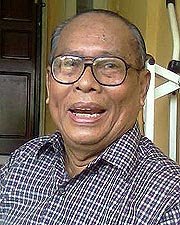 Said, who is the former editor-in-chief of Utusan Melayu, said the main reason could be that Singapore does not want its younger generation to know the political history of the state during the 50s and 60s.

“The (Singapore) government is afraid that more and more people will know about the nation’s history,” he added when contacted today.

However, Said, who was detained for 17 years, also said the move to ban the film was surprising because it has been around for the past one year.

“I have not seen the (Singapore) government’s statement but I don’t understand why they want to ban it only now?” he asked.

According to Said, what he had revealed during the 50-minute film was just a minor portion of what he had written in his book Dark Clouds at Daw published in Malaysia in 2001.

A Reuters report yesterday stated that Singapore’s Ministry of Information, Communications and Arts had banned the film because it went against public interest.

“The film gives a distorted and misleading portrayal of Said’s arrest and detention under the Internal Security Act (of Singapore),” said the ministry.

It claimed that the film was an attempt by Said “to exculpate himself from his past involvement in communist united front activities against the interests of Singapore.”

The ministry said the film had to be banned because it posed a security threat as it sought to undermine public confidence in the government.

The film’s director has been asked to turn over all copies of the film by Singapore’s Media Development Authority.

Previously, See was investigated by the Singapore police after he produced a documentary about opposition leader Chee Soon Juan in 2005.


Government bans film on journalist detained without trial for 17 years

Country/Topic: Singapore
Date: 20 April 2007
Source: Southeast Asian Press Alliance (SEAPA)
Person(s): Martyn See, Said Zahari
Target(s): other
Type(s) of violation(s): banned
Urgency: Threat
(SEAPA/IFEX) - The Singapore government has banned an independent film about a former top journalist and political activist who was held without trial for 17 years in the island republic, deeming the documentary to be "against public interests".


"Zahari's 17 years" by local filmmaker Martyn See is a 49-minute interview with Said Zahari about his arrest and subsequent detention under the draconian Internal Security Act in 1963.

In a statement on 10 April 2007, the Ministry of Information, Communications and the Arts announced the ban under the Film Act, saying the documentary was an attempt by Said "to exculpate himself from his past involvement in communist united front activities against the interests of Singapore".

"The government will not allow people who had posed a security threat to the country in the past to exploit the use of films to purvey a false and distorted portrayal of their past actions and detention by the government," the ministry said, adding that this may "undermine public confidence in the government."

However, Said's political memoir, "Dark Clouds at Dawn", on which the film interview is based, is available in local stores. Said is most famed for staging a three-month strike against a political takeover of the then-leading nationalist newspaper, "Utusan Melayu", of which he was editor-in-chief in 1961. He failed to prevent the takeover, but earned a place in the history of Malaysia and Singapore for leading the first and, until today, only journalists' strike over the principle of press freedom.

"Zahari's 17 years" is not listed in the Media Development Authority's database of classified films, although reportedly given a PG (parental guidance required) rating twice in 2006, when it was submitted for screening at the Singapore International Film Festival in January and a film symposium in August. On both occasions, the film was never screened, with no reasons given. An application for an exhibition licence in January 2007 was abandoned midway, and the ban followed three months later.

As the ban covers exhibition, possession and distribution of the film, See surrendered his master copy to the censors on 11 April. However, the film can be viewed at: (Do a search on google video - Martyn)

This is the second documentary by See to be banned. In 2005, police investigated him for 15 months after he produced "Singapore Rebel", which documents the trials and tribulations of opposition leader Dr Chee Soon Juan, who has been imprisoned repeatedly for exercising his right to free speech and sued for defaming present and past prime ministers (see IFEX alerts of 26 September, 31 August, 11 May and 23 March 2005).

Taken off the blog of Malaysian journalist James Wong Wing-On

Those who have read Singapore's former PM and SM, MM Lee Kuan Yew's memoirs know for sure that the name of Said Zahari never appears as a historical record, let alone the reason or reasons for his 17-year detention without trial under Lee's premiership. Now, according to the Ministry of Information, Communication and Arts of Singapore which has recently banned a made-in-Singapore historical documentary about Said Zahari, the latter was allegedly involved in what is said to be "communist united front activities against the interests of Singapore". However, my friend Amir Muhammad's films Lelaki Komunist Terakhir and Apa Khabar Orang Kampung which documents the stories of self-identified hardcore and real communists like Chin Peng, Abdullah C.D, Suriani Abdullah, Abu Samah and other can still be screened and watched publicly in Singapore. Said Zahari, the trilingual former editor-in-chief of Utusan Melayu whose computer was stolen from his Subang house together with the manuscript of the last installment of his trilogical memoirs during last year's Christmas vacation, of course, now lives in Malaysia as my cherished neighbour, good friend and esteemed sifu .
Posted by MIng at 8:48 PM