Transcript excerpts of Lees vs Chees 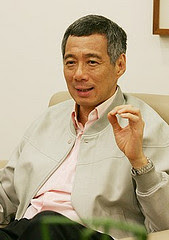 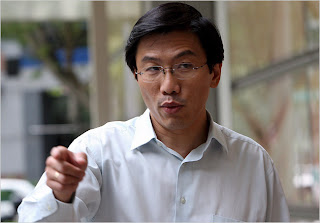 The following excerpts of court transcripts were first posted on SDP's website here and here. I was in the public gallery when the exchange took place so I can testify that they are true. I am posting them here again for sake of posterity.

If you don't know the background of this case, read this, this, this and this. Meanwhile, another member of the public gallery that day, Gopalan Nair - a former dissident who has since taken up US citizenship - has issued a challenge to PM Lee Hsien Loong and MM Lee Kuan Yew to sue him for libel. Read his account of the trial here.

Mr Lee Hsien Loong starts reading. Just before he gets to the words he uttered about fixing the opposition and buying over his supporters, Mr Davinder Singh stands up.

Chee: This paragraph will show it's true of him -

Judge Move on, the question is disallowed.

Chee: He has used words like "fix" and "buy votes". He's here to tell me that his reputation is based on so much. I’m here to demolish it, when he buys votes -

Chee: Let it be recorded then. Mr Lee, come out and don’t hide behind your counsel. You have every opportunity to answer the questions. You allow your counsel to cover -

Chee: Mr Lee, please refer to pg 39 of your AEIC sub-heading "lack of transparency." Do you agree with the last line and last paragraph that the GIC operates in secrecy?

Singh: Objection. Dr Chee is seeking to reopen the issue. This article relates to the offending words. The meaning has been taken to be false. The question of liability is done.

Chee: Turn then to pg 75 of your AEIC, bottom of the page. Is the Government transparent? Do you agree with this statement?

Chee: Do you believe the funds belongs to the people?

Chee: Same line and reason, that he is the Prime Minister and takes pride in the integrity -

Singh: The question is on the matter of Assesment of Damages -

Chee: You are the Deputy or the Vice Chairman of the GIC?

Chee: I want to establish that he says his reputation is sterling -

Singh: My client didn’t say that.

Chee: How and where you have invested the GIC funds?

Chee: Were you aware of the scandal at NKF -

Singh: Relevancy? NKF is a matter of liability.

Chee: Then you agree that T T Durai's salary was excessive?

Chee: Do you agree the salary -

Singh: Your Honour, my client was not aware of the NKF scandal -

Chee: If T T Durai had a summary judgement -

Chee: Do you agree that the openness of the Government -

Chee: I disagree as the witness was a Prime Minister during the period and argued in Parliament -

Singh: Maybe the Health Ministry was misled and my client did not know. The Government did proceed to investigate the matter.

Chee: The Ministry of Finance and the Ministry of Health made comments and continued leading the people to donate to the NKF. You were the Prime Minister -

Chee: Did you know the warning signals -

Chee: These were raised in Parliament and whether he was sleeping like some of his colleagues -

Singh: That is not necessary and insulting -

Singh: I want to remind Dr Chee of the injunction against repeating -

Chee: Do you agree if the salary is too much?

Chee: Do you think that your Ministers spend too much -

Chee: I put to you that the PAP is bent on greed and power.

Chee Refer to pg 9 of your AEIC. Is the information on the cost of labour of building HDB flats available?

Chee: Is information on the cost of material of building HDB flats available?

Chee: Do you agree that the HDB is operating in secrecy?

This should be telecast on TV like crime watch. Then we can see who is commiting crime.

Basically what kind reputation would a person have if he has politically persecuted a fellow human being to the point of destroying more than 30 years of the poor man's life and brought untold suffering to his family members. All because of his own political ambition ?

I can only conclude that such a person is unscrupulously evil and selfish, in the same league as Saddam Hussein, Hitler, etc.

Let's see how our kangaroo courts will value the reputation of such a person.

If so, I would love to hear or watch in on Youtube. Please upload.

Are you simpletons for real?

And then now he's using the court proceedings like a rabid publicity whore and you people are actually entertaining the thought that the judge is biased.

Has Dr Chee "zero credibility" as alleged? I beg to differ. It is Lee Kuan Yew who is eroding his own credibility, if the court transcript is read carefully. By saying, "Now that the assets that we have and I am not disclosing this but Global Financial Services assessed Singapore's sovereign wealth fund at over $300 billion," he is confirming the lack of transparecy reminiscent of the NKF saga. Sad, so sad, that he is going the way of Ferdinand Marcos; once a fearless lawyer fighting for the little people, he is now a victum of his own excesses. the only difference is, he doesn't have a Imelda to blame.

Can someone in the legal industry care to explain what is "Quantum Damage" and the basis of the court hearing for the aforesaid. It is hard for layman to understand clearly whether the exchanges are of any relevance. I think without a clear understanding of the intend of the court hearing and its purpose under the current law, comments posted may not be impartial but out of sympathy or preconceived believes.

I might not agree with the PAP / LKY with a lot of issues, but that doesn't somehow make Chee any more credible.

Look, this is the same person that stole his NUS research funds to finance his sister's thesis, among other dodgy things. This is the same person that got sued for countless other baseless accusations and has not managed to provide PROOF for anyone of them in court or otherwise. For example, this "NKF trial" is one of them. Instead of providing proof for his wild claims, he uses the court as an avenue to advertise his other agendas (as the transcripts show). What a goddamn waste of everyone's time. No wonder he got charged with contempt.

I wouldn't trust CSJ with a dime, let alone govt funds if he ever got elected. God forbid.

Like the previous anonymous commenter has stated. Can someone please explain the context of these proceedings?

All I can tell is that there is a series of annoying series of objections but never any clear justification of irrelevance other than "Quantum of Damages". Specific questions would be:

1) What is involved in proceedings to determine Quantum of Damages?

2) What is considered relevant or irrelevant in such cases?

3) Why did Justice Belinda Ang shut CSJ out when he tried to explain his line of questioning? Why did she not wait for him to complete his explanation and then tell him why this line is irrelevant? This happened somewhere near the beginning, the rest of it seemed like it became a farce with CSJ apparently trying to force through a line of questioning he knows will be rejected.

I would just like to have a way to form an informed opinion of this case.