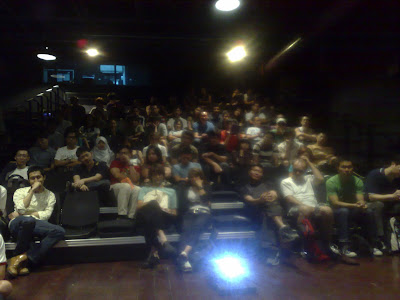 Audience at the Substation Arts Centre during the Q&A session

The 28 minute documentary capped a matinee of films that included Twogether by Victric Thng, Bedok Jetty by Boo Junfeng and Caramel / 黑默糖 by Kelvin Ke. Blank Rounds, a film about National Service, was withdrawn by its director Green Zeng due to a change in screening venue. An insider scoop has it that the yesterday's screening was originally slated to be held at the much larger National Museum Gallery Theatre, but was moved to the Substation theatre for "logistical" reasons. All tickets for the entire festival have been snapped up.

Speakers Cornered is my third film. The first two, Singapore Rebel and Zahari's 17 Years, are banned by the Singapore Government. I have recently submitted Nation Builders to the censors.

* Raintree Pictures has gone public with their intention to make a political feature film about Singapore's independence, tentatively entitled 1965.

* There is still no word about the status of One Nation Under Lee, a film by local artist Seelan Palay which Government officials seized during its private premiere.
Posted by MIng at 1:45 PM

I watched all 3 of your great films..

Thank you Martyn, for showing us what we can't see / get from our state control media..

You did a great job..

Looking forward to watching more of your films..