"The essence of the rule of law is that the law applies to all."
- Singapore's Attorney General Walter Woon, Straits Times Jan 4, 2009 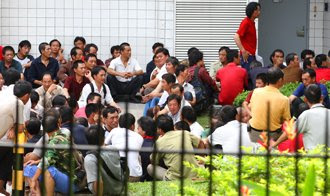 Over 200 Chinese nationals held a sit-in in front of the Ministry of Manpower building to protest against salary arrears on December 30 2008. They were not arrested. Link here.
Video here by Ho Choon Hiong (It's not Apocalypse Now but enjoy) 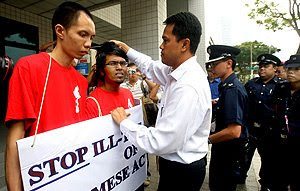 Singaporeans Seelan Palay and Chong Kai Xiong were arrested this afternoon in front of the same MOM building for staging a protest in support of Burmese nationals allegedly being forced to leave the country for their pro-democracy activities. They were released four hours later and are now being investigated for alleged criminal trespass. Link here and response by Ministry here.


One Law For This

A seven-part documentary, produced by the Ministry of Information, Communications and the Arts, which traces the ruling People's Action Party's ride to power on the back of the "Communist Tiger" in pre-independent Singapore. The DVD is freely available in Singapore. 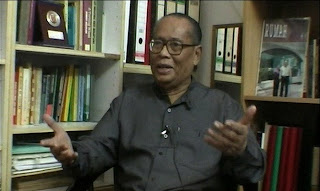 A still from Zahari's 17 Years, a documentary produced by local filmmaker Martyn See which features a protracted interview with Said Zahari, an ex-journalist accused by the Singapore Government of being a communist and subsequently detained for 17 years without trial. It is currently banned by the Minister of Information, Communications and the Arts for allegedly "undermin[ing] public confidence in the government."

Double standards. So we shall also be like that.

Come up, don't be so naive. How u expect the Police to arrest those Chinese nationals who were trying to get back what they deserved, their hard-earned money. Unlike the 2 stupid idiots who "cho boh lan", the Chinese nationals did not protest just for the sake of challenging the rule of law. The 2 clowns are just as naive as you.