Ouch! The Online Citizen has received an email from a certain Ms Janet Wee who has allegedly lodged a police complaint against TOC for posting the link to this article which she claimed to contain "seditious remarks" about Lee Kuan Yew. TOC added that the "her email is also addressed to several other people, including MM Lee Kuan Yew, the Attorney-General, Mr Jeremy Au Yeong of the Straits Times, Google, among others."

1. Thank you, Ms Wee, for catapulting an online article which at best would attract a few thousand eyeballs to possibly tens of thousands of viewership if the mainstream press decides to run your police complaint. It would drive traffic to TOC, to this blog and hopefully more sales for the book Fajar Generation.

2. Ms Wee, you are barking up the wrong tree. TOC merely carried the link to my article. The allegedly "seditious" headline is mine. I have based it on an excerpt from the book The Fajar Generation, which had reproduced a report of a conversation between Lee Kuan Yew and then Acting British Commissioner Philip Moore. Therefore, may I suggest that the proper protocol would be to file a police complaint against me, against the publishers of The Fajar Generation, and finally against the National Archives in UK.

3. While you're at it, I suggest you also lodge complaints against this, this and this. 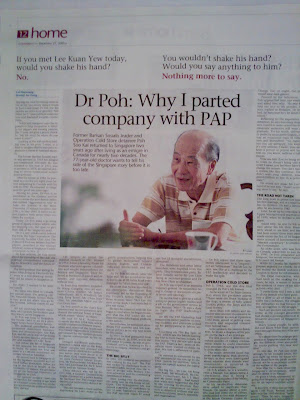 Drawing from the archival records in London, Dr Poh Soo Kai, a founding member of the PAP and former leader of the opposition Barisan Sosialis, debunks a long-held perception that the Barisan was a security threat to Singapore and hence the justification for the mass arrests of Operation Coldstore in 1963.

Below is an excerpt from the newly-published The Fajar Generation. 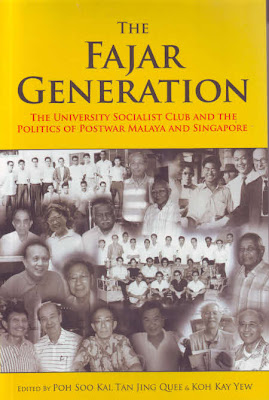 Holding the post of assistant secretary general (assistant to Lim Chin Siong), and thus the leadership, was one of the accusations. The Barisan Sosialis was labelled a security threat, a communist front organisation and we, as its leaders, were automatically painted as 'Red'. The implication was we were carrying out orders from the Malayan Communist Party (MCP).

In 1957, the leadership of the PAP, wishing to have tighter grip of the party, decided to change the original democratic constitution. The organisational inspiration was said to come from looking at the Vatican. There the Pope appoints the cardinals, who then appoint the Pope. It has lasted the church 2,000 years. So after purging its membership of 'leftist elements' PAP divided the remainder into two sections into an elite cadre membership and ordinary members. Only the carefully chosen and obviously security-screened cadres had the right to vote for the central committee, effectively the leadership. Lim Hock Siew, a founder member was expelled. I, who had attended the meetings to form the PAP at the basement of Lee Kuan Yew's home, was demoted to ordinary membership. The leadership appoints the cadres, and the cadres the leadership. It would appear watertight and should last a few hundred years. But what was lacking was trust if not divine inspiration and faith. When it was necessary to expel Ong Eng Guan, Ong Eng Guan challenged the leadership to face the cadres - those 250 odd chosen men who had appointed him and other central committee members. He maintained his expulsion was illegal and unconstitutional as only a mass cadres meeting had the power to expel him (Straits Times, 30 July 1960). No such cadres meeting was ever called. The PAP leadership dare not face its chosen cadres.

When the Barisan Sosialis was formed these cadres led the PAP branches over, one branch after another. The PAP became a hollowed-out political party, a shell. Its strength lay in the hold it had on the establishment. Even Lee Kuan Yew's Tanjong Pagar branch crossed over. Had the security scrutiny been negligent? These 250 odd cadres were transformed overnight into security risks. And many of them were arrested under Operation Cold Store. The lesson learnt from such a massive exodus of chosen cadres and the total collapse of the party structure was to change the Vatican-structure model into a civil service structure model. Fear and personal gain, not conviction or faith, were the fundamental unifying force. 'He [LKY] said, amongst other things that everyone was afraid and all the civil servants had jitters' (Selkirk, CO 1030/1149, 27 July 1961). 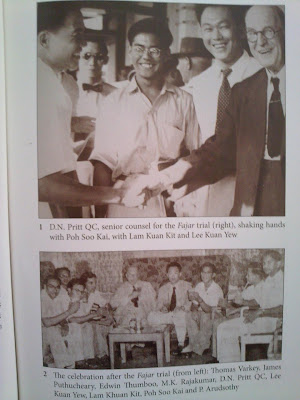 The Barisan Sosialis was a legal, constitutional political party. It was dedicated to struggling for independence by peaceful constitutional means. It did not advocate the violent overthrow of the regime. It was, however, staunchly and uncompromisingly anti-colonial and for democracy and peace. The leadership of the BS believed in democracy and this was reflected in its constitution and its organisational structure. Party decisions were made openly, transparently and democratically, after discussion, by the branches and then by the central working committee. Everybody had a say. Nobody would stick his neck out if he had no say. There was trust and no intrigues. We maintained close democratic relationships with the branches and members. We did not received instructions from any organisation or from any country be it the Soviet Union, China, the UK or the USA. Many in the leadership did belong to trade unions and other civil and constitutional organisations. We were biased - on the side of the working class.

The Barisan Sosialis was then the strongest political force in Singapore and its leadership united and staunchly anti-colonial in their outlook. That was the reason for the alarm. That it believed in democracy and constitutional struggle and was expected to win in any free and fair election was the reason for repressive action. The PAP was afraid of the odium that would go with repression while the colonial power was still around, afraid of going the Lim Yew Hock way. But the PAP leadership desired repression to save itself; thus its neurotic behaviour.

In a conversation with Selkirk, on 28 July 1961, at time of the formation of the Barisan Sosialis, Moore reported Lee Kuan Yew's tactics in the following terms:

He went on to suggest that in order to avoid the Communists taking over, he would create a situation in which the UK Commissioner would be forced to suspend the Constitution. This might be done either by the Singapore Government inviting a Russian trade mission to Singapore thus forcing a constitutional crisis, or by instigating riots and disorder, requiring the intervention of British troops. I did, however, form the impression that he was quite certain he would lose a general election and was seriously toying with the thought of forcing British intervention in order to prevent his political enemies from forming a government (CO 1030/1149, p. 95, para 3).

The 'anti-colonial fighters', the PAP leadership, wanted to ride to power on the backs of British armoured carriers. In a similar vein, the Washington Telegram No. 2186 of 31 August 1961 states:

Para 2. LKY's position is precarious ... emphasise the need for British government to reach a decision on transfer of Borneo Territories as soon as possible, so as to clear way for merger.

Para 3. Americans thinking in terms of the need for repressive measures here to prevent a communist takeover through Barisan Sosialis. The suggestion is that ideally Lee himself should take the initiative and lock up a number of people but that otherwise the British should do it (DO 169/19 Tel. 402).

Above is only an excerpt of a 361 page book The Fajar Generation. It is published by Strategic Information and Research Development Centre or SIRD. It is edited by Poh Soo Kai, Tan Jing Quee and Koh Kay Yew. Foreword by Lim Kean Chye, founder member of Malayan Democratic Union (MDU).

The book is available at Select Books at S$24.

Alternatively, you can purchase online by sending an email to: theonlinecitizen@gmail.com.
The price by mail order is S$34.24 (GST included).

The Fajar Generation by TOC

Lim Chin Siong vs Lee Kuan Yew: The true and shocking history
Part I: Our man
Part II: Get him!
Part III: The end of Lim Chin Siong
Part IV (final): What they teach in school
Posted by MIng at 3:33 PM