The coming around of Chee Soon Juan and SDP? 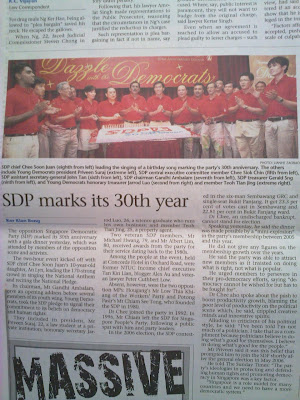 Five years ago in the police station, I was interrogated by the police over the making of my documentary Singapore Rebel. Photographs and minutes of the Singapore Democratic Party's (SDP) meetings and activities were produced in front me, and I was asked to identify faces in those snapshots. How did the photographs and minutes end up with the police? Did the police have moles planted in the opposition? Is Lee Kuan Yew an autocrat? You go figure. What was unmistakable to me at that time was that there was a concerted attempt by the Government and the police to create a spectre of criminalization around Dr Chee Soon Juan and anything/anybody that he engages. The agenda couldn't have been more plain : Isolate Chee, pick him off, and like Lee himself said many years ago as an opposition MP, the outcome would be that miraculously everything will be tranquil on the surface.

Last night, SDP held its 30th Anniversary bash at the Concorde Hotel. Amid the pomp and pageantry were about a hundred guests, including foreign diplomats, civil society activists and members of the opposition. Noticeably absent, and perhaps an indication that the Government's decade-and-a-half campaign to marginalize Chee is still holding sway, is the no show from the entire Workers' Party, including Low Thia Khiang and Sylvia Lim, and the founder of SDP himself, Chiam See Tong, now with the SPP. Strikingly, all three are currently the only opposition members of Singapore's Parliament. Surprisingly, joining the list of absentees was a new kid of the opposition block, Kenneth Jeyaretnam of the Reform Party. (read rejoinder from Jeyaretnam under comments)

But having witnessed the trajectory of Chee's political career - from the toil of libel suits, bankruptcy and relentless criticisms to the merrymaking last night - it was a kind of a miracle to behold. Not the tranquil kind that Lee alluded to, but of a coming around - For Chee, his party and the people who now saw no fear to be seen fraternizing with the Government's favourite whipping boy.

There is also a coming around of sorts with the authorities. Two years ago, Government censors showed up with the police to seize a dvd of a film premiere organized by the SDP. (see video here and here). Last night, videos of congratulatory messages were blasted without interruptions. 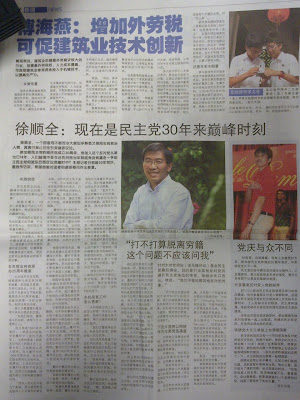 Then this morning, the most glaring coming around happened. The mainstream press, a longtime accessory of the Government's character assassination campaign against Chee and SDP, suddenly saw fit to publish a review of the anniversary dinner and an almost full page interview with Chee himself.

When did you last see a smiling Chee Soon Juan in the newspapers? And the group photo in the Sunday Times looks fit for a propaganda piece for the PAP, except that the uniforms are red, not white. What gave rise to the Sunday Times and Zaobao's sudden habit-breaking behavioural switch to feature Chee Soon Juan and SDP in their pages? And without the usual demonization too?

Perhaps there is a tacit recognition that a bankrupted Chee is already a spent force and thus not a political threat? Perhaps Lee Kuan Yew, after clashing with the Chee siblings in court, saw for himself horns didn't grow out of their skulls? Perhaps the political desks of ST and Zaobao needed to fill their quotas of articles per month?

Whatever the motivations are, one thing is certain - Chee Soon Juan and the Singapore Democratic Party are not the sort to crave for mainstream media coverage. Anybody who knows Chee can attest that there isn't one Singaporean who distrusts the MSM more. In recent years, the party has resigned itself to the use of the internet and street hawking of publications to engage the citizenry.

That the MSM has now come knocking on Chee's door, despite his open criticisms of them, is something of a revelation. More interesting to me, are how the dynamics in opposition politics have suddenly shifted. Now that the press has nudged SDP closer to the mainstream, will it then follow that the absentees of the night's function will be less afraid to associate themselves with Chee and SDP?

One of my principal aims when making Singapore Rebel was to inspire a rethink of perceptions, but now ironically, the mainstream press has done what I set out to do five years ago. Perhaps I need to look for another subject to break perceptions and taboos with.. 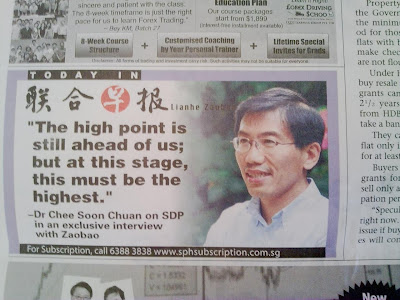 Chee speaks up on Chiam

Dear Martin
I had let the SDP know as soon as the event was announced that I have an appointment overseas on the same date. I am still in London now and returning this coming week. However before I left and again from over here I rallied my troops and made sure that a number of us from RP attended to show our support. In addition I wrote to Dr Chee to let him know that Tony Tan was attending as my proxy and to give him a message of congratulations to read out if he so chose. In fact 6 members of the RP attended. This compares to 1 NSP and 2 SDA. In a more civilised political environment it would be perfectly understandable that an SG would deputise someone else to attend in his place. especially someone with a high profile such as Tony Tan. It's a pity that Dr Chee chose not to share my congratulatory message but even if you personally were unaware of the circumstances it would still have been appropriate to consider thanking RP for their show of support instead of criticising them. Maybe next time we won't bother.

Much thanks for your prompt clarification to the readers.

Any issue that you may have with Chee regarding your congratulatory message is really between you and SDP. Please write to him to sort him out.

As for me, I was observing the event as a citizen journalist and all views expressed are mine alone.

I would encourage Tony and other members who attended the function to post their views too so that readers have a broader sense of what transpired. This is the beauty of the open discourse of the internet. There is really no need to feel aggrieved.

Enjoy the rest of your time in London.

Dr Chee did not read out congratulatory messages from anyone!

Gandhi Ambalam acknowledged with thanks the presence of RP representatives there

DO not fall into the trap!

Divide and conquer is the oldest trick in the book! Well done SDP and good on you RP for showing up to support!

BTW, Martyn, the MSM stories were all about the usual smokescreens about trustworthiness (Re:CST) and foreign funding - I do not see any change at all, just a little more subtle perhaps???

Martyn- You misunderstand -I have no issue with Chee. If I did I would take it to him. I a reader and a person named in your article address the comment to you as the author and 'citizen journalist'. I can't help feeling it was irreponsible of you not to check out some facts and I feel a more balanced picture would have been obtained had you mentioned the strong turn out by RP. I have an issue with your observation and the spin you put on it. After all we have the MSM if we want the opposition to be ignored.That's all no big deal.Thanks Kenneth

Dear Kenneth, I'll leave it to the readers to judge if I had committed any factual inaccuracy, or that I have, as you alleged, put a spin, criticised or ignored you and RP. Ordinarily, these would be pretty serious allegations to be levelled against anyone. But Singaporeans deserve more than tit for tat nit pickings.

Perhaps the MSM, knowing what side their bread is buttered on and seeing public perception gradually turn needs to make sure that they still have a job when the revolution occurs?

Nah...just kidding. That's giving them way too much credit.

So it appears that the SDP themselves are not being forthcoming? KP has sent a congratulatory message which they chose not to share. Also, it appears that you are only banked on criticising at all costs. What ever the government do, you appear to have mostly negative inputs, mnd you not that I support any of their policies. Do this die, do that also die... so what are you really expecting? do according to what you want or what Chee wants?

MSM writes and article on Chee. Shouldn't we be happy that the MSM is at least slowly opening up. You don't see KP at the celebrations, not only you don't check the facts, you conclude otherwise? Why should WP and for the matter CST join in SDP celebrations? Isn't this their perogative, and is this a MUST attend EVENT?

The matter with the congratulatory message is relevant.... sure it is not your problem but SDPs' However the problem is that you haven't got your facts correct before blasting your mouth off about KP which is disingenuos. Don't you at least owe him an apology instead of telling him to sort it out with Chee? and then try to talk it out about your spin on the article. What is there to sort out with SDP if Chee CLEARLY wants to CENSOR the congratulatory message, it is his perogative and choice. However, Chee should not go around claiming others censor him if that is what he himself is clearly doing. I do not believe KP is feeling agrieved as you seem to think, and which he restates in a later comment. He is just pointing out facts which you clearly have not bothered to check before writing your piece, and irresponsible as he put it. As a reader, well I may be wrong, but what I read is CLEAR that you are insinuating that KP is not present because of.....

"Whatever the motivations are, one thing is certain - Chee Soon Juan and the Singapore Democratic Party are not the sort to crave for mainstream media coverage. Anybody who knows Chee can attest that there isn't one Singaporean who distrusts the MSM more. In recent years, the party has resigned itself to the use of the internet and street hawking of publications to engage the citizenry."

If they don't crave to be repesented in the MSM, then why the continuous bitching on this. Afterall they have their internet and street hawking to promote their wares.

From what I recall, no congratulatory messages were read out so Martyn couldn't have put a spin.

As James Gomez said in the last elections, "Let's get back to the issues."

Seelan, please read what the issue is...

"Surprisingly, joining the list of absentees was a new kid of the opposition block, Kenneth Jeyaretnam of the Reform Party."

Why pick on KP? What is the purpose? especially if Martyn has not got his facts correct, and providing half truths?

"As James Gomez said in the last elections, "Let's get back to the issues."

Tell this to Marteyn, Seelan. Get your act together and don't patronize others in the opposition that are not from SDP.

I'm sorry you feel that offended, soojenn, but though I can offer my views, I can't be speaking for Martyn.

I also will not tell him not to "patronize other members of the opposition" because I don't think Martyn is that kind of person.