[ Read also More ex-detainees speak out : Political violence and the abuse of the ISA in Singapore ]

Tan Jing Quee and Michael Fernandez were the first ISA detainees to speak about their detention in 2006. Both men were detained in 1963 and again in 1977. It took them more than 40 years to talk about their imprisonment.

1977 saw the arrest of at least 28 people, mostly professionals. They were labelled “Euro Communists” by the PAP government. I was a young lawyer then and personally knew some of the people who were arrested. When they were released, none of them spoke about their experiences.

Earlier this month, Dr Ang Swee Chai who now lives in London, wrote about what she went through as a ISA prisoner in 1977. ISD officers had visited the hospital where she worked to arrest her. The hospital staff were so terrified of those plain clothes men that they interrupted her while she was performing an operation in order to inform her of their presence. I felt really sad for her as well as for my country when I read her note. Why do we have to respect the ISD so much that the hospital staff had to announce their presence even when she was performing an operation? I am glad Dr Ang was able to remain calm and successfully completed the operation.

It is clear from Dr Ang’s account that her experience had remained fresh in her mind for the past 34 years. She remembers graphic details of how she was arrested and treated in the cold room. She even remember her prison number.

From 1970 to 1979, 149 people were arrested under the ISA. Among them were prominent theatre practitioners Kuo Pao Kun and Goh Lay Kuan and writers like cultural medallion recipient, Yeng Pway Ngon. Yet none of them had until today, written about their experiences.

If ISA victims of the 1970s were silent until recently, those of the 1960s also suffer in silence. In 1963, Operation Cold Store saw the arrest of at least 145 people. Among them were prominent doctors, politicians, newspaper editors, journalists and trade unionists. How could the then Prime Minister Lee Kuan Yew and his cabinet ministers imprisoned fellow Singaporeans without trial for decades? Between 1960 and 1969, a total of at least 284 were detained. Among them were :

Chia Thye Poh, a member of parliament was imprisoned for 26 years and subjected to restrictions for another 6 years. I met up with Chia sometime this year. I was told by his father who is now in his 90s that Chia his eldest born was a brilliant student. He was a bookworm and was always at the top of his class. He did not participate in student activities. It was only when he became a lecturer at the Nanyang University that he became interested in politics. He stood as a Barisan candidate in 1963 and won. When he was arrested in October 1966 his mother suffered a stroke and had not been in good health ever since. Today, she is bedridden. Both parents are being looked after by his younger sister. Chia who has a doctorate degree, works abroad and returns home irregularly. Life is tough.

The PAP have wrecked many lives and deprived many parents of their children. There must be thousands whose lives were damaged by the ISA. Said Zahari wrote an account of his prison days in Dark Clouds at Dawn published in 2001. Low Miao Gong wrote briefly about her experience in “The Two Faces of Men in White” (published in The May 13 Generation). No others who were detained in the 1960s have to date written about their experience.

When Nelson Mandela was released after 27 years on Robben Island, he went on to become the President of South Africa. A Truth and Reconciliation Commission was set up to investigate the atrocities committed by the past government. Can we in Singapore ever expect such a Commission to be set up to investigate all ISA cases? Will I be able to see the repeal of the ISA during my lifetime?

On Saturday, 20 August 2011 at 2 p.m. at the Chinese Chamber of Commerce, friends of Tan Jing Quee will pay tribute to him for his contributions in re-writing the history of Singapore. Let us hope that their voices will bring change to our nation one day. 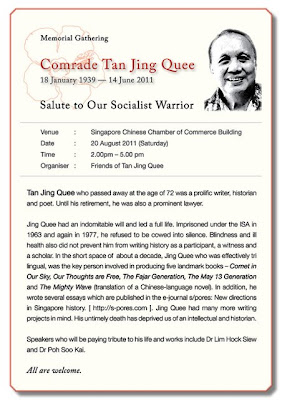 Let us hope the new President of Singapore becomes a voice for change and greater humanity.

I believe the President, as elected head of state, can and should advocate the abolishment of the ISA and its replacement with a proper anti-terrorism law. Such a law should ensure that anyone charged under it is brought to trial within a reasonable period of time.

Rajiv - sadly our common wish did not come true... However, out of the four candidates in the sham election that was, only one actually opposed the ISA - and was there ever much of a chance of him winning? (Although he did very well indeed...)

If you were at the event advertised at the end of the original post, you would have seen me confronting Tan Kin Lian about his stand in support of continued use of the ISA. This was subsequently misreported by The Online Citizen, and I have - belatedly - posted a stern and withering reply. If you are (or anyone else is) interested you can read it via the tweet here: http://goo.gl/1TL8U

The Online Citizen have done a very poor job of reporting this sham Presidential "election", and I hope that by shaming them we can elicit some clarifications and perhaps an article of apology. So please spread the word if you are sympathetic.

Brilliant riposte but I fear your comment came a bit too late for most readers, seeing that there are no posts after yours.

I agree with the thrust of your comment. Sadly, it will take at least a generation before we see higher standards of journalism in this country, a few flashes of gold here and there excepted. In "Manufacturing Consent" Noam Chomsky said:

“...what the media do, in effect, is to take the set of assumptions which express the basic ideas of the propaganda system, whether about the Cold War or the economic system or the "national interest" and so on, and then present a range of debate within that framework -- so the debate only enhances the strength of the assumptions, ingraining them in people's minds as the entire possible spectrum of opinion that there is.”