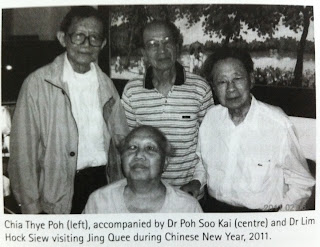 Dr Poh Soo Kai was detained under the ISA for a total of 17 years. A brilliant young doctor, he resigned from government service in 1961 in order to participate in politics. He was then an intern in Kandang Kerbau Maternity Hospital and was just awarded a scholarship for Obstetrics and Gynaecology training in UK. Together with Dr Lim Hock Siew they established Rakyat Clinic in Balestier Road.

Dr Poh would have been a great asset to Singapore's development had he not been arrested under the ISA on 2 February 1963 (Operation Cold Store) together with more than150 others.  He was then the Vice Secretary of Barisan Sosialis and had posed a serious political threat to the then prime minister, Lee Kuan Yew.  Released after 11 years, Dr Poh continued to be defiant. He called for the release of those who were still in prison, issued press statements, gave interviews and attended conferences, both in Singapore and abroad.

Towards the middle of the 1970s, several intellectuals began  thinking about the setting up a human rights society. Dr Poh was one of those interested in such a project.  But before any plans could take root, he was rearrested in June 1976. A few months later, all those interested in setting up the human rights society were  detained under the ISA. Dr Poh languished in jail for another 6 years.

When Jing Quee entered the University of Malaya and joined the University Socialist Club, where he was enormously active, especially in the production of its organ, Fajar, I had graduated and was very busy working in the hospital. The work-load was such that I seldom had the time to socialize with club members. As a result, I can’t say I knew Jing Quee really well at that time.

Operation Cold Store on February 2nd 1963, signaled the start of severe state repression of Singapore’s anti-colonial movement. Over 100 trade unionists and opposition political leaders were detained. Despite this prevailing atmosphere of fear, Jing Quee upon graduating, true to his conviction, courageously became a trade unionist, was appointed paid Secretary of the Singapore  Business Houses Employees’ Union and became the Assistant Secretary General of Singapore Association of Trade Unions (SATU), at its foundation. He joined the Barisan Sosialis and stood as its candidate in the September 1963 General Election, knowing full well the Barisan Sosialis and opposition anti-colonial groups had been so badly crippled so as to ensure victory for the PAP. In fact, the prediction of the U.K. High Commissioner’s office on the result of an election after Operation Cold Store, was extremely accurate. Only the date of the election was wrongly predicted.

When I was released at the end of 1973, Jing Quee had already been released, gone to the U.K. to study law, and had returned as a lawyer. He came to see me, and together with like-minded friends, we discussed the formation of a civil rights society – much like the NGOs of today. G Raman, Michael Fernandez, Ong Bock Chuan and I agreed to be in the pro-tem committee, whose membership would be enlarged by approaching Dr. Gwee Ah Leng, Dr. Un Hon Hing and Father Ho. Jing Quee did not join the committee. Later, he came to my house, and expressed serious concern that the PAP government would demonise the formation of this civil rights committee and use it as a pretext to re-detain me. He was to be proven right.

Coincidentally, shortly after, the Socialist International held a conference at Brussels in 1976. On the agenda was an item asking its fraternal member, the PAP, to explain the arrest without trial and prolonged detention of its citizens. Unable and unwilling to explain its fascist actions, the PAP sent Mr. Devan Nair to the conference. He was to withdraw the PAP from the Socialist International. At the conference he declared that he was acquainted with me, and that I am a Communist. That we were acquainted, is beyond doubt. I had helped his family financially while he was under detention. His speech must have been vetted and approved by Lee Kuan Yew whose Internal Security Department officials must have told him that I am not a Communist. ISD had written me a letter while I was in prison acknowledging that I am not a Communist. The stage was now set for my re-detention.

Jing Quee’s cautiousness in not joining the pro-tem committee however did not prevent him from being re-detained a second time in early 1977. Friends abroad, especially in Japan, demanded our release. Lacking a credible excuse, Lee Kuan Yew in 1977 in an interview with the BBC, claimed that I had gone with G. Raman in separate cars across the causeway to treat an injured bomber in Masai, Johore. He said he was bringing up my case before the Singapore Medical Council, so that I could be judged by my peers. But it was all a publicity stunt. I seriously doubted he intended to bring up my case before the Medical Council. After the BBC publicity, nothing more was heard. I received no summons to present myself before the Medical Council. Neither was it ever approached to reprimand me.

Upon my unconditional release in late 1982, Lee Kuan Yew’s press statement stated that I had been defiant but he was willing to give me a second chance. Defiance has now become a reason for detention. I suppose defiance was also the reason for Jing Quee’s second arrest. Perhaps I had shown my defiance not only in forming the Civil Rights Committee, but more so, as I had called him a “political pimp” in my statement upon my first release in 1973.

Jing Quee worked hard at his law practice. His silence was broken when in Feb 2006, together with fellow ex-detainee M. Fernandez, he described his detention at a public forum on “Detention – Writing – Healing” in Singapore. This forum was significant, as it was, after nearly a generation, political detainees for the first time identified themselves and addressed the public as such.

Noting the very favourable response, the PAP government came out with a warning: “ex-detainees will not be permitted to re-write history.” But the dyke has been breached. And fear receded. The internet gave access to news and views and questions and doubts, not printed in the press. Ex-detainees began to speak out and write about their experiences, and the tortures they underwent. There is an increasing demand for historical facts, for freedom of speech and assembly, and Singaporeans are no longer “dull.” They have begun to question the official version of the history of Singapore’s formative years, and to seek truth from the propagated myths, and question what has been dished out to them through the years.

Suffice for me to point out one example. Lee Kuan Yew in his memoirs stated that as he was working for the Japanese broadcasting at Cathay Building during the Japanese occupation. Hence, he was able to receive news before other Singaporeans of the impending Allied return to Singapore. He claimed he had discreetly disseminated the information. As such, he was afraid the Japanese authority would punish him for doing so if he were identified. It was a heroic act. He fled to Cameron Highlands to hide till the return of the Allied forces.

But after the publication of his memoirs, Mei Ling Chung Harding in her book, Escape from Paradise  stated that Lee Kuan Yew was working for the Japanese Intelligence. We may note that Intelligence is a very different sector from Broadcasting.

She was never sued for libel. If you believe her story, then logically Lee Kuan Yew’s flight to Cameron Highlands could not be to evade the Japanese, as claimed. I am sure this puzzle must be in the minds of most of you, and especially those who will be attending the Memorial service at Nilai tomorrow, in honour of those who died fighting against the Japanese aggressors.

Jing Quee has indeed opened the flood gates, and the latest election in Singapore is a testimony to the people’s desire for truth, transparency and free debates as well as to Singaporeans’ over-riding desire to discard fabrications, falsehoods and myths. In this, Jing Quee has done Singapore an enormous service, and lived the life he wanted to.

Further readings :
More ex-detainees speak out : Political violence and the abuse of the ISA in Singapore
What the left-wing stood for : Dr Poh Soo Kai
I'll forgive Lee Kuan Yew if he admits to his error and apologises to me : Lim Hock Siew
New PAP book neglects founding members detained for 19 years
Posted by MIng at 2:01 PM