Those who oppose Merger are fools : Lee Kuan Yew

On 16 September 1963, Malaya, Singapore, Sabah and Sarawak were formally merged and Malaysia was formed.

EXCERPTS OF SPEECH BY THE PRIME MINISTER, MR. LEE KUAN YEW, ON HIS MOTION ON THE MALAYSIA AGREEMENT IN THE LEGISLATIVE ASSEMBLY ON TUESDAY, JULY, 30, 1963.

"Sir, merger always has been of historical necessity and those who oppose it will, in Marxist phraseology, be buried by history. I think my colleagues and I on this side have read enough of Karl Marx to understand their thinking. Buried by history, Sir, is a phrase which means you are a fool. I mean “you” metaphorically. You went against the current and inevitable process. My colleague says it is not too late. I say, well, good luck to them. Maybe if they change, go to church and pray, or kneel down, count their heads, there is still time."

"In other words, you cannot have appointed a Chinese and say he represents Chinese. Shake him by the hand. And say, “Here you are. He is your leader”. That is not the way. Chinese or Malay, by leader it means he leads, he fights for the nation and for the section, for the community that he represents. In my case it has been my privilege to fight for the just rights of Singapore in Malaysia. And therefore I say we have a role to play in Malaysia, not to take over but co-operate." 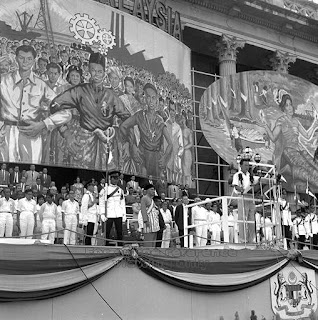 "There are two types – political undesirables and secret society elements. We have the right to request such a person shall not enter our State, just as the Federation will have – I saw in the newspapers today, someone mentioned “Sheikh Azahari”. It was not Sheikh Azahari I had in mind. What I had in mind was Said Zahari, the former editor of Utusan Melayu, who is a Singapore citizen. He came back to Singapore and he found the Federation causeway blocked against him and he never went back. Well, in the same way, we have got quite a number of gentlemen, Mr. Speaker, Sir, who do not add much to the prosperity of Singapore and, in fact, increased the general police expenditure, the C.I.D. expenditure of Singapore. I think they can well be looked after by the State from whence they came."

"You cannot govern Singapore on the basis that it is a small state and that you can squat on it. This is the vital heart of a throbbing region, a region in the midst of
flux and turmoil and revolution. This is the centre – a big market place and now with common market, the industrial base. Nothing can take away our natural
harbours, our airport. I do not know if Members have read hard-headed businessmen’s appraisal of Singapore after Malaysia. Share prices bear it out, land prices, land values bear it out. The Member for Farrer Park will know. There is no gain saying this. And we are prepared to share all this with Malaysia provided gradually over the years as we throw in more into the common pool, so our voice in national matters must increase."

"Sir, I would like to take this opportunity at the last meeting of the Assembly with these two powers – as I said when we meet again, I will have discharged my responsibilities, I hope completely, successfully without a blot on my copybook: no riots, no revolution, no arson; thirty days to go"

"Mr. Speaker, Sir, at last we have reached almost the end. Another 30 days. Midnight of 30th. One second past midnight, I hand over security, police, prisons, army."

The day when Singapore became part of Malaysia