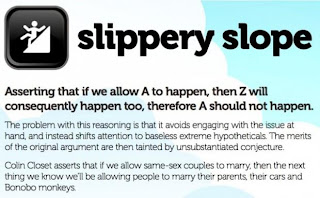 1. If we do not continue to import foreign workers, the economy will go into a tailspin and your daughters will end up as maids in other countries.

2. If we help the poor too much, we will end up a welfare state where nobody will work and everyone waits for handouts.

3. If we allow one person to protest, more will follow and there will be pandemonium on the streets everyday.

4. If we legislate a minimum wage, companies will fold and move elsewhere, unemployment will rise and the economy will crash.

5. If we do not pay our ministers well, we will attract corrupt and hypocritical office holders who plunder our reserves and ruin the country.

6. If we abolish the ISA, terrorists will run amok, bombs will go off and the country will descend into darkness.

7. If we allow every worker to withdraw their full CPF upon retirement, they will squander all their money frivolously and recklessly (on casinos and other ill-advised investments).

8. If we allow biased political films and cartoons, it will denigrate the standing of our political leaders and undermine the people's confidence in the government.

9. If we allow free discourse on race and religion, it will create social disharmony which will lead to a repeat of the 1964 racial riots.

10. If we allow the opposition to take over, garbage will pile up, assets will depreciate, investors will stay away, reserves will be squandered and the country is finished.

One more for the road.

“If you want to dance on a bar top, some of us will fall off the bar top. Some people will die as a result of liberalising bar top dancing… a young girl with a short skirt dancing on it may attract some insults from some other men, the boyfriend will start fighting and some people will die.” - Vivian Balakrishnan
Posted by MIng at 10:45 AM

It really kind of show what kind of mindset and substance are PAP leaders are, LKY included.