"The contents of the film undermine national security because legitimate actions of the security agencies to protect the national security and stability of Singapore are presented in a distorted way as acts that victimised innocent individuals"
- MDA, Sept 10

"People who were communist or sympathisers or activists.. Why should we allow them, through a movie, to present an account of themselves.. Which will sully the honour and the reputation of the security people, and the brave men and women who fought the communist, all those many years."
- PM Lee Hsien Loong, Oct 3, 2014

"Many of the individuals featured in the film were former armed communist guerillas. Unlike a book, a film can more easily arouse emotional responses and reach a wider audience. To allow public screening.. would be like allowing jihadi terrorist groups today to produce and publicly screen films that glorify their jihadist cause."
- Yap Neng Jye, Press Secretary to Deputy Prime Minister and Minister for Home Affairs, Oct 14, 2014 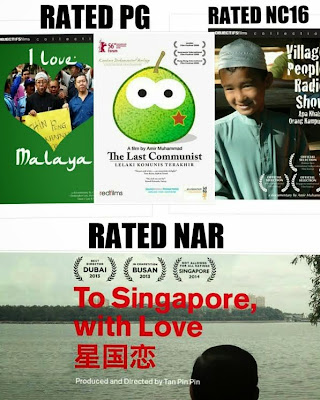 Here's why the Government's official reason for the NAR rating of Tan Pin Pin's 'To Singapore With Love' is utter bollocks, or at best, a red herring.

In 2006, MDA passed a film (rated PG) made by 5 Singaporean researchers and filmmakers entitled 'I Love Malaya'. While the premise of the documentary centres on the debate in Malaysia regarding Chin Peng's application to return to his hometown, much of the film's 45 minutes captures the lives and interviews of communist exiles in the Betong Peace Villages of Southern Thailand, the same place where Tan Pin Pin interviewed her subjects.

You can order the DVD here
http://www.objectifsfilms.com/product.php?id_product=17

In the same year, Malaysian director Amir Muhammad's film 'The Last Communist', which also features extensive interviews of exiles in Betong, was rated PG by MDA and given a commercial run in Cathay cinemas.

You can watch The Last Communist in its entirety here.
http://www.youtube.com/watch?v=sTM0BwgDXn8

In 2007, Amir's follow-up 'Village People Radio Show', which contained more interviews with communist exiles in Betong, was rated NC16 by MDA and screened in public.

You can order the DVD here
http://www.objectifsfilms.com/product.php?id_product=31

In 'To Singapore With Love', the story of the elderly exiles in Betong Village makes up a small segment. There are no central characters, just a tapestry of vignettes that offer snapshots into the lives of octogenarian (ex)-communists. The Betong Village story is like refreshment to whet the appetites for the main course of the film.

And what is the main course?

They are the depiction of the lives of political dissidents Tan Wah Piow, Ho Juan Thai, the late Francis Khoo and Dr Ang Swee Chai, and a small cameo by Said Zahari, whose interview film 'Zahari's 17 Years' remains banned (not NAR, but gazetted and criminalised). All of whom were not featured in the aforementioned documentaries passed by MDA.

So what is it about the four main characters in TSWL that frightens the government so much?

To be sure, none of them were communists, or much less accused of being one, although Tan Wah Piow was named as the mastermind behind the bogus 'Marxist Conspiracy' arrests of 1987.

There is hardly any mention of Francis Khoo or Dr Ang Swee Chai's appearance in the film by the Government. In fact, after the death of Mr Khoo, Dr Ang was granted a one-off visa to visit Singapore. It was her first visit in decades. Moving freely, the world-renowned campaigner for Palestinian rights gave public talks. No threat to national security there, although it is unlikely the government will grant the ex-ISA detainee a permanent stay considering her outspokenness on human rights abuses.

Tan Wah Piow and Ho Juan Thai were both cited by Dr Yaacob Ibrahim as having left Singapore illegally. And the Minister added that "both Ho and Tan can return to Singapore, although they cannot expect to be granted immunity if they are found to have flouted the law." Do both fugitives undermine national security? Not by a long shot, and this is supported by the absence of statements pinning them down as such.

So how does the film undermine national security?

It lies in the reason behind the police's investigation of the SDP in 2011 after the party organised a public forum featuring political exiles Francis Seow and Tang Fong Har speaking via teleconferencing.

It is also the same reason that moved the Government to criminalise my films 'Zahari's 17 Years' and "Dr Lim Hock Siew'.

And it is this.

From the Government's perspective, personal accounts by political dissidents and the humanising of their lives via the medium of a film or video presents an affront to the authority and the public image of the PAP Government, particularly of the Internal Security Department. It raises questions of past human rights abuses which undermine the legacy of Lee Kuan Yew and the PAP.

20 films that undermine the national security of Singapore
Allowing exiles film is “like allowing jihadi terrorist groups” to show film publicly
Let's talk about the past openly, warts and all
“To Singapore With Love” – the making of a new political folklore

The truth from a Singapore exile
Film on exiles, To Singapore, With Love, has four screenings at arts festival in London

Lee’s one sided broadcasts lacked legitimacy
Rebutting DPM Teo
What is the Government trying to hide?
Public records counter exiles’ claims: Sam Tan
The truth from a Singapore exile ll
Charges against Ho Juan Thai – errors in claims and contradictions?
The truth from a Singapore exile l
Appeal to reclassify rating of To Singapore, With Love rejected
Films Appeal Committee upholds rating for To Singapore, With Love
Posted by MIng at 8:26 PM