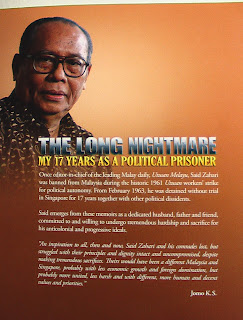 Despite the government's ban on Zahari's 17 Years, Said Zahari's latest memoir, The Long Nightmare - My 17 Years As A Political Prisoner, is now retailing at Select Books for S$19.30 a copy.

Even though both the film and book espouses similar content and opinions, the discrepancy of banning one but not the other was explained by the Board of Film Censors as such : "The impact of a book and a film is different. A film is more likely to reach a wider audience than a book and can more easily arouse emotive responses." (Straits Times Life!, April 14 2007)

Select Books is located at #03-15, Tanglin Shopping Centre, Tanglin Road. The film Zahari's 17 Years can be viewed in its entirety at google video.

And according to this post, the book is also sold at Borders and Kinokuniya (Ngee Ann City).
Posted by MIng at 5:32 PM