This article, written by Teo Soh Lung last December, was reproduced in Aliran in April 2012. I reproduce it here on the occasion of Mothers' Day. - Vincent Wijeysingha 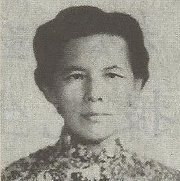 Madam Yap has been relieved of her lifelong suffering. May the PAP government one day realise the sufferings and hardship it has caused to thousands of families and ISA detainees, writes Teo Soh Lung.

How would a mother feel if her eldest son who is so bright and full of promise is imprisoned for no reason and without a trial? How would she feel when that imprisonment turned out to be so endless and so cruel, lasting 32 long years? Madam Yap Swee, aged 94, who passed away on Monday, 26 December 2011 after prolonged illness, was that mother. In the last few weeks of her life, she enjoyed the comfort of being with her eldest son, Chia Thye Poh, who took care of her day and night.

When Chia Thye Poh was arrested at the young age of 25, he was a legislative assemblyman. Three months after his arrest, his mother was taken seriously ill. Thereafter, her health continued to decline as she suffered many strokes, which left her bedridden. Till today, no one can forget the hardship she and her family went through. The family suffered in silence for 32 years and more.

When Mrs Lee Kuan Yew suffered a stroke and was physically incapacitated, her husband and children were by her side and she was given the best medical care. It was not the case with Madam Yap. The then prime minister, Mr Lee Kuan Yew, and his cabinet ministers did not even consider releasing her son on compassionate grounds or putting him on trial. He was literally left to rot in prison and his family left to fend for themselves.

Freed at the age of 57, Chia Thye Poh found it impossible to find meaningful work in Singapore even though he is effectively tri-lingual in English, Chinese and Malay and a Physics and Mathematics graduate of the now defunct Nanyang University. He was compelled to leave his mother when he accepted a scholarship to do his postgraduate studies at the Institute of Social Studies in The Hague. He went on to obtain a doctorate there. His work abroad took him away from his beloved mother and family.

Madam Yap is now relieved of her lifelong suffering. May she rest in peace. And may the PAP government one day realise the sufferings and hardship it has caused to thousands of families and detainees with its ruthless use of the Internal Security Act.

Finally, may we all be vigilant and be prepared to speak out against injustice.
Posted by MIng at 3:23 PM