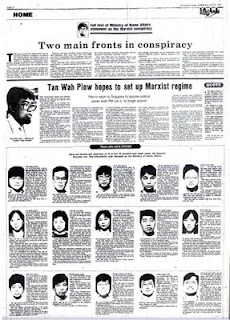 At 5 am on the morning of 21st May 1987,  loud ringing of the doorbell and banging of the door woke me. I went to the door and looked through the peephole. There were a number of people standing outside. I knew immediately that they had come for me. I rushed to inform my husband and my aunts. Chong, my husband went to open the door.

A man called out my name. He said, “If you cooperate, we will not search other rooms.”

They entered my small room, which was less than 120 square feet. It was filled with boxes. I had just moved back to live with my two elderly aunts, a retired school principal and a teacher in a HDB unit after leaving home 12 years ago. I was supposed to look after their well-being and not give them trouble. I felt really bad that my arrest had to happen in their presence. I wanted to call my mother who lived next door. But I was not allowed to do so. I wished I was Sun Wu Kong who could fly away or disappear. My aunts were really calm. They cooked a traditional Teochew breakfast for me: plain porridge with a few dishes.
I sat glumly as they looked through my belongings piece by piece.  My mind wandered back to the old days.

I became a student activist in my third year at the University of Singapore’s Arts and Social Sciences faculty. That was in 1974. After seeing posters put up by the Students’ Union (USSU) calling for help for the Bangladeshi flood victims, I joined the union with the relief effort, which required me to draw posters and go from door to door to collect donations of clothes and shoes.
A few weeks later, the 28th President of the USSU, Juliet Chin, participated in the demonstration of the Tasek Utara squatters in Johor Bahru. A developer had demolished all the squatter huts to make way for a golf course, which resulted in the victims marching to City Hall in Johor to protest. Juliet and two other USSU members were later arrested by the Malaysian authorities.

In the following year, the 29th President of USSU, Tan Wah Piow, was charged for rioting at a workers’ union office. The month’s trial that followed increased my political awareness.
I later became the Welfare Secretary of the 30th Students’ Union. In that year, I was passionate about the plight of the urban poor living in areas such as Bukit Merah. I witnessed eviction of people in areas such as Clementi and Marsiling. Residents were evicted from their kampungs in the name of national development and settled into HDB flats. I visited these residents and tried to help them obtain better compensation from the land office.

Many arrests were made in the late 1970s by the ISD, including the legal advisor to USSU.
Eventually, I left the university without obtaining a degree and opened a bookshop.
While the ISD officers conducted their search, I had breakfast with my aunts.

During the two hours, they took out all my books from the boxes under the bed. After they concluded their search, they were about to take me away when my fifth aunt shouted, “Wait! You have to drink this bottle of Essence of Chicken that I warmed up!” This chicken essence later gave me the energy to tolerate hours of questioning.

My father, Lim Cher Kheng Francis, was involved in politics in the 1950s. He was elected  a legislative assemblyman and participated in the negotiations for Singapore’s independence from Britain. After retiring from politics in 1959, he became a successful businessman in the 1970s. However, in the 1980s, his business declined and his property was acquired by the authorities. As a result, my family had to move into HDB flats.

He was in China for business when I was detained. When he heard the news, he flew back immediately and stomped into the ISD office at Phoenix Park. He demanded to be arrested in exchange for my release. Of course, his offer was rejected.

A few months later, during one of the family visits, my father brought a Chinese brush, an inkstone and some paper for me. He said, “Since you have lots of time now, you should practise Chinese calligraphy.”

I told him that I had too many things in my mind and was not in the mood to write. “This is the best time to practise,” he insisted.

And he was right. Writing and reading helped me stay calm and maintain my sanity.

I was a rebellious child and made my family worry a lot. I am grateful for all the support they had given me during my detention. My father and my aunts have since passed away, but their love remains a source of strength for me in facing difficulties in life.

For more profiles and reflections of former detainees,
http://remembering1987.wordpress.com/
Posted by MIng at 3:36 PM