9 Aug 1965 - Suddenly, Singapore was out .. And gained independence

Today, on 9th August 2005, as Singaporeans celebrate 40 years of sovereignty and independence, it is worthwhile to note that 40 years ago on this day, the mood was anything but celebratory. Rather, according to these reports from the Straits Times, the Singapore Government had seemed more intent to publicise its mourning over the Separation than revelling in the formation of an independent nation.

Did the PAP really thought that Merger with Malaysia was feasible? Did Lee really harbour an ambition to be the Malaysia's Prime Minister? Was the concept of a Malaysian Malaysia a realistic one? Did Singapore earn its independence by virtue of its exit from from Malaysia? What exactly are we celebrating on National Day?

The full account of Singapore's road to independence has yet to be written. Through these excerpts from the press archives, I hope to have contributed a little in providing a fresher perspective than just the pomp and pageantry of National Day Parades.

Meanwhile, I still have a police investigation to worry about... 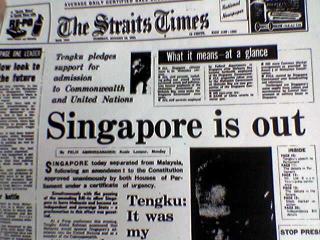 Singapore today separated from Malaysia, following an amendment to the Constitution approved unanimously by both Houses of Parliament under a certificate of urgency.

Simultaneously with the passing of the amending Bill - to allow Singapore to leave Malaysia and become an independent and sovereign State - a proclamation to this effect was gazetted.

At a Press Conference this evening, Tengku Abdul Rahman annouced that Malaysia would sponsor Singapore's admission into the United Nations and as a member of the Commonwealth.

At his own press conference in Singapore, Mr Lee Kuan Yew called on his people to remain firm and calm. His eyes brimming with tears: "What has happened has happened. Everybody will have a place in Singapore and will continue helping the Malays in competition with UMNO."

Today's dramatic turn follows the secret signing of the Independence of Singapore Agreement last Saturday by leaders of the two Governments.

THis document provides a treaty on external defence and mutual assistance between the two Governments and stipulates that:

BOTH GOVERNMENTS will establish a joint defence council for external defence and mutual assistance.

THE MALAYSIAN GOVERNMENT will give "reasonable and adequate" assistance for Singapore's external defence. In return, Singapore will contribute a "resaonable" number of units from its own armed forces.

THE MALAYSIAN GOVERNMENT will continue to maintain military bases within Singapore and will be permitted to use these bases for defence purposes.

NEITHER GOVERNMNTS will enter into any treaty or agreement with a foreign country which may be deterimental to the independence and defence of either.

Meanwhile, Singapore acted swiftly to establish itself as an independent State, completely unconnected with the mainland.

In the early hours of the morning, while Singapore slept, coded messages were being flashed to about 20 heads of Governments abroad - explaining the situation.

Mr Lee Kuan Yew stayed up all night to get these messages out. With him were most of his Cabinet colleagues who have had little sleep since the big break began on Saturday.

Sharp on the hour, Radio Singapore went on the air to announce the separation.

Television came on at 4.30 pm, two hours ahead of schedule, with a telecast of the Prime Minister's press conference.

The news spread swiftly through the city after the radio annoucement. In a number of places, it was greeted with a thunderous explosion of fire-crackers.

Police patrols throughout the island were intensified. The force had been alerted two days before.

"I herewith instruct you as from Aug. 9 1965 to take orders from Mr Lee Kuan Yew, Prime MInister of Singapore, in order to enable him to discharge his responsibility for the internal security of Singapore."

"In the absence of the Tun, I take full responsibility in giving you this instruction.

"As from Aug 9 1965, you are to take instructions from Mr Lee Kuan Yew, Prime Minister of Singapore, as he is now onward in charge of the defence and security of Singapore. Other orders will be issued in due course."

Meanwhile, all Malaysian flags fluttered down and were replaced by Singapore flags by noon. 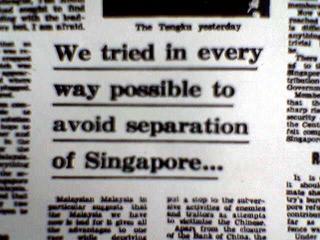 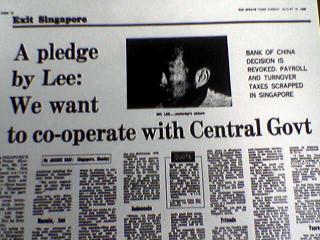 Forty years ago this week, Singapore was kicked out of the Federation of Malaysia by Prime Minister Abdul Rahman, who believed Lee Kwan Yew's politicking was stirring up racial animosity. It was a stunning rebuff to the relatively young Lee, who just two years before had led the island into Malaysia in the teeth of opposition at home. But Lee and Singapore rose to the challenge of independence. The rest of Malaysia did, too. It has prospered and has remained intact, confounding skeptics who viewed mostly non-Muslim Sabah and Sarawak as unnatural additions to the Federation.

So, what seemed to many a disaster, a new source of instability in a Southeast Asia still beset with Communist insurgencies and Cold War divisions, has so far had a reasonably happy result.

The 1965 split was in practice quite gradual - the two countries had one currency until 1973 - but time has eroded the shared experiences of their British-trained elites. Malaysia and Singapore remain joined at the hip by geography and history, but their different evolutions over those 40 years are crucial to the survival of a working relationship.

A few random observations may shed some light on these issues. The Malays of Malaysia should be a lot less defensive now than they were in 1965. The non-Malay percentage of its population, once more than 40 percent, has been declining because of the much higher Malay birth rate. Malaysia's overall population is growing faster than Singapore, which has one of lowest fertility rates in the world. Malaysia's economic growth may have been slower than Singapore's, but Malays now have a significant role in an economy once controlled by Chinese and foreigners.

But if Malays have gained confidence, they have also drifted apart socially from non-Malays on both sides of the causeway that separates Malaysia and Singapore. Religious practices imported from Arabia and Iran, such as ubiquitous head scarves for women and enforcement of dietary and other social rules, have changed the face of Malaysia. The more sensual, fun-loving ways and artistic traditions that date from Malaysia's pre-Islamic past are increasingly hidden, in contrast to Indonesia's more relaxed, plural society. Singapore's secular puritanism, for its part, grates against the rigid Islamist aspects of Malaysia.

Malaysians as a whole, however, do share a certain pride in the country's greater openness of political debate, the existence of thriving opposition parties and the degree of democracy within their governing party, which they contrast with Singapore's tightly controlled politics and treatment of opposition figures.

Although ties are still numerous, non-Malay Malaysians have also drifted somewhat from their Singapore counterparts. For 20 years, Chinese in Singapore have been encouraged to speak Mandarin. In Malaysia, Hokkien and Cantonese are still the norm.

Malaysian Chinese fret about the commercial and educational disadvantages they suffer in the name of creating racial equality in wealth and education, which can often degenerate into corruption. The institutionalized discrimination introduced in Malaysia after 1969 has no overt equivalent in Singapore. Yet many ethnic Chinese businessmen find it easier to make money in Malaysia, even after paying for Malay participation, than in a Singapore economy dominated by politically protected government corporations and by foreign multinationals that are often offered tax concessions. The traditional entrepreneurial talents of overseas Chinese may find more space in Malaysia than in Singapore, where diplomas and formal skills are the key to advancement.

Malaysia has sacrificed some economic growth for racial wealth distribution. Singapore, with its huge compulsory savings program, has sacrificed economic freedom on the altar of investment-led growth driven by state-controlled enterprises. In both cases they have ended up, via different routes, with stock markets that are dominated by huge government-linked companies.

Malaysia has borrowed many ideas from Singapore and in doing so has raised its own levels of competitiveness, for example in attracting multinationals and competing for port and aviation business. At the same time, Singapore has been forced to realize that its prosperity depends on its neighbors' success at least as much as its ability to be a player in global finance or electronics.

Thanks for dredging these things from the archives. I doubt any of us would get to read them otherwise.

Hey I've heard u've made a Chee Soon Juan film. Really admire ur courage. I also have plans to make a JBJ documnetary for my school documentary project. I doubt the school will allow it. At the same time, I'm not sure whether I will kena hunt down by Lee Govt if I really made one.

But who really cares? It was a fantastic PR opportunity, they used it, and even better, it worked. Spontaneous replacement? Planned replacement? All that's needed is the belief of spontanenity, and there persists the myth. The fun thing about this is that the majority of people won't penetrate the illusion - that is, the illusion worked - and anyone who sees through it is just going to seethe, oh my god, these people are evil and manipulative! While everyone else doesn't actually listen. Or care. Oh, sure, some do, like the Vast Internet Hordes, but no one's actually /concerned/ about it - they have better things to worry about like, oh, is that an income tax cut I see? Yes it is!

The doctrine's been realpolitik for a long time. Realpolitik isn't nice, but it's very effective, if pulled off properly. Unstable - Wilhelm II took power, the kaiser's an idiot, Bismarck fell out of favor, Everything Rapidly Went To Pieces, and we all know what happens next. But while you have an effective government that, mind you, hasn't apparently arrested anyone for political subversion yet recently, it's a very practical doctrine to follow.