Part X of the retrospective on Singapore's road to independence 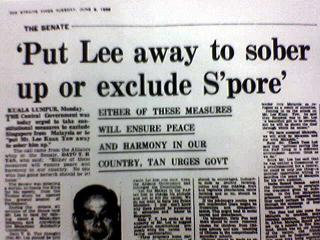 The Central Government was today urged to take consitutional measures to exclude Singapore from Malaysia or to "put Mr Lee Kuan Yew away to sober him up."

The call came from the Alliance whip in the Senate, Dato T.H. Tan, who said,"Either of these measures will ensure peace and harmony in our country. No one who has gone berserk should be let loose."

The Senate was debating a motion to thank the king for his speech from the Throne when he opened the present session of Parliament.

During the debate, all sections of the House took Mr Lee to task for talking about a Malaysian Malaysia and convening the Malaysian Solidarity Convention.

Dato T.H. Tan thought that Mr Lee should be told on no uncertain terms that Malaysia could do without Singapore.

If Mr Lee persisted in his "anti-Malay and his unpatriotic conduct", constitutional steps should be taken to separate Singapore.

Appealing to the public "not to follow Mr Lee", Dato Tan said,"There appears to be little doubt that Mr Lee through his words and deeds is stirring up emotions and causing dissension.

"The man must be stopped before irreparable harm is done. Mr Lee is trying to split the races here and to partition our country.

"It was on the basis of inter-racial unity that Tengku Abdul Rahman and his colleagues won independence for us. Now this very unity is being undermined."

"He added: "Let Mr Lee stew in the Communist soup bowl that is Singapore. If he does not think much of the Communists, then let us release Lim Chin Siong and other comrades and let us see how Mr Lee can stand up to them, face to face, man to man."

Referring to his concept of a Malaysian Malaysia, Inche Ahmad sais: "Mr Lee is doing nothing except to irritate the feelings between the non-Malays and Malays."

He accused Mr Lee of trying to get rid of the Malay Rulers and the head of the nation.

"Mr Lee is trying to get rid of all Sultans and make this country a republic with himself as the president. Perhaps he is not satisfied with Islam being the State's religion."

He told the House: "Let Mr Lee spell out exactly what he wants. Let him show when the Alliance Government had infringed the Constitution.

"Let the Malays in the PAP tell him to change his attitude and not to kill our nation. We do not want to have two Prime Ministers."

Dato Dr Cheah Toon Lok said that "political parties like the PAP living in a different envirnment cannot think as we do."

Since Mr Lee has said that he was neither a Communist or a pro-Communist but a neutral, he could be only one thing - a political opportunist willing to sacrifice the peace of Malaysia for his own ambition.

Inche Saidon bin Kechut described Mr Lee as a "troublemaker with a hatred of the Malays and who wants to destroy them."

He was also greedy for power. "Not satisfied with being a dictator in Singapore he is now seeking to extend his power. He now wants to control the Central Goverment." 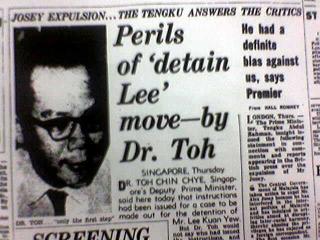 Dr Toh Chin Chye, Singapore's Deputy Prime Minister, said here today that instructions had been issued for a case to be made out for the detention of Lee Kuan Yew.

But Dr Toh would not say who had issued the instructions, and to whom they had been issued.

At a press conrference in City Hall this afternoon, he said: "I personally do not wish to enlarge on the matter, but I would say that those in the Government who are responsible for such matters know that we know.

The press conference had been called to explain the Singapore Government's stand on the expulsion of free-lance journalist Mr Alex Josey and "attempts by extremists in the Alliance, particularly the UMNO," to have Mr Lee arrested.

Dr Toh opened the conference with the announcement that the entire Singapore Cabinet was solidly united on this matter.

The expulsion of Mr Josey was only the first step towards the suppression of liberalism in Malaysia's political field, he said.

Then, reading from a prepared statement Dr Toh said: "If the Central Government continues to placate these extremist elements, further respressive measures must be taken which must lead to the break-up of Malaysia.

"Another demand was the arrest and detention of Mr Lee Kuan Yew." 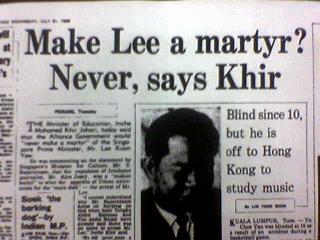 He was commenting on a statement by Singapore's Minister for Culture, Mr S. Rajaratnam, that the expulsion of freelance journalist, Mr Alex Josey, was a "makan kechil" to whet the appetite of UMNO extremists for the "main dish" - the arrest of Mr Lee Kuan Yew.

"I cannot understand why Mr Rajaratnam keeps on harping on this when both Tengku Abdul Rahman and Tun Abdul Razak have already said there was no move to arrest Mr Lee," Inche Khir said.

"We will never make a martyr of the Singapore Prime Minister. All this hope of impending arrest exists only in the minds of the PAP leaders."
Posted by MIng at 3:17 PM