Some Singaporeans are "not sufficiently discerning", so we should continue to ban 'political' films, says the Minister for Information, Communication and the Arts (MICA) Dr Lee Boon Yang.

Below is an excerpt of the article published by the Straits Times on August 5, 2005. 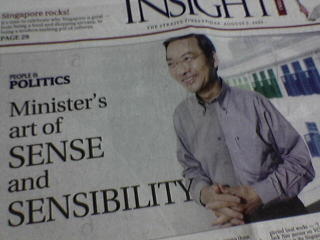 SINGAPORE was recently ranked 147th out of 167 countries on the press freedom index.

But it is not something that Dr Lee loses sleep over.

Singapore has developed a "different model for its media" - one that "worked well over the years".

He is confident that Singaporeans find local media "credible".

"Singaporeans find the newspapers, whether it's the Straits Times, Lianhe Zaobao or Business Times or other newspapers, highly respected newspapers. If the Singapore newspapers are not credible, I don't see them being around for so long.

"Now if Singaporeans do not trust our newspaper, don't forget we have in circulation in Singapore today 4,500 foreign publications. They will turn more and more to alternative sources.

"And yet Straits Times is able to preserve its readership amidst all this challenge and continues to grow. So I take it as a strong endorsement, as a sign of its relevance and credibility to the society."

As for the Government's policy on censorship, he says: "Censorship should be in tandem with a society's development and evolution of social norms. The guidelines change as society changes."

Do the arts and media - as opinion leaders - have a role in pushing social boundaries?

"Certainly there's some truth in it that the arts, film, cultural practitioners are there to experiment and push the norms. Yes, I accept that.

"But the Government should not join them in pushing it up rapidly at the expense of the vast majority not yet comfortable with such an avant garde approach."

And even as Singapore evolves, he stresses, there are certain fundamentals that do not - and cannot - change. "We're a young nation, multiracial, multi-religious; there are always weak points in our society that can be exploited."

This concern about the faultlines in Singapore's young society is behind the ban on political videos.

Film and video are "emotional media" that "can arouse all kinds of reactions without an opportunity for the rebuttal to be made effectively."

"I think that Singapore people are intelligent and mature. And I think they can make their own judgement.

"But there may some who are not sufficiently discerning and if one day something goes wrong, then we will have to repair the damage."

Negative articles on the Government, on the other hand, are "part of the democratic debate."

But it will be "unhealthy for the media to emabark on crusading journalism".

Whom do these curbs benefit?

"I'm saying it's for Singapore, not for the ruling party alone, not for the Government. You're helping Singaporeans be better prepared for a world that is going to be more challenging."
Posted by MIng at 10:55 AM

Anonymous said...
This comment has been removed by a blog administrator.
11:13 AM

Anonymous said...
This comment has been removed by a blog administrator.
11:15 AM

An irony, if you consider how the local authorities make criticisms against foreigner officials. (Eg, visiting of war shrine by Koizumi.)

Perhaps what is even more disturbing, the goverment line is apparently that they are happy with the current state of affairs, and see no need to improve the situation in any fashion!

maybe someone can start a "ST Online alternative" with "open-source"-journalism? that way we can dethrone our "beloved" ST while feeding readers with local news.