Power to the people?

States 'not run by people's will' 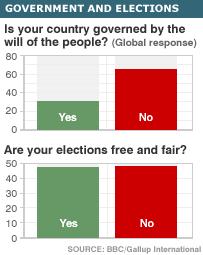 Sixty-five percent of citizens across the world do not think their country is governed by the will of the people, a poll commissioned by the BBC suggests.

The Gallup International Voice of the People 2005 poll questioned more than 50,000 people in 68 states for the BBC World Service survey about power.

Only in Scandinavia and South Africa do the majority believe that they are ruled according to their wishes.

But 47% thought elections in their countries were free and fair.

The survey also found that only 13% of people trusted politicians and only 16% thought they should be given more power.

About a third of those asked thought more power should go to writers and academics.

A quarter felt more should go to religious leaders - who are also seen as the most trusted group.

A fifth of those asked thought military, business leaders and journalists should be given more power.

Other key findings include:

Sixty-one percent said a partner or family member has most influenced decisions about their life in the past year.

In Mexico, the figure is 88%. The lowest rating for family influence comes from North America (35%), where people report a wider range of influences, especially religious leaders (12%).


There is a wide gap between the developed and developing world on the degree to which people feel they can control their lives
Least control is felt in Africa, the Asia-Pacific region and the former Soviet bloc.


National identity is still strong
Nationality was used by a third of those surveyed to 'define' themselves. About a fifth chose religion.

The sense of nationality is strongest in Latin America (54%).

Religion gained the highest scores in Africa (56%), followed by the US and Canada (32%).

East Asians from wealthy countries are more likely to feel they have control over their lives, a new poll suggests.

Those from South Korea, Japan and Singapore feel they have the most power to alter their own destiny.

In contrast, those surveyed in Vietnam, one of East Asia's poorest countries, feel there is very little they can do to change their own lives.

Gallup International questioned nearly 9,000 people in East Asia for the BBC's Who Runs Your World? survey.

Respondents were asked who had power over their lives, who they trust and if they have the power to change their own lives.

The BBC World Service commissioned the Gallup International Voice of the People 2005 poll of more than 50,000 people in 68 countries.

Nationalism is an important part of the East Asian identity: More than a third of those surveyed found it more important than religion, ethnicity or continent.

In South Korea, 73% of respondents considered their nationality more important than anything else.

In terms of who they trust, East Asians are more likely to look up to intellectuals, journalists and religious leaders than the military and business elite.

That is apart from the Japanese, who appear to trust virtually no-one.

Over 70% of the Japanese surveyed do not trust either military, religious, business or political leaders - perhaps surprising when you consider the fact that the ruling Liberal Democratic party has been in power almost continuously for the last 50 years.

Democracy does not appear to be alive and well in the region.

Fewer than 30% of East Asians believe that their country is governed by the will of its people.

This is even more remarkable when you consider that people from some of the least democratic countries - such as Burma, North Korea and China - were unable to take part in the survey.