'Singapore You Are Not My Country'

"If you care too much about Singapore, first it’ll break your spirit, and finally it will break your heart." - Alfian Sa'at


Mr Alfian Sa'at, one of Singapore's brightest literary luminaries, was recently dismissed from his relief teaching job by the Ministry of Education. And it happened in spite of the fact that some of his writings have been approved, lauded and taught in classrooms run by the government. Much debate has since ensued, inspired no less by the Ministry's reticence in stating any specific reason for this abrupt termination of service. 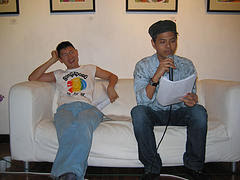 
Rather than chipping in my five cents worth into the fray, I thought I'll just re-produced three of my favourite poems by Alfian here.

But first I'll let you in on a little-known fact about the current Minister for Education, Mr Tharman Shanmugaratnam: In his days as a student at the LSE, he would visit the home of exiled dissident Tan Wah Piow to engage in an 'underground study group', along with other Singaporean students residing in UK at that time. Upon his return to Singapore during the early 80s, he was immediately hauled up by the ISD for a series of interrogations, but no arrests were made at the time. However, some of the other members of the 'study group' were eventually arrested and detained in 1987's 'Marxist conspiracy'. It is not known if Mr Shanmugaratnam was questioned again in 1987.

The Interrogation Room
I imagine they took you to a room.
You were led to a chair
And there might have been a table.
There was a pen scathing
Or a tape recorder spool twisting
Your words back on itself.

"Are you a Marxist?
Which hand would you use
To hold the Constitution?
Do you talk in your sleep?
Which of the stars
Of the national flag
Represents death?
What kinds of friends
Have shared your cigarettes
Or rolled over in bed
Stretching his or her hand
To find you absent,
And believed that
You had been taken away?"

You finally cleared your throat
As if pushed
Onto a funeral podium
To deliver a eulogy
For a man you did not know.

What is a word?
A needle's ballet
Stitching the chasm
Between a yes and a no.


Mr Chia Sits In His Dark Cell
For Chia Thye Poh, detained without trial under the ISA for 32 years

"I was put in solitary confinement in what was called the 'dark cell'. It's not an ordinary prison cell. It's totally dark, totally quiet. usually you could not hear or see anything either inside or outside your cell. To intimidate me, the Internal Security Department officers told me that prisoners held in such cells go totally insane in just a few days. One of my first nights there, I could hear someone in the next cell violently kicking his cell door. Hearing that noise, I thought someone really had gone insane." - Chia Thye Poh

When the sun finally greets him like a stranger
Mr Chia will keep his mouth firmly sealed
A man who has eaten darkness will not let any light enter
The cave of his blind organs his speechless bones.


Singapore You Are Not My Country

Singapore you are not my country.
Singapore you are not a country at all.
You are surprising Singapore, statistics-starved Singapore,
soulful Singapore of tourist brochures in Japanese
and hourglass kebayas.
You protest, but without picketing, without rioting,
without Catherine Lim,
but through your loudspeaker media, through the
hypnotic eyeballs of your newscaster,
and that weather woman who I swear is working
voodoo on my teevee screen.
Singapore, what are these lawsuits in my mailbox?
There are so many sheafs, I should have tipped the postman.
Singapore, I assert you are not a country at all.
Do not raise your voice against me,
I am not afraid of your anthem
although the lyrics are still bleeding from
the bark of my sapless heart.
Not because I sang them pigtailed pinnafored
breakfasted chalkshoes in school
But because I used to watch telly till they ran out of shows.
Do not invite me to the podium and tell me to address you properly.
I am allergic to microphones and men in egosuits and publicwigs.
And I am not a political martyr, I am a patriot
who has lost his country and virginity.
Do not wave a cane at me for vandalising
your propaganda with technicolour harangues,
Red Nadim semen white Mahsuri menses
the colourful language of my eloquent generation.
Your words are like walls on which truth is graffiti.
This has become an island of walls.
Asylum walls, factory walls, school walls,
the walls of the midnight Istana.
If I am paranoid I have learnt it from you,
O my delicate orchid stalk Singapore.
Always thirsty for water, spooked by armed archipelagoes,
always gasping for airspace, always running to keep ahead,
running away from yourself.
Singapore why do you wail that way, demanding my IC?
Singapore stop yelling and calling me names.
How dare you call me a chauvinist, an opposition party,
a liar, a traitor, a mendicant professor, a Marxist homosexual communist
pornography banned literature chewing gum liberty smuggler?
How can you say I do not believe in
The Free Press autopsies flogging mudslinging bankruptcy
which are the five pillars of justice?
And how can you call yourself a country, you terrible
hallucination of highways and cranes and condominiums ten minutes'
drive from the MRT?

Tell that to the battered housewife who thinks happiness
lies at the end of a Toto queue
Tell that to the tourist guide whose fillings are pewter
whose feelings are iron
whose courtesy is gold whose speech is silver whose
handshake is a lethal yank at the jackpot machine.
Tell that to my imam who thinks we are all going to hell.
That that to the chao ah beng who has seven stitches a
broken collarbone and three dead comrades but who
will not hesitate at thrusting his tiger ribcage into another fight
because the lanterns of his lungs have caught their own
fire and there is no turning back.
Tell that to the yuppie who sits in meat-markets disguised
as pubs, listening to Kenny G disguised as jazz
on handphone disguised as conversation and loneliness
disguised as a jukebox.
Tell that to all those exiles whose names are forgotten but
who leave behind a bad taste in the thoughtful mouth,
reminding us that the flapping sunned linen shelters a
whiff of chloroform.
Tell that to Town Council men who feed pigeons with
crumbs of arsenic.
Tell that to Maria Hertogh a.k.a. Nadra who proved to us
that blood spilled was thicker than water shed as she
was caught pining under a stone angel in the nunnery
for her husband.
Tell that to Ah Meng, who bore five hairy bastards for our nation.
Tell that to Lee Kuan Yew's squint.
Tell that to Josef Ng, who shaves my infant head admidst a
shower of one-cent coins, and both of us are pure again.
Tell that to my Warrant Officer who knew I was faking.
Tell that to the unemployed man who drinks cigarettes
smokes tattoos watches peanuts
unselfconscious of his gut belch debts and wife having an
affair with the Salesman of Nervous Breakdowns.
Tell that to Maya Angelou's who are screeching like
witches United Nations-style poems populated by
Cheena Babi Bayee Tonchet Melayu Malas Keling
Garagok Mat Salleh.
Tell that to the fakirs of civil disobedience, whose head-
phones are pounding the hooving basslines of
Damyata Damyata Damyata
Tell that to the statue of Li Po at Marina Park.
Tell that to the performance artists who need licences like
drivers and doctors and dogs
when all they really need is just three percent of your love.
Tell that to the innocent faggot looking for kicks on a
Sunday evening to end up sucking the bit-hard pistol-
muzzle of the CID, ensnared no less by his weakness for
pretty boys naked out of uniform.
Tell that to the caretaker of the grave of Radin Mas.
Tell that to Chee Soon Juan's smirk.
Tell that to the pawns of the Upgrading Empire who
penetrate their phalluses into heartlands to plant Lego
cineplexes Tupperware playgrounds suicidal balconies
carnal parks of cardboard and condoms and before we
know it we are a colony once again.
Tell that to Malaysia whose Desaru is our spitoon whose
TV2 is our amusement whose Bumiputras are our
threat whose outrage is our greater outrage whose
turtles are weeping blind in the roaring daylight of our cameras.
Tell that to the old poets who have seen this piece of land
slip their metaphors each passing year from bumboats
to debris to sanitation projects to drowning attempts
to barbed neon water weeds on a river with
no reflections a long way off from the sea.
O Singapore your fair shores your garlands your GNP.
You are not a country you are a construction from spare parts.
You are not a campaign you are last year's posters.
You are not a culture you are poems on the MRT.
You are not a song you are part swearword part lullaby.
You are not Paradise you are an island with pythons.

Singapore I am on trial.
These are the whites of my eyes and the reds of my wrists.
These are the deranged stars of my schizophrenia.
This is the milk latex gummy moon of my sedated smile.
I have lost a country to images, it is as simple as that.
Singapore you have a name on a map but no maps to your name.
This will not do; we must stand aside and let the Lion crash
through a madness of cymbals back to that darkjungle heart
when eyes were still embers waiting for a crownless
Prince of Palembang.

Finally, a more recent work
Death of a Tyrant

it will not rain on the day of your passing.
the ground will be the sort that will not yield a grave.
fountains will be turned off, men will arrange chairs
near sun-dusted windows, watching as if expecting
your black-suited procession to visit their streets.
you will refuse, of course, to fit into your coffin,
and they will have to anchor down the eclipses
of your eyelids over those outraged suns.
they will parade you, a gulliver,
with one hundred corpse-bearers taking turns,
because anyone within three feet of you
will sweat at the palms. there will be
junctions where citizens will want to spit
at your passing, but the memory of fines
will keep them mum. what an entourage
it will be, with the walkie-talkied mourners
throwing affidavits like hell money,
(for nobody but you could endure so much
damages in one lifetime), the sunglassed
actresses turning your acronym
into orgasms of mourning, and the cwo
sweepers blushing from behind.
and heading it all, a frisky lettuce-lion, to yap
at the invisible (unlawful?) gathering of hanged ghosts
who will weave for you, like a mute band of brothers,
a wreath of nooses, soiled as stillborn snakes.
your eulogy will be an edifice of fire,
sheer lightning in a cloudless sky,
(O architect of charisma, glorious historical weeper)
a baptism that will char dead trees into totems.
in life, your snort was a decree, your fart a sermon.
in death, a nation's silence will follow you to the grave.
only then will you know what it means to be exiled,
only then will they know what they have
been holding their breaths so long for:
the stench of your corruption,
and the clear, newborn coughing,
on a dawn-rinsed, tearless morning.