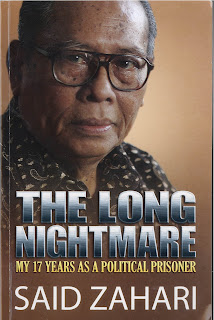 After a year-long delay, Said Zahari will finally launch his much-awaited book.

Originally slated as 'The Long Nightmare - My 17 Years of Life in Lee Kuan Yew's Prison', the book's title has since been amended, at the behest of Utusan Publications, to 'The Long Nightmare - My 17 Years As A Political Prisoner'. Its contents, however, remains unchanged. The autobiography is the second installation of a planned trilogy by the former editor of the Malay-language daily Utusan Melayu, for whose brief involvement with the anti-colonial political opposition in Singapore culminated in his arrest and detention under Operation Coldstore in 1963.

Said Zahari is the only former long-term political prisoner to publicise his experiences of detention under the ISA in Singapore. His first book, 'Dark Clouds At Dawn', was published in 2001 and is available locally. ' Zahari's 17 Years', a documentary I had made about his years in detention, has been banned by the Singapore Government. In a recent statement explaining the reason for the film ban, the censors said that unlike a book, a film is likely to reach a wider audience and can easily "arouse emotive responses." 'Zahari's 17 Years' has since been uploaded for viewing on google video; and then uncharacteristically anchored two weeks later by a public remark from Minister Mentor Lee Kuan Yew that "all this censorship makes no sense."

Although Said is now a Permanent Resident of Malaysia, he has retain his Singaporean citizenship. In a recent conversation over the phone, he expressed his wish to visit Singapore soon to promote the book. It is unlikely that the Singapore Government will impose any official ban, but local distributors and retailers may be fearful of carrying the title.

'The Long Nightmare' is published in three languages - English, Mandarin and Malay. There are two launch dates - one for the Chinese edition and another for the English and Malay editions.

The author will be present on both dates. 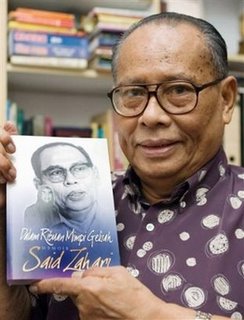 Said Zahari shows his latest memoir in front of his books collection at his home in Kuala Lumpur, Malaysia, Saturday, March 25, 2006. Said Zahari, who was arrested in 1963 and detained without trial by Singaporean authorities for 17 years has written a memoir detailing his experiences as a political prisoner and hopes the book will provide a different perspective of the political events that shaped Singapore's road to independence in 1965 and its first decades of nationhood. (AP Photo/Andy Wong)
Posted by MIng at 12:23 PM

where can we get the book? Who is the publisher?