They came first for the communists ...

20 years after the "Marxist conspiracy" arrests, the jail cells of the ISD are again filled with more prisoners held without trial.

This week, the Ministry of Home Affairs announced the arrests and detention of five "self-radicalised" Islamic "militants", including lawyer and former rock musician Abdul Basheer Abdul Kader. They were arrested in the period between November and April. It seems that the use of the ISA has become so secretive that the time lapse between such arrests and its public announcement has widened considerably. Perhaps the interrogation teams now require more time to break their prisoners before the word gets out.

The Straits Times also reported that there are now 34 people detained under the ISA for alleged "terrorism" activities. What they don't tell you is that there may be an additional five prisoners held for alleged "espionage", and whose names and identities the Ministry has not disclosed. Probably nobody has bothered to ask - it's none of our business anyway.

Here's that famous poem from Pastor Martin Niemöller. It works best as a template. Change the context to suit your own political situation and it should hit home. 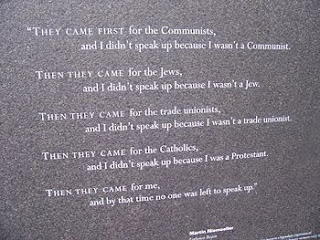 terrorism is the new communism.

A new target to focus on, in a bid to distract us from what really goes on