For the past two days, residents in the upmarket apartments on St. Martin's Drive, located off Tanglin Road, have been enjoying free security reinforcements by courtesy of the Singapore Police Force. About a dozen plainclothes officers have been loitering at the road's entrance since Sunday in an attempt to intimidate members of the public from participating in a petition signing exercise outside the Burmese Embassy.

This video says it all.

The police worked on rotating shifts. I arrived at about 11pm on Sunday night and saw a different team from that shown in the above video. Asians arriving on foot or in vehicles had their identity cards checked and subsequently warned that they may be investigated for public assembly should they proceed to the embassy. Curiously, as officers continue to harass the Asians, most of them Burmese nationals, two cars carrying Caucasians whizzed by me. As one officer trained his video camera lens on me, I thought I repay the courtesy, and then some. Below were some members of the team from the Central Police Station stationed on St. Martin's Drive around between 11pm until 1am. 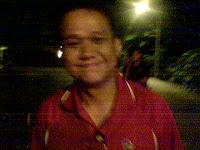 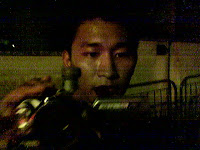 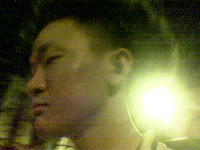 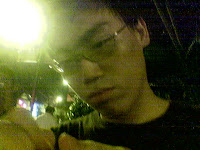 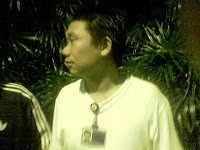 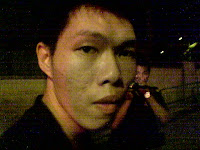 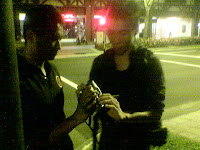 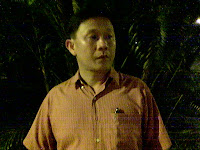 When a permit is required for compassion - disgusting

More pictures
Posted by MIng at 12:09 AM

i heard that those myanmar nationals who signed chee's anti singapore government petition might get deported. wtf...

If they do get deported it will raise more international stink for the despotic red dot LOL. Fear tactic as usual.

Great idea about taking their pictures and posting them! Those officers should be ashamed of themselves! Though "just doing their job," so are the Burmese military officers who fire on peaceful protesters. So were members of the Nazi SS. Thank you for documenting their names and pictures, so historians can record their names with the correct group of oppressors.

Stop the Junta and Atrocities in Burma said...

Petition From Singapore to End the Oppression in Burma

Good shots of our doggie force. Do continue to document them.

This is what struck me. (1) Expressing empathy for the Burmese people must be done by 5 or less persons in a revolving door manner. E.g., 4 persons together touch the gate of the embassy, move on, then another group of 5, and so on. (2) We need a permit to cry in groups of 5. (3) Even Burmese are not allowed to protest in front of their embassy against the killings of Burmese by the Burmese military and police. How very thoughful of the Singapore police to worry about pulic safety and law and order. I don't think I (and my children) want to be a part of a society that feels nothing and do nothing after witnessing such atrocities. If even a simple act of signing a petition is illegal and would be "under investigation", may God (in whatever form) help us!

It's really funny for these officers to be photographed. For once, these police officers ended up looking like 'The Usual Suspects'.

Another case of laughing stock for Singapore.

Shame on you, men in blue! When the day of reckoning comes, saying you were following orders will not excuse you. Hitler's Gestapos were following orders, and so were Stalin's thugs. Mao's Red Guards were doing the same, but at least they have the decency to be brain-washed and to idolise Mao. Saddam Hussein's security forces were following orders too. Use your brain and examine your conscience. Ask for reassignment, call in sick, throw up on your superior's desk; find any excuse to get out of this immoral duty!

Aiyo, from their looks, I can gather these joker uncles will spend their handsome ISD police salary in Geylang or some KTVs after knockoff time one....

To those officers caught in print for history

They call themselves police, but in reality they are nothing more than thugs and gangsters doing the biddings for their political pay masters. You work for an amoral greedy and scheming boss (e.g. Dulai) you will end up being labelled as one yourself whether you like it or not.