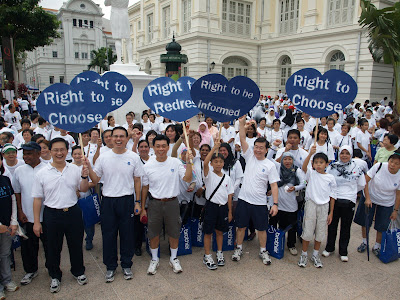 A public assembly near Singapore's Parliament House to commemorate World Consumer Rights Day. "Thousands of participants" took part in the "nation-wide" march, including a ministerial guest-of-honour. Picture taken on 18th March, 2007 and can be seen here.


but not for human rights. 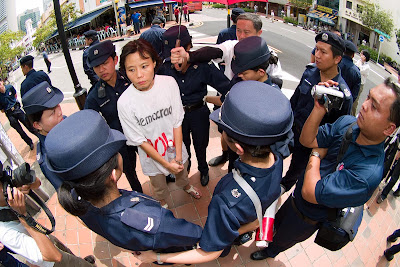 A member of the opposition Singapore Democratic Party is surrounded by police as she and five others attempted to stage a pro-democracy march towards Parliament House during the IMF-World Bank Meetings held in Singapore. The activists are currently under police investigation. Photo was taken at Hong Lim Park on 16th September, 2006. 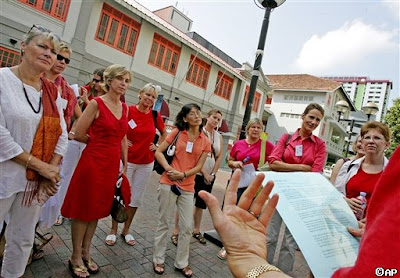 Expatriate women gathered on Waterloo Street in Singapore as part of a global action in to support the brave in Myanmar. No report of police videotaping in the vicinity. Not known if police are investigating. Picture taken on Friday, 28th Septermber, 2007 by AP and can be found here and here and here.


while Asians get harassed. 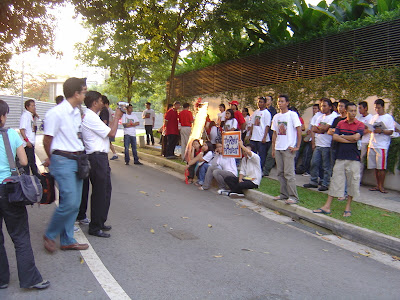 Police [left] are seen videotaping Burmese nationals gathered around the petition table outside the Burmese Embassy in Singapore. Police is investigating. Picture taken on Sunday, 30th September, 2007 by TOC and can be found here.

Soldiers hunting down dissidents in Burma

"We have photographs. We are going to make arrests!"

Junta dragging residents from beds in terror patrols at night

Meanwhile, it's business as usual for Singapore Inc. 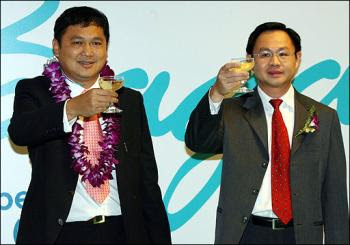 Tay Za(L), Chairman of Air Bagan and a close business associate of General Than Shwe, and Lim Kim Choon, Director-General and Chief Executive Officer of Civil Aviation Authority of Singapore, toast at the launch of Air Bagan’s maiden flight to Singapore after its arrival at Changi International Airport on September 7. Photo and report by AFP.
Posted by MIng at 10:33 AM

I am a very good boy. I have learned everything from the PAP education. When I start to work overseas and S'pore is in trouble - gets invaded, gets shitted on, gets insulted - DON'T call me for support OK? I don't want to offend my host country by protesting or even sign a petition.

We Singaporeans are perceived by many to be politically apathetic. However, this is one of the few occasions where we take a stand and publicly express our abhorrence at what the Myanmar military junta is doing to its people, we are subjected to intimidation by the Police. Very strange !

Our Singapore policeman taking photos of protesters are not very different from those Burmese soldiers who shoot at civilians and monks. They are just taking orders.

They should quit if there's no honour in their jobs.

Yes, they are simply taking orders blindly?????????
The 'pink run' was another good example

I really don't understand Myanmar military junta, why so much of killing and bloodshed. Why can they do it the decent way, and have a ISA act. Just label all the protesters communist and throw them in. Get a few to confess and your done. Does not matter if the biggest trading partner is also the biggest commi in the world..They just don't learn do they..

Myanmar should copy the tactics of Singapore and put in place laws that can deal with dissdents.

No need to use raw force.

Just use law like ISA or cannot gather in public loh.

Dissidents all label as commie loh.

No need to have evidence also.

Expats go when their terms are up. Locals stay and they can vote.

Now, who is really afriad of voters?

From BBC (3/10/07) News Website:
"'Sleep deprivation'
But the Burmese authorities have shown no signs of responding to international pressure. ... A former Burmese political prisoner, who spent a decade in jail for criticising the regime, said it was safe to assume from his own experiences that many of those detained would be tortured.
"The monks will have a very hard time," he said. "I was blindfolded and subjected to sleep deprivation. They interrogated me in shifts for 11 days." "
Wait a minute. Wasn't that what the detainees in our 1987-1988 laughable "Marxist Conspiracy" revealed to us before they were re-arrested for revealing this to us? Our current PM then made the famous retort to the effect: Hey look, chums, being interrogated is not like attending a tea-party you know.

The Burmese thugs are taking a leaf from our ISD ..erhm.. officers. Or is it the other way round? Now I understand the meaning of "cross-cultural" exchanges. School lessons should be taught this way; then I will get "A*s" for all my subjects.

I just wonder how great can a country be if its leaders are devoid of compassion.

So LKY, I have completely lost my respect for u & yr PM son when both of u chose not offend the Myammar junta.

I Dun Koe Y Since A Few Yrs Back, I M So Tempting To Go Overseas Sooner Or Later In The Near Future. Tot It May Not B Safe Or Stable S Compared To Sg, I Will Still Wana Try.

Chanllenging 'Our Social Conventional Truth'.
Michael Moore Is My Inspiration Aft Watching 'Sicko'-At Least He Enhanced My Belief Abt The Outside World.

Lets exposed those under cover Dogs!