At the funeral parlour this afternoon, Kenneth Jeyaretnam related to us how despite warnings from doctors about his father's heart condition, JBJ kept putting off medical treatment until such a time when he could finish his immediate task.

And what was this task that was so urgent? He had been toiling in court to bring the Singapore Government to bear for not holding a by-election after a PAP MP had passed away recently.

He didn't have to do this, nor did he have to form a new political party, or to revive his law practice. At the age of 82, he should have long retired, as both of his sons are successful professionals.

Even to his last day, he battled for justice, for accountability, for a free Singapore. He gave away his life, literally, to the pursuit of genuine democracy in Singapore. 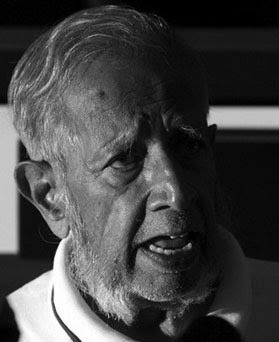 The opposition has lost a determined fighter. My condolence and sympathy…. However, I’m sure JBJ in heaven would not want us to stop fighting the PAP. Let’s continue JBJ’s fight to stop the dominance of 1-party politics in Singapore. Let’s strive to bring true democracy to Singapore by encouraging Singaporeans to vote for pluralism in our politics. Feel free to join me to continue the fight at http://forums.delphiforums.com/3in1kopitiam/messages

I have found JBj's ideas much ambitious & far-fetched for s'pore where people are more worry about $$$ than anything else.However,he has a huge fan base here in s'pore and he keeps up the fight against the PAP system for what he belives is right for the country..

At a rally in 1996 ,JBJ captured my imagination as a democracy fighter.He is a great politician that can moved crowds and has teeth.

He also has credibility unlike oppositions we have in s'pore today ,sadly..I think we might not see another like him in s'pore for a while.

So Rest In Peace JBJ.

He also has credibility unlike oppositions we have in s'pore today ,sadly..I think we might not see another like him in s'pore for a while.

There is still Dr Chee and the SDP. They are continuing the fight started by JBJ.

The problem with people who only worry about $$$ is that they will lose more when they continue to allow the country too controlled only by a single party... no competition, no independance in any watchdogs or pressure groups.. so to borrow and old English proverb.. Penny wise Pound Foolish !

There is some consolation that I get from reading the Net with regard the demise of Mr JB Jeyaretnam. And that is there are many who pledged(vowed?) openly to carry on the unfinish fight for the betterments of our society with the Regime.

If only some of these pledges are actualized, it will spell hope for the people of Singapore.

It is my wish and hope that Mr JB Jeyaretnam will inspire some, including current oppositions, into actions for the good and wellbeing of all.

He was fixed so many times but he was never bought.

I know he's in Heaven because his life on earth in Singapore was made hellish by the Kiasi and Kiasu.

Philip said,'He felt when your time's up, time's up. He was very much at peace with himself and with what he had done with his life.'

Unlike the Kiasi and Kiasu, Mr Joshua Benjamin Jeyaratnam did not need people to fear him. His integrity, perseverance, tenacity and not being 'beholden' touches many people who respect, admire and love him for what he stood and fought for.

He has touched many and the responses of those he touched will begin to make Singapore a better place.

Our condolences and praises would mean nothing if we ourselves do not take the fight to the PAP.
I cannot think of a better way to honour JBJ, a true Patriot.

Jeya, you are a true patriot and you make me proud to be a Singaporean.

Please know that your life's work is not wasted and has enrich each one of us.

Rest in peace my dear friend. We will remember you for your tenacity, vision, sense of justice, and most importantly, your love for your fellow people.

The best condolences the Lees and Goh and the PAP could give to JBJ is for the old Lee to attend the wake and service of JBJ (to show how gracious he is, which he obviously is not), go down on their knees before JBJ's dead body to pray for forgiveness and return all the money that they have gotten from JBJ to a charity.

He JBJ is lion whom has fade off , but always rememeber in our heart forever . A great Freedom fighter .

LKY's own words against the establishment in his early political career:

" Let us shake off this oppressive shroud of sycophancy and unquestioning homage to authority. For if we just drift along, we may get to a position where it is not only wrong to talk, but also wrong to think. History is full of chronicles of how a robust and hardy people will always TRIUMPH over adversity. In the end, it is those who have the guts, the endurance and the stamina, who will overcome all difficulties and come into their own." LKY.

JBJ has done more than this for the country and his countrymen he so loved. WE SHALL NEVER FORGET HIS SACRIFICES.

In the eyes of God, JBJ had certainly TRIUMPHED over his detractors, opportunists, traitors, sycophants, hypocrites.

There will be a time for retribution not from fellow humans, but from the Supreme Being.

JBJ has triumphed as far as genuine love and gratitude of the people is concerned.

As someone so correctly reminded all of us,"In an age where millions dollars are demanded to serve a Nation, JBJ parted millions to serve his People"

May his Soul Rest in Peace and May God Bless Him and his Family and Descendants.

There are so many nuggets and beautiful speeches and valid points made by JBJ, which did not see the light of day in the local press..If these were published in the local press, it will further show to the people the extend of JBJ 's commitment and loyalty to Singapore and his beloved countrymen; and brilliance that would have outshone many of the leaders of the ruling party.

Please get the book, if you can.
I just bought the book at the Wake.

Sporeans will feel sorry for his loss. But no one will say or do anything about it... It will take another 50-100 years before he makes it to our history textbooks as a great leader who fought for civil liberties till his last breath. My condolences to his family.

Given JBJ's sad passing and the 'relaxation' on political films, perhaps its time to find out whether we can see 'A Vision of Persistence', the famously banned student documentary about JBJ. I wonder if it even still exists outside of MDA archives.

Some days ago, I sent a request to the Ministry of Information, Communications and the Arts (MICA), Media Development Authority (MDA) and Ngee Ann Polytechnic to release and screen a banned JBJ film. This is MICA's response and my follow-up.

Thank you for your feedback addressed to PS [Permanent Secretary] MICA.

In his National Day Rally speech, the Prime Minister has set the direction for reviewing our current laws on party political films. The Government accepts that our policies must evolve to remain relevant in the current media landscape. It is no longer realistic to disallow all forms of party political films.

In line with this direction, the Films Act is currently being reviewed. The amendments have to be passed by Parliament and the amendments are likely to be tabled early next year.

Your reply only addresses one aspect of my query. From your reply, I gather that you are trying to impress upon me that a politician's death does not make a film non-political. Thus, if and when the amendments are passed by Parliament, the banned film about the late J B Jeyaratnam can be released and screened. Correct?

There was one other aspect to my query. Would Ngee Ann Polytechnic and Media Development Authority be willing and able to produce a more comprehensive documentary about the late J B Jeyaratnam?

If Ngee Ann Polytechnic does not wish to undertake this public service, can other film-makers apply for funding from Media Development Authority to make films about the late J B Jeyaratnam? What is the likelihood of MDA approving such a funding request? And how can one increase one's chances of having a funding request for a film about the late J B Jeyaratnam approved?

Well done for pressing that button. However, I think that all the tapes pertaining to the film were seized, and so this is an interesting case - where material once confiscated, might now be allowed, but can it be returned, and to who?

Anonymous said...
This comment has been removed by a blog administrator.
6:45 PM